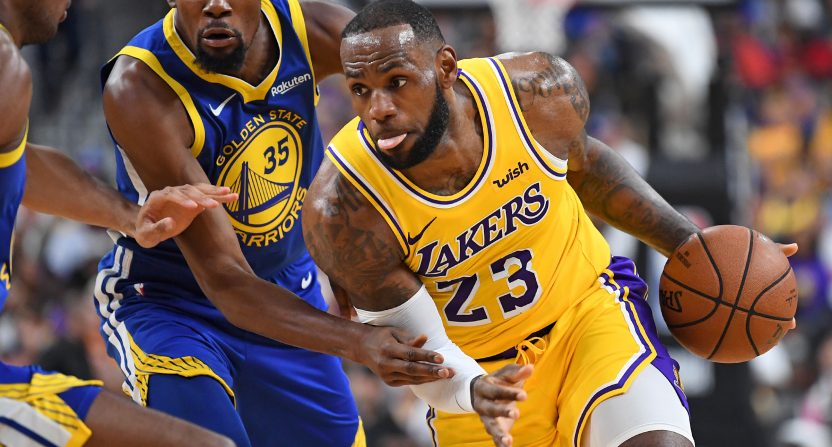 If you evaluate NBA markets’ television ratings individually, the local ratings news at the all-star break seems positive, with a Sports Business Journal analysis finding that regional sports networks’ NBA ratings were up in 15 of the 28 markets considered (data wasn’t available for Memphis and Toronto). However, as authors John Ourand and John Lombardo emphasize in that piece, the overall picture is much worse and much closer to the ratings drop seen on national NBA broadcasts, with ratings dropping an average of 10 percent across the board at the RSNs considered. The small gains at many networks don’t offset the much larger drops at others, and some of the biggest drops came in large markets.

The largest drop of all came in Cleveland, where Fox Sports Ohio’s Cavaliers ratings are down 56 percent year over year. That’s not surprising, considering they went from a 50-32 team that finished first in the East and made the NBA Finals with LeBron James to a team that’s 12-46 this year and second-last in the conference without LeBron. (But hey, that might make FS Ohio, one of the former Fox RSNs up for sale by Disney, look a little less attractive to buyers.) A similar decline happened in Chicago, where the Bulls are down 36 percent on NBC Sports Chicago after falling from a 41-41 record and a first-round playoff appearance to a 29-53 mark so far, third-worst in the East.

But some other notable downturns have happened in cities where the teams’ performance hasn’t fallen off as dramatically; the Knicks are down 41 percent on MSG (they’re 11-47 and last in the East, but their 29-53 record last year wasn’t all that great), and the Celtics are down 27 percent on NBC Sports Boston despite a 37-21 record (fourth in the East, a downturn from the 55-27 season they posted last year, but not exactly off a cliff). And even three of the top five teams in RSN ratings (the Warriors, Thunder and Spurs, first, second and fourth respectively in local ratings) saw year-over-year declines (of 16, 10 and 34 percent respectively). Interestingly, though, Spurs’ executive vice president Lawrence Payne told SBJ their downturn is partly a correction after years of growth, and partly about fans migrating to streaming platforms (he cites double-digit growth there) that aren’t yet fully counted in ratings:

“We were due for a regression,” Payne said. “We were outperforming year in and year out. We have had a big setback. The good news is that ratings have rallied of late and will continue to rise. The thing that remains to be seen is how streaming, as it continues to grow, is factored into the equation.”

The SBJ piece also covers the current state of national NBA ratings, which is a little more positive than when we discussed it in November (TNT broadcasts were down 26 percent at that point, with ESPN ones down six percent), but still not great. TNT broadcasts are now down 18 percent year-over-year on average, and NBA TV ones are down 17 percent. However, the ABC and ESPN broadcasts are holding up better; ABC’s down only three percent, and ESPN’s ratings are flat. But still, on average, the NBA is seeing a significant ratings decline on both regional and national fronts. The streaming caveat Payne mentions is a notable one, though, and the NBA isn’t the only place where we’re seeing TV ratings decline while streaming numbers rise.

There are some positives to be found in these ratings as well, of course. While it doesn’t compensate for the aggregate audience loss, 15 of 28 markets seeing year-over-year growth in RSN ratings is a good sign for the league, and one that suggests there’s still interest in a lot of teams even in an era where only a few appear to be actual title contenders. And doing better on the court does seem to still produce ratings surges, with the Denver Nuggets (up 85 percent on Altitude in a season that has them in second in the West so far, a jump from last year’s ninth-place finish) leading the way there; there’s also hope for teams like the Dallas Mavericks (second with a 74 percent gain despite still not being in playoff position, probably thanks to excitement around Luka Doncic). Of course, having LeBron helps, as the Lakers are fourth with a 42 percent gain on Spectrum SportsNet (notable considering the size of their market). But year-over-year consistency can also pay off, as the Utah Jazz (+58 percent on AT&T SportsNet Rocky Mountain) and Houston Rockets (+33 percent on AT&T SportsNet Southwest) also saw gains despite slightly worse (but still playoff-worthy) records.

And there are plenty of other elements that can be considered, especially when it comes to LeBron. His move west has hurt a bunch of early national broadcast windows, and he also hasn’t played in a bunch of games thanks to injury; that definitely affects the audience. And LeBron’s Lakers (currently 10th in the West) aren’t generally seen as a title contender this year, so there’s presumably less interest in them from neutral fans than there was when he was on the Cavs. That’s likely to change next season if they make some big additions through trades or free agency (which everyone expects), and that should help the ratings a bit.

But it’s still notable that the NBA is seeing these downturns both nationally and locally, especially considering that it’s not that long ago that everyone was citing it as a sport still growing in contrast to declining NFL ratings. NFL ratings are still much larger, and they bounced back a bit this year (apart from the Super Bowl), and now it’s the NBA seeing some drops. There are plenty of differences between the two leagues and their ratings, especially considering the NBA’s much larger number of games (which leads to its RSN broadcasts, something that doesn’t happen in the NFL), but the “The NBA is rising while the NFL’s falling” narrative can definitely be put on hold for a while. This year’s declines aren’t necessarily a sign of doom for the NBA, but they do indicate that its ratings aren’t always just rising.