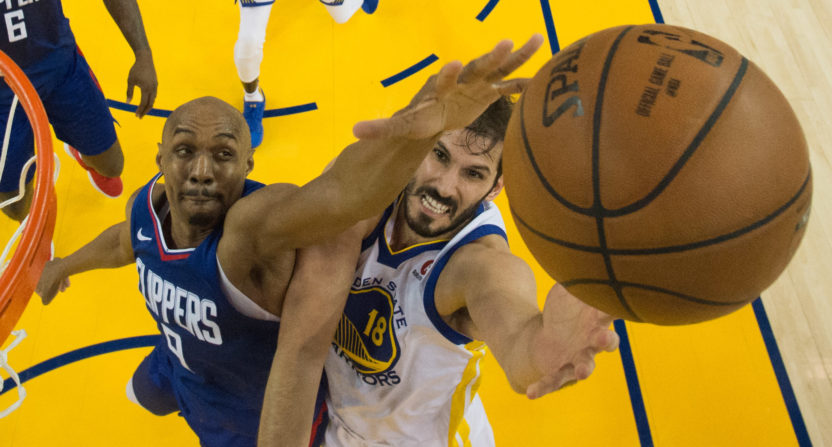 Plenty of the sports ratings stories lately have been about declines in the traditional viewing metrics, from the NFL to NASCAR to the Olympics, but that’s not the case with the NBA. We recently discussed the league’s seven per cent jump in local ratings, with 17 of 30 teams rising there, and that trend is also obvious on a national scale. And what’s also interesting is that in contrast to many sports with aging viewer bases, the NBA continues to succeed with younger viewers.

As per A.J. Katz in AdWeek, the national ratings have been historically good this year across broadcasters, and young viewers are a key reason why:

Per Nielsen data, the combined average TV viewership for NBA national broadcasts on TNT, ESPN, ABC and NBA TV is 1.4 million viewers, which is up 17 percent from the 2016-2017 regular season and the most-watched start to a season since 2012-2013. That’s also the biggest ratings growth in North American pro sports, and outpaces the majority of linear television, which has largely seen ratings decline. The growth is particularly strong among the younger demographics that TV advertisers crave, including adults 18-34 and 18-49, unlike Major League Baseball, which remains most popular among Baby Boomers.

“This is a very tough, coveted demographic we’re talking about here, and a tough one to reach in a linear way,” said Turner Sports ad sales evp Jon Diament. “NBA fans do not watch traditional TV. They’re often male, young and millennial. … They typically don’t have the traditional viewing patterns that you’ll find in the TV landscape. Then, there’s the viewership offline, on social and on digital, whether it’s the live games or anything around the league. That’s exploding as well.”

Further to that point, here’s some ratings demographic data Turner Sports sent to Awful Announcing for their TNT and NBA TV broadcasts ahead of last weekend’s All-Star Break:

The NBA broadcasts on ABC and ESPN have also done very well, including ABC drawing the highest Sunday Showcase rating since 2015 for this week’s Cavs-Celtics game. So, it’s clear that the NBA is finding ratings succes, and that younger viewers are a strong portion of that. And that’s a continuation of what we’ve seen recently, with the NBA average audience checking in at only age 42 in a Sports Business Journal survey last year (second-lowest amongst the sports considered, ahead of only MLS). But why does the NBA do so well with younger viewers? Well, Diament and others told AdWeek that the league’s personalities and storylines are a key factor:

“The league is culturally relevant, globally, and competition on the floor has been amazing,” said Diament. “You have a lot of powerhouse teams with a lot of superstars on them. There have been a lot of stories, a lot of trades, a lot of drama, all of which are keeping fans interested and engaged.”

…“The nuances of the NBA game allow for a better platform to market the league,” said former Warriors CMO Chip Bowers, who recently left the organization for MLB’s Miami Marlins. “You only have 10 players on the court at a time … with no helmet or hat on. They become recognizable.”

…“The NBA and its players are very effective at reaching fans through social media, said Paul Hardart, marketing professor at the NYU Stern School of Business. “They’ve done a great job with connecting with broader cultural trends, whether it’s with music—Drake and Jay-Z citing the game in their songs—or fashion, to the point where the NBA has become its own fashion brand to some degree.”

So, there’s a lot that many younger viewers like about the NBA, and that’s before you get to players’ activism, which the league actually supports:

“There’s a long tradition in the NBA going back to Oscar Robertson and Bill Russell to people who were passionate and engaged on important social issues,” said NBA CMO Pam El as she reaffirmed the league’s support of its players. “It’s a culture that’s been passed down from player to player.”

Or, consider the studio shows, which have often proven funny, entertaining, and worth tuning in for. That’s a significant contrast next to other sports. And it’s perhaps especially notable as compared to the incredible seriousness of everything surrounding “THE NATIONAL FOOTBALL LEAGUE.”

At any rate, the NBA’s approach seems to be working for it, both nationally and locally. And the degree to which younger fans appear driving those ratings is also a good sign for the league. Yes, there are still questions about if the ESPN and Turner mega-deals for the league’s national broadcast rights will prove to be good value in the long run, but for now, the NBA looks like a pretty solid league to be televising.