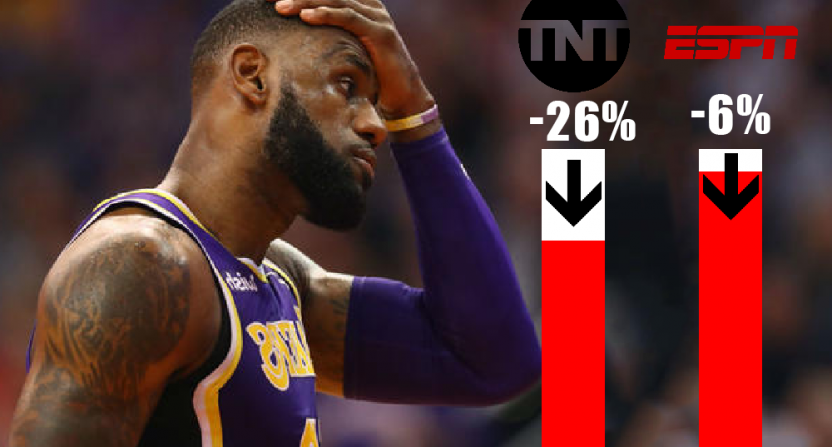 There’s been a lot of talk about the NBA as a star-driven league, and that certainly seems to extend to the TV ratings too. Sports Business Journal‘s Austin Karp writes that some of the big drops in the NBA ratings so far this season are likely thanks to LeBron James’ move to the Los Angeles Lakers, as it’s been the eastern half of doubleheaders that’s particularly declined:

NBA viewership is down 26% on TNT and 6% on ESPN one month into the season. Much of the sharp decline can be attributed to LeBron James’ move to the Western Conference, which has hit viewership for the early-window primetime NBA telecasts particularly hard so far. TNT is averaging 1.79 million viewers after 12 game telecasts, the net’s slowest start to a season in at least a decade.

There’s been discussion of the Western Conference as stronger overall for years, but having likely the league’s biggest star in LeBron in the East has helped to counter that from a ratings perspective. With him gone west, the eastern matchups look a lot worse, perhaps especially when you consider that the team with the NBA’s top record (the 14-4 Toronto Raptors) doesn’t have a local Nielsen market to add to the ratings. (They are getting more U.S. national dates than they have been, though, rising from five ESPN and TNT broadcasts last season to 15 this year, so maybe they won’t complain as much.)

Add in that the second- and third-place teams in the standings right now, the Milwaukee Bucks and the Indiana Pacers, play in the U.S.’ 36th- and 28th-largest media markets respectively, and you have a recipe for some declines.  Also, the first- and third-largest media markets, New York and Chicago (Los Angeles is second), have teams placed ninth (Nets), 13th (Knicks) and 12th (Bulls), but that isn’t exactly a big change from last year. But LeBron’s move west certainly is, and that’s leaving the networks with less desirable matchups to show in the early slots. They’re certainly not going to televise the LeBron-less Cavaliers (last in the NBA with a 2-13 record to date) as much as they did before. (LeBron being in the west also means that there’s more competition for the second half of national slots; ESPN or TNT now have to pick between LeBron and the Warriors, rather than showing them back-to-back.)

Of course, this is all early, and the ratings won’t necessarily be this way forever. Karp notes that both networks have some better matchups coming up. For example, ESPN gets LeBron in the early slot tonight:

Tonight … the King returns home to Cleveland at 8pm ET on ESPN. pic.twitter.com/zOvDs4lCzL

The networks also have the ability to flex in games as the season goes on. And there are certainly stars in the East still, from the Raptors’ Kawhi Leonard to the Bucks’ Giannis Antetokounmpo to the Celtics’ Kyrie Irving and the Sixers’ Joel Embiid and Ben Simmons. But it’s definitely notable to see how LeBron heading west has impacted the ratings, and how much of a role those early-slot declines have played in the overall ratings drops.