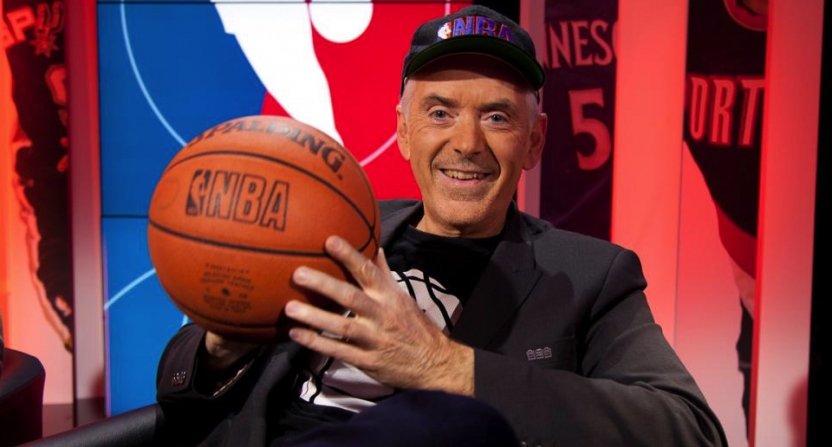 The 2017 NBA Playoffs have just begun, with most of the first-round series two games in. At this early stage of the postseason, many French pro basketball fans miss one of the signature voices of the sport in their country, one who inspired their love of the game with his quirky phrases and buoyant enthusiasm.

Perhaps even more interesting is that the beloved French broadcaster is American. George Eddy was the voice for a generation of French basketball fans, their gateway to a much more exciting, athletic version of the sport than previously seen in the country. Unable to catch on with a NBA team in the 1970s, Eddy won a spot on a French league team while visiting relatives in Paris. He played 14 seasons in France.

After his playing career ended, Eddy’s knowledge and enthusiasm for the NBA earned him as job as a commentator when network Canal Plus began a weekly broadcast of the league’s games. Fifteen years later, Eddy became best known for his jubilant call of Vince Carter vaulting over France’s Frédéric Weis for a dunk at the 2000 Olympics in Sydney.

A recent New York Times profile talked to several fans whose love of the sport was fueled by Eddy’s commentary, which was looser and more fun than the buttoned-up style of typical French broadcasters. Some of Eddy’s fans play in the NBA today (with approximately a dozen French players in the league), such as Utah Jazz forward Boris Diaw.

“His accent is his signature, and, even today, hearing it brings me back to all the nights I stayed up to watch games,” Diaw told the Times‘ Fabrice Robinet.

Eddy’s heavily accented French endeared him to viewers, many of whom stayed awake or woke up late at night to watch live NBA telecasts. (When Eddy began, Canal Plus broadcast the games on tape delay.) He didn’t necessarily have the best command of the language, leading to phrases that translated literally into “with frozen blood in the veins” or “he made him lose his shorts.” But fans loved the commentary and repeat it to this day.

As you might expect, some backlash also developed over time among broadcasters who felt Eddy emphasized style over substance and didn’t provide proper analysis for game telecasts. It seems comparable to how some fans and media feel about Dick Vitale here in the United States.

Eddy is no longer the main voice of the NBA in France. Canal Plus lost the French TV rights to the league to beIN SPORTS in 2012. The network still has broadcast rights to other French-speaking countries, notably in Africa, which still gives Eddy an outlet.

But technology has also made Eddy less popular than he used to be. As one admirer points out to the Times, fans can get live NBA telecasts on any device now. Eddy isn’t the only gateway to the league anymore. Those whose love of the NBA was inspired by the broadcaster, however, haven’t forgotten how crucial he was in developing their interest in the game.