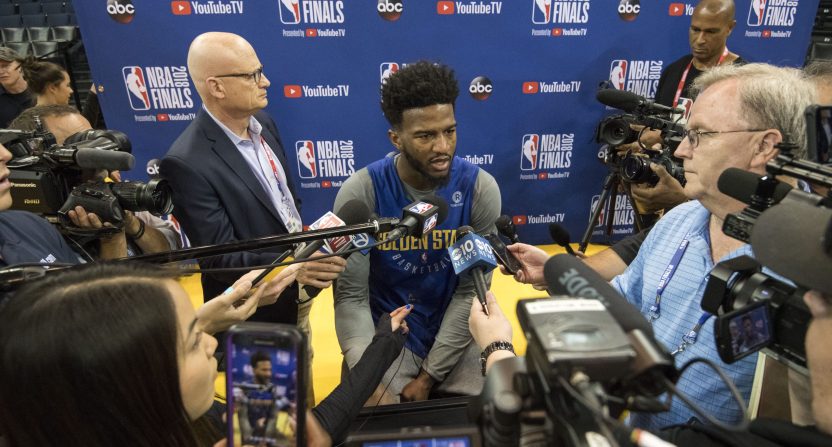 The COVID-19 pandemic brought with it sweeping changes in the way that sports leagues and media members interact with one another. At the time, the fear was that the leagues might use the pandemic as a way to reshape media access to players and coaches beyond the time in which these changes felt necessary. And that appears to be the case.

It was back in March 2020 when the NBA, MLB, MLS, and NHL issued a rare joint statement announcing media restrictions in their leagues over coronavirus concerns. As part of that announcement, all non-essential team personnel, which includes media members, were barred from locker rooms for the foreseeable future. At that moment, it made a lot of sense given what we knew and assumed about the virus and it was seen as an important, albeit temporary, step in trying to curb transmission.

Fast-forward to June 2021 and word got out that the NFL planned to keep locker rooms closed to media for training camp and preseason, a harbinger of the eventual announcement that locker rooms would remain closed to most media during the season, except for ” up to three team-employed PR/media people.” The notion that only media members employed by the team or league, and therefore have a vested interest in telling a specific story, seemed to defeat the premise, though that appeared to be the point to many.

NBA commissioner Adam Silver made the rounds this weekend as part of All-Star Weekend and he was asked about the league potentially lifting its restrictions on locker room access for media members. As some always assumed, it sounds like, despite the fact that the league is moving on from many COVID-19 restrictions and concerns, they’d love to continue keeping media members out of the locker room due to “health and safety concerns” as well as out of a sense that the entire set-up is outdated.

In regard to reporters returning to locker rooms, I recognize what I am about to say may not be so popular with this group,” said Silver. “It’s not going to be so easy. I think that depending on where we see this virus, potential variants, you know, I think creating a little bit of distance may make more sense for the foreseeable future.

“I also think it’s a bit of an anachronism to have reporters in the actual room where players are dressing. I mean, it used to be, for those that have been around a while, in the old days it was about female reporters, and we all got past that issue. It was ridiculous. It was discriminatory and made no sense. At least from my standpoint, I never hear about those issues anymore. I think it’s different now. I think there are different expectations of privacy, but at the same time, I recognize we have to create an environment where you all can do your jobs. I think it’s something, there is an association that you are all members of, that we should sit down and work together.

“To me, there are two issues: There’s just the health and safety issues for the players and for all of you as well. Then there’s also — I’m not sure if we were designing a system from scratch today, we would say come stand next to the players at their lockers as they’re dressing, and that’s the appropriate forum to interview them.

“I think we should all address this together because we very much appreciate the coverage. We’re dependent on it, and we want to accommodate you and facilitate it. So there may be better, different set of requirements where if players have an obligation to come to a podium to speak to all of you, there are different ways to arrange one-on-one interviews.

“My sense is Mike Bass, our head of communications, is probably not pleased with that answer. But as I think about it and think you have to look at everything anew, particularly as we work through a pandemic, I think it’s something we have to take a fresh look at.”

As you might imagine, plenty of NBA media members responded to Silver’s comments with some less-than-supportive thoughts. While some took aim at the lack of access and what that means, others felt that Silver’s justifications don’t hold any water.

It's insulting & it's lazy. The best stories are mined in the locker rooms. Otherwise, you wind up with a lot of gossip, rumors & distrust.

Adam Silver clearly hasn’t been in many locker rooms postgame…Also, Silver stopped testing and stopped caring about the virus. But now claiming concerns about variants and close contacts in locker rooms. Give me a break. https://t.co/ht0LkIS91h

The use of the word “anachronism” gives a lot away. At a time when athletes can (and do) make deeply personal choices about how private — or public — they wish to be, the idea that locker room access is out of time for that reason is exceptionally dubious. https://t.co/vOJeO3R6NL

Common misconception: It is not about locker rooms per se, it is about a room of some sort where interaction can occur that allows reporters to gather information of interest to fans – and not just a sterile, formal podium. https://t.co/smAuUBI6Tc

This is horrible, and most definitely not what we've been told since the pandemic began. Locker-room access is a crucial part of beat reporting. https://t.co/i9bcIZOwwk

By all means, what the NBA needs is less accountability. https://t.co/abwC8iR4lx

And a lot of times when teams are on long road trips, believe it or not they're actually HAPPY to see familiar faces walk into that locker room. https://t.co/T1Suq2uzM7

Opinion time (short thread):
Adam Silver mentioned multiple times, even when answering questions not about media access, the idea of the media being in locker rooms "watching players dress". I've been in a lot of locker rooms. Never once have I sees someone watching anyone dress.

To be fair, not everyone agreed that locker room access is required to cover NBA teams and provide accountability. Many folks on Twitter said that players deserved privacy and since they were already doing press conferences they don’t need to offer anything further.

Others suggested that putting some kind of limit or requirement on media members who enter the locker room could solve any perceived problems.

I’m pro player, but the NBA is doing it wrong trying to push media out of the locker room permanently. There are things media learn being around the team and the locker room in the heat of it. What NBA should do is be more selective on who gets credentialed for the locker room.

Expect this to continue to be a thorn in the side of media members and beat reporters trying to tell the stories of the players and teams they cover. As many have mentioned, it’s hard to tell good stories beyond the box score if you don’t have access to the players and coaches. And press conferences only offer so much, if anything at all.

As Silver said, the NBA counts on the media to tell their stories, humanize their players, and spread the word about their sport. He and the other league commissioners might think that it’s possible to get their cake and eat it too, but there’s a cost to all that lost access. We don’t quite know what it is yet, financial or otherwise, but it’ll show itself eventually.