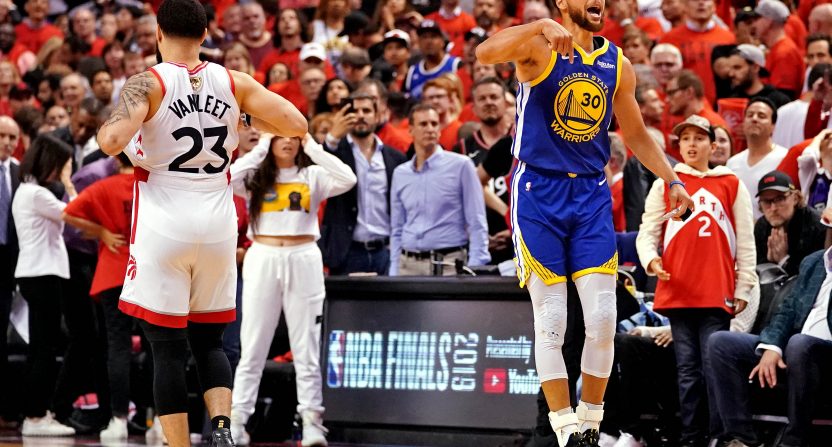 So far, the NBA Finals has been a ratings disappointment for ABC. Game 4, for example, was the lowest rated Finals game since 2009. This isn’t a reflection of the league’s popularity or even the popularity of the teams involved; the Game 4 Canadian broadcast beat the Super Bowl and was the top-rated NBA broadcast in Canadian history.

Last night’s Game 5, though, offered a few factors the series hadn’t yet seen. For one, it was an elimination game. The Raptors had a chance to close out Warriors in five games on Toronto’s home court. For another, Kevin Durant was expected to play, bringing the Warriors closer to full strength and adding one of the biggest stars in the game. Those factors led to a much bigger sense of anticipation, and the overnight ratings backed it up.

The game itself was wild, and it sadly featured Durant going down with an Achilles injury that will likely reshape the entire NBA offseason. Toronto, meanwhile, had a very good chance to put Golden State away, only to come up empty too many times at the end of the game. Steph Curry and Klay Thompson both hit massive threes down the stretch, and the entire finishing sequence was as entertaining as it was sloppy.

The outlook for the rest of the series remains confusing. The loss of Durant obviously removes a star from the proceedings, but the conversation about his injury and who exactly cleared him to play might, if anything, drive up interest in the remaining games. The Warriors are also now in a sort of underdog position, which is almost unthinkable given their season-long narrative. They also still have plenty of detractors, and the next two games are opportunities for that crowd to see them lose a championship.

Game 7 would certainly be entertaining for just about everyone, and the Game 5 numbers probably mean network executives want it most of all.