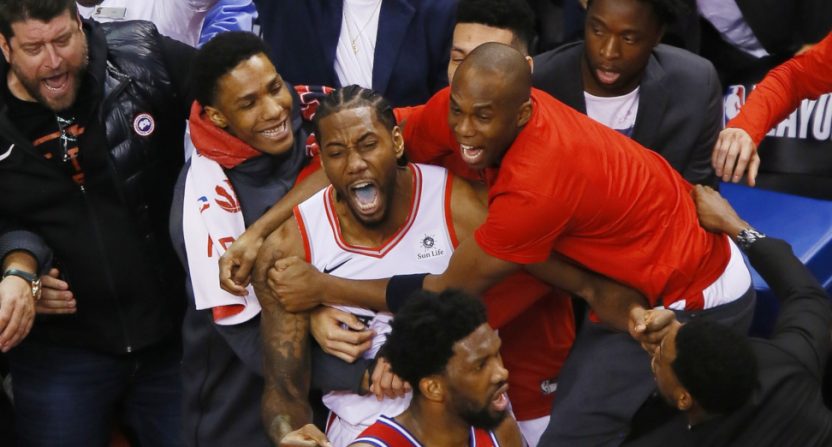 This year’s NBA conference finals have some fresh blood, but that’s not necessarily good news for the networks broadcasting them. The 2018 conference finals (Golden State Warriors-Houston Rockets and Boston Celtics-Cleveland Cavaliers) both went seven games and averaged 9.02 million viewers, up 40 percent over the previous season. But based on market size numbers alone, the matchups this year (Warriors-Portland Trail Blazers on ESPN/ABC and Milwaukee Bucks-Toronto Raptors on TNT) don’t look as impressive. Here’s a table showing that (market size data from Nielsen’s 2018-19 Local Television Market Universe estimates, which are U.S.-based and thus don’t count Toronto, as viewers there will be watching on TSN and Sportsnet rather than ESPN and TNT):

So, yeah, that’s a drop-off of 682,283 homes and 11 market ranking positions on average considering only the seven U.S. markets. And the actual story’s even worse when you consider Toronto, which is contributing zero local U.S. homes to the equation. If you run that average with Toronto included as a zero, the average TV homes fall to 1,101,165. Now, the Raptors may provide more of a local U.S. impact than that; some people in nearby Detroit (market #14, 1,777,240 TV homes) and Buffalo (market #52, 586,930 TV homes) with Toronto ties may watch because of them. But those markets also have plenty of fans of the Pistons, Knicks and Nets (as well as other teams), so they certainly can’t be fully added to Toronto’s impact.

Of course, it’s not all about the local numbers. The NBA playoffs draw a fair bit of national interest, especially around top players. And there are plenty of those involved in these conference finals, from Toronto’s Kawhi Leonard to Milwaukee’s Giannis Antetokounmpo to Portland’s Damian Lillard and the Warriors’ star-studded lineup.

But these finals don’t have LeBron James (previously cited as a huge figure in national NBA TV interest) for the first time since 2009-10, so even on the star level, they’re probably down a bit. And it’s notable that through last Wednesday, playoff ratings had declined for 44 of the 58 games that were comparable to last year (even if the numbers on ESPN/ABC alone are up three percent, helped by their Warriors broadcasts). And while the Raptors posted some okay U.S. ratings during their large national U.S. TV presence this year (after plenty of previous complaints about lack of national U.S. games), they also delivered some duds, including a November NBA on TNT matchup against the Warriors that was Golden State’s lowest-rated game on ESPN, ABC or TNT since November 2015.

The other factor that may well drop ratings year over year is series length. We don’t know how long either of this year’s series is going to go, but both the Warriors (-500) and Bucks (-300) are pretty substantial favorites, which could lead to shorter series if the games play out as the oddsmakers predict. And last year’s conference finals both going seven games played a big part in juicing those ratings. If these series both wind up being shorter, that could make for an even bigger year-over-year drop.

So it feels like a pretty good assumption that the U.S. ratings are going to be down, and the big question will be how much. TSN and Sportsnet should be real happy though, as the Canadian ratings will be way better with the Raptors involved. And that’s nice for Sportsnet in particular, considering that all the Canadian hockey teams exited in the first round this year. But what’s good news for them isn’t good news for TNT, also dealing with the small Milwaukee market, and while ESPN and ABC will be excited about the Warriors, they’re probably less thrilled about the Blazers. We’ll see how the ratings pan out, but a drop of some sort seems pretty likely.