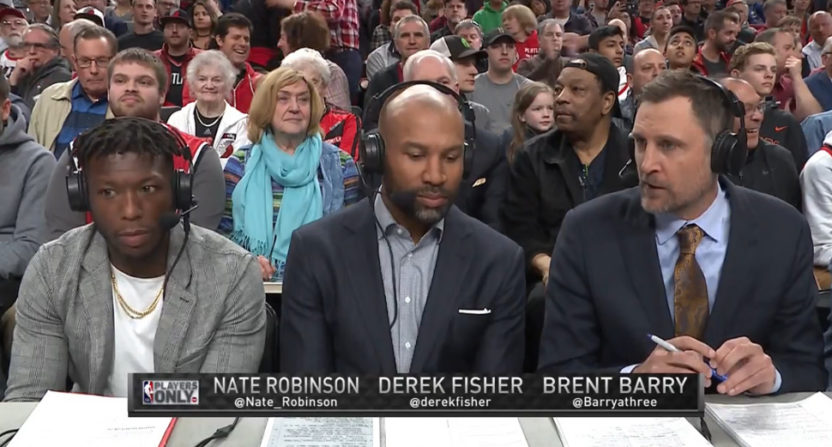 TNT’s Players Only sparked a lot of talk when it debuted last spring for its idea of having former NBA players filling all on-camera roles on a game broadcast. After it proved popular, it was expanded to NBA TV and stretched over the entire 2017-18 season. The concept occasionally goes a long way from what we’re used to seeing on a broadcast, though, and that’s perhaps especially true with ad reads, something Nate Robinson has been showing us the past few weeks.

Experienced non-player broadcasters like Ernie Johnson, Jim Nantz, Joe Buck and so on often make ad reads for even bizarre things you’d never expect them to be associated with feel quite smooth (this 21-year montage Buck doing World Series promo reads for a whole lot of short-lived Fox shows is a good case in point), but some players-turned-broadcasters seem a little more awkward reading ad copy. Robinson is proving a case in point there.

The spacing’s weird there, which makes it very clear how Robinson’s just reading this off whatever he’s been handed. “And pair it…your way at Burger King! Mix or match two of your favorite sandwiches… for just six bucks! You heard that, for just six bucks.” Boothmates Brent Barry and Derek Fisher give him some encouragement with “Yeah, Nate!” and “Get it!” and Robinson then says “Y’all see it out here, man, we getting it, we learning.”

And he’s not wrong; this is considerably better than an ad read he tried a couple of weeks ago:

There’s been lots of other criticism of Robinson on these broadcasts (mixed with some praise; some have said they appreciate his more-casual approach), but the discussion of the ad reads is perhaps the most notable. It’s been getting a lot of Twitter reaction, and much of that isn’t positive:

I mean, I like Nate Robinson commentating the Blazers/Rockets game, but TNT wrong for having him read them sponsor ads again! And D Fish ain’t helpin by hypin him up! ?

When it's time for Nate Robinson to repeat the the ads pic.twitter.com/lvFgJ2nEkg

??? a game within a game….Nate Robinson reading ads with the added bonus of a Blazers/Rockets game

Everyone: Get rid of Reggie!

NBA: Do you want more players on the call?

NBA: How about Nate Robinson reading an ad like it's Mt. Everest?

Live TV is hard, and ad reads can be particularly challenging for those unaccustomed to the medium; you have to say very specific things you probably wouldn’t naturally, and make it sound natural. Adapting to that can be difficult. And at least Robinson’s ad read style is generating some conversation.

But that’s not necessarily conversation that TNT or these sponsor brands want. We’ll see if Robinson is assigned ad reads on future broadcasts.