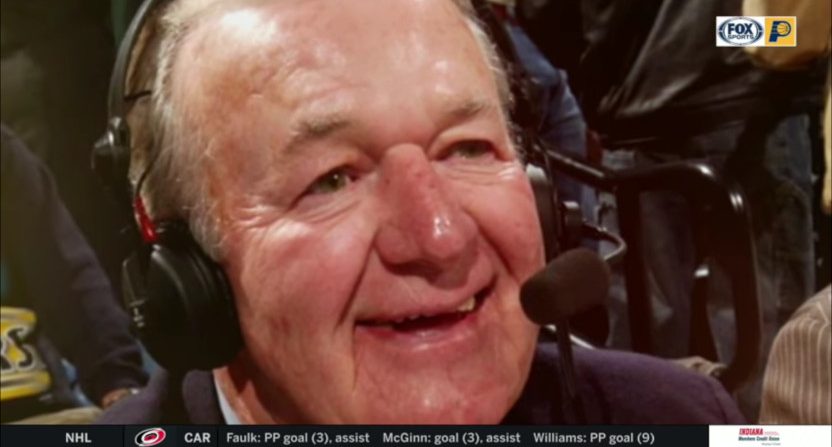 Bobby “Slick” Leonard passed away at 88 Tuesday, and much of the coverage focused on his remarkable career as a player (he led home-state Indiana to a NCAA title in 1953, hitting the game-winning free throw, then played seven years in the NBA) and coach. Leonard, who was inducted into the Naismith Memorial Basketball Hall of Fame in 2014, started as a player-coach with the Chicago Zephyrs, then switched to just a coaching role when the Zephyrs moved to Baltimore as the Bullets, coached there for five years. He later became the head coach of the Indiana Pacers and won three ABA titles with them, led them through financial turmoil around the NBA-ABA merger (including organizing a last-second telethon in 1977), and also served as general manager for some of that time.

But Leonard’s also known to many from his career as a Pacers’ color commentator, which saw him start on TV in 1985, move to radio shortly afterwards, and continue there until his death (albeit only calling home games in recent years following some health issues, including a 2011 heart attack and three 2018 falls). Along the way, he became known for his “Boom, baby!” three-point catchphrase, as well as his general energy, enthusiasm, and insight.

The 2020-21 campaign was Leonard’s 35th season as a Pacers’ broadcaster, and the tribute to him from long-time play-by-play partner Mark Boyle (who had called games with Leonard for decades) during the intro to Tuesday night’s game against the Los Angeles Clippers (which Boyle wound up calling solo) was quite touching:

“There will be plenty of time to talk about tonight’s matchup over the course of the next two and a half hours, but for now, I’d appreciate it if you’d let me share a minute with of some personal thoughts. As most of you know, William Robert Leonard, known to one and all as ‘Slick,’ passed away earlier today at the age of 88. He passed away in his sleep after battling a variety of health issues over the last number of years. And because of his health history and his age, it’s not necessarily surprising that he’s passed. However, that it’s not surprising doesn’t make it any less heartbreaking.”

“This was a man that reached us on a number of levels. He was a high school basketball star, an all-American at IU, he played and coached in the NBA, and then was the coach when the Pacers won their three ABA championships. After that, he and his wife Nancy, who were together for over 60 years, helped save the franchise through some dire times prior to the Simons owning the team. Later on, Slick became a beloved broadcaster for us on radio and television.”

“I could sit here and talk to you for hours about his accomplishments, and they are considerable, but that’s not why I’ve asked you to indulge me with this personal time at the start of tonight’s broadcast. When Slick and I became permanent partners in 1994, I was excited, but I was also a little apprehensive. I was young, I was full of myself, and I actually thought, and I’m embarrassed to admit this now, I actually thought at the time, ‘I wonder if this guy’s going to cramp my style.'”

“27 years later, he’s the best thing that ever happened to me professionally, and that’s not the half of it. This is a man that made all of us feel like a family member, made all of us feel like he was interested and invested in what we were thinking and doing and saying. I could sit here, like I said, and talk to you for hours about his accomplishments, and they are considerable, and they are impressive. But that’s not why I love Bobby ‘Slick’ Leonard, or why I admired him. I can put that into a few words. I love Slick Leonard because he was always the man I wanted to be and never could. Thank you for listening.”

That’s a wonderful tribute from Boyle, who also called Leonard “Mr. Pacer” and said  “The fans love him, I love him, and he’s done everything there is to do.” And at The Athletic, Bob Kravitz also had some good thoughts on what worked about the Boyle-Leonard partnership, with some insights from Boyle:

Mark and Slick were the perfect broadcast partnership. Boyle is deeply thoughtful and articulate beyond compare, his facility with the language unmatched. He is a loner, an iconoclast, someone who readily describes himself as “not much of a people person.” Slick, on the other hand, was everybody’s best friend, possessing the rare gift of being able to make everybody he met feel like a long-lost family member. Boyle was the brains of the operation, while Slick was its excitable heart and soul.

“This is going to sound kind of weird because it’s ambiguous and unquantifiable, but he taught me about people,” Boyle said. “And I still don’t totally get it and I’ll never be him, but the way he interacted with people was just magnificent. I know for a fact there are people Slick doesn’t like, and they think he loves them. Because he gives off that vibe. We were up in our broadcast booth last year when the Lakers came in and who shows up to see Slick but (former Pacers and current Lakers coach) Frank Vogel. He came all the way up the stands, through the crowd, just to say hello to Slick. He just had that gift to connect with people.

“To the degree our broadcast worked, it was because we were so different. I want the Pacers to win, but I’m more objective. I see both sides. And Slick is passionate. He’s not afraid to criticize, but it comes from the heart. When he goes too far out of bounds, I can rope him back in. And sometimes, I’d get caught up in his enthusiasm. We were so different, but we just complemented one another.”

But Boyle was far from the only one paying tribute to Leonard’s broadcasting ability. His TV colleagues Chris Denari and Jeremiah Johnson also had some thoughts:

No better person to represent IU, @Pacers, our city, our state than Slick Leonard. An icon. Responsible w/ Nancy for saving the franchise. Very fortunate to meet him 40+ years ago; he and my dad were classmates at IU. My thoughts and prayers are w/ Nancy and the Leonard family. pic.twitter.com/FJjLw8IfwD

Every time I heard Slick Leonard talk, I felt the emotions of basketball. His voice was like shoes squeaking on a gym floor, the sound of the ball swishing through the net, the smell of popcorn in the gym. Slick Leonard loved this state & our great game, and EVERYONE loved Slick.

And TNT broadcaster Reggie Miller, who had Leonard calling many of his shots during his 1987-2005 NBA career (all with the Pacers), tweeted about an Athletic tribute to Leonard from Zak Keefer and said he’ll always miss talking with Leonard:

This is everything you need to know about Bobby ‘Slick’ Leonard.. Will forever miss our bus/planes conversations.. #BOOMBABY https://t.co/ojv9vERyqY

Miller has even named his production company “Boom Baby Productions.” So that phrase is going to live on. Here’s a 2019 tribute video to Leonard from Pacers’ TV broadcaster Fox Sports Indiana (now Bally Sports Indiana):

Leonard certainly had a long and remarkable career, and impacted a lot of people as a player, as a coach, and as a broadcaster. Our thoughts go out to his family and friends.