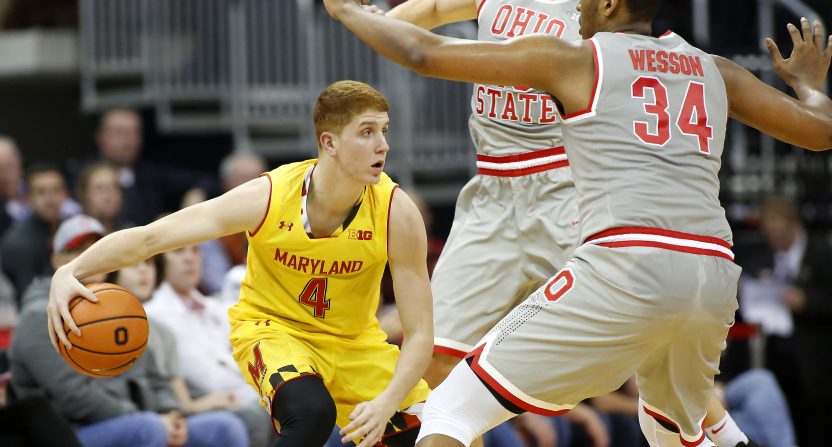 When the Milwaukee Bucks went on the clock with the No. 17 overall pick in Thursday night’s NBA Draft, the Atlanta Hawks were nervous. The Hawks had two players circled on their board for the No. 19 pick, but with a pair of teams selecting ahead of them, there was no guarantee one of their targets would drop.

So Atlanta began speaking to Milwaukee about a potential trade, one that would have allowed the Hawks to move up for one of their preferred players in exchange for another pick.

Then Yahoo Sports’ Shams Charania tweeted that the Bucks intended to select Donte DiVincenzo (Adrian Wojnarowski either didn’t have this one or held back from reporting it), and suddenly the Hawks had no reason to make the trade. At least one of their targets would be available at No. 19.

Sources: The Milwaukee Bucks have selected Donte DiVincenzo with the No. 17 pick in the NBA draft.

The Hawks wound up happily taking Maryland guard Kevin Huerter (whom they had “zeroed in on“). Via ESPN, here’s how general manager Travis Schlenk explained the situation to 95.7 The Game in San Francisco:

“Last night, for instance, we had the 19th pick, and we’re coming down and we’re actually talking to Milwaukee on the 17th pick, talking about trading up to get a guy we like,” Schlenk said. “There’s were a couple of guys we felt really good about on the 19th pick, obviously Kevin [Huerter] was one of them, and it leaked who Milwaukee was going to take.

“So, all of a sudden, we were able to pull back out of that deal and keep the draft pick instead of packaging picks to move up because we knew that, two guys on the board we felt really good about and only one team in between us, so that was beneficial to us last night.”

With all the talk each year (and especially this one) about the consequences of pick-tipping for viewers, Schlenk’s story reveals that the practice can affect teams and players as well — in ways both positive and negative. Charania’s tweet saved Atlanta from having to pay to move up and prevented DiVincenzo from falling further than No. 17. It also potentially cost Milwaukee a potential extra pick and maybe cost Huerter (or the unnamed other Hawks target) the extra cash that would have come with going in DiVincenzo’s spot.

It’s unclear whether GMs changing course based on reported picks is common, but thanks to Charania and Schlenk, we know it has happened at least once.