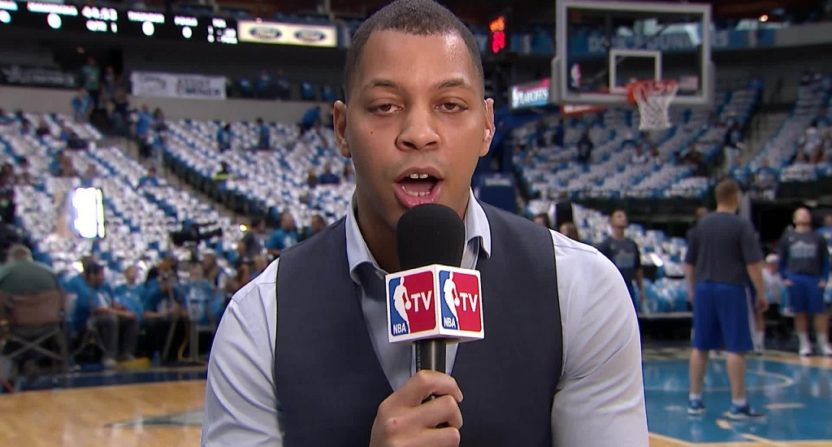 After serving as a freelancer for the Mavericks in 2009, Sneed became the Mavericks’ full-time beat reporter for the 2010-2011 season. During that season, Sneed was involved in a domestic dispute with his girlfriend that led to him pleading guilty to misdemeanor assault charges.

Midway through that season, Sneed was involved in a domestic dispute with a girlfriend. According to a Dallas police report, Sneed “sat on top of her and slapped her on the face and chest.” At one point he told the woman, “I’m going to f—— kick your ass. Today is gonna be the worst day of your life.” Sneed, according to the report, “fled before the reporting officer arrived.” The woman, according to the report, suffered a fractured right wrist and bruises on her arms and chest in the altercation.

Two months later, Sneed was arrested at the Mavericks facility and charged with assault, a class A misdemeanor. On June 28, 2012, he pleaded guilty to misdemeanor charges of family violence assault and interference with emergency request. He was sentenced to a $750 fine, supervised community service, and enrollment in an anger management program. Upon completion of his sentence the charges were dismissed. (Contacted by SI, Sneed declined comment.)

Despite all of this, Sneed kept his job as the Mavericks’ beat writer.

Then in 2014, Sneed was dating another Mavericks’ employee and allegedly hit her during a dispute. The woman reported the incident to the Mavericks’ head of HR, Buddy Pittman.

After his plea, Sneed dated a Mavericks colleague, a relationship the two made public in keeping with the team’s fraternization policies. Multiple sources tell SI that in 2014 the couple had a dispute and Sneed turned violent, hitting the woman.

Her face swollen, she went to work but within days reported the incident to her immediate supervisor and to Pittman. The woman recalls Pittman being professional and supportive; she also recalls Pittman informing her of Sneed’s prior arrest. In retrospect, she wonders how Sneed could have stayed employed. “He shouldn’t have a job there,” she says.

And still, Sneed kept his job as the Mavericks’ beat writer.

Within hours of being contacted by SI, in addition to firing Pittman and initially suspending Sneed (whom he later fired), Cuban said that the Mavs were establishing a hotline for counseling and support services for past and current team employees.

The Mavericks also released a statement on the SI report and allegations, and while referring to Sneed, said they “have also learned that an employee misled the organization about a prior domestic violence incident.”

In a separate matter, we have also learned that an employee misled the organization about a prior domestic violence incident. This employee was not candid about the situation and has been terminated.

That’s a hard explanation to buy when you consider that Sneed was arrested for domestic violence *at the Mavericks’ team facility*, before pleading guilty to the charges.

After the SI report was published, Sneed deleted all of his tweets, before just deleting his Twitter account altogether.

let’s check in on how earl k. sneed is dealing with the si report: pic.twitter.com/FaN1lRUInp

Sneed released a statement to The Dallas Morning News responding to the allegations.

In the statement, Sneed said that he “signed a contract stating that [he] would not have one-on-one contact or fraternize with female employees after the inaccurately described incident with [his] female co-worker, who was a live-in girlfriend.

Sneed added that he “abided by the details of that contract for four years, and received counseling during that period to avoid future instances.”

“While both instances described in the report are damning and language used is not accurate, the two relationships described in the report are not something I am proud to have been a part of. I underwent much counseling after both situations, under the direction of [Mavs vice president of human resources] Buddy Pittman, and I feel like I grew from that counseling. I also signed a contract stating that I would not have one-on-one contact or fraternize with female employees after the inaccurately described incident with my female co-worker, who was a live-in girlfriend. I abided by the details of that contract for four years, and received counseling during that period to avoid future instances.

I thank Buddy Pittman for helping me to grow during that time, and I thank Mark Cuban for his willingness to help facilitate that growth.”

Mark Cuban has some explaining to do about this “contract” Sneed claims to have signed.