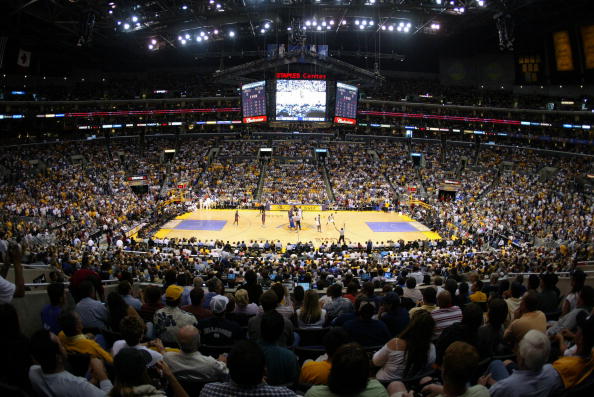 There’s a fascinating report at ESPN today about small market NBA teams struggling to make money, even in spite of the massive cash windfall that has come with new national television deals.

The teaser for the piece really says it all – “What happens when 30 NBA owners can’t share $24 billion?” That 24 billion figure comes from the newest television deal the league signed with ESPN and Turner which will pay them that amount over a 9 year period, roughly $2.67 billion per year.

Given that insanely high number going to each team, there might be some skepticism that somehow nine NBA teams lost money last year under the new TV deal, even with revenue sharing. Those teams as reported by ESPN.com feature some you would expect – small market franchises like the Grizzlies and Bucks. However, it also features very successful franchises on the court like the Cavs, Spurs, and Wizards.

The central reason for the difference as cited throughout the ESPN article is what happens with local television revenue. Specifically, the gap in rights deals signed by the likes of the Lakers and Grizzlies specifically creates a canyon that not even the most robust revenue sharing plan can make up.

The range of the revenue spectrum is illustrated by the two teams at the opposite ends: the Lakers and Grizzlies. And it’s stunning.

In the wake of Kobe Bryant’s retirement, the Lakers were devoid of a star player attraction last season for the first time in two decades. To retain their protected draft pick, they tanked the second half of the season, their fourth straight with 27 or fewer wins.

But it was a wonderful season financially. The Lakers finished with a gargantuan $115 million profit as measured by net income even after writing a revenue-sharing check for almost $49 million, according to league accounting. That was the highest net income in the league by nearly $25 million. The biggest factor was the $149 million they took in from massive local media rights deals, primarily with Time Warner.

Four years ago, ESPN The Magazine named the Grizzlies the best franchise in the major sports in its study of 122 franchises, and the team remains highly rated in the annual report. They have molded a strong connection with their fan base behind the “Grit and Grind” marketing campaign and playing style. The Grizzlies have made the playoffs seven straight years and counting.

But it was a tough season financially. After boosting their payroll, the Grizzlies lost nearly $40 million, earning a league-low $9.4 million in local media rights. Their losses were offset by $32 million in revenue sharing, the most in the league. The Grizzlies start a new local TV deal this season that should boost revenue, but as the smallest market in the league by Nielsen rankings, they may continue to have challenges relative to their larger peers.

“National revenues drive up the cap, but local revenues are needed to keep up with player salaries,” one owner explained to ESPN. “If a team can’t generate enough local revenues, they lose money.”

That’s right. The difference in revenue, just from local TV rights, between the Lakers and Grizzlies comes in at $140 million dollars. One. Hundred. Forty. Million.

Another astounding statistic is that the Knicks’ television deal accounted for more money than the six teams at the bottom of the list combined.

The biggest local TV deals also raise the cap level for everyone. The Lakers and Knicks both made more than $100 million from local media deals last season. Only four teams even came within $100 million of the Lakers’ local media revenue. The Knicks alone made $10 million more from TV than the six lowest-earning teams combined.

Maybe this doesn’t come as a shock to you. Huge franchises in huge markets are going to draw huge dollars from their local television deals. On the other hand, teams in small markets are going to have to scratch and claw for every penny in local revenue. While that generally theory isn’t all that surprising, just how wide the gulf is between those franchises at either end of the spectrum is.

The NBA and even these small-market franchises aren’t in serious trouble yet with franchise valuations skyrocketing and existing plans on the table to help even out the income from team to team. And yet, it’s something the league is going to have to consider monitoring, whether it’s increasing the revenue sharing or something else, in order to level the playing field a little bit more. When a team like the Lakers or Knicks can tank and finish out of the playoffs and still make millions upon millions more than successful small market teams, there’s still some kinks in the system that need worked out.