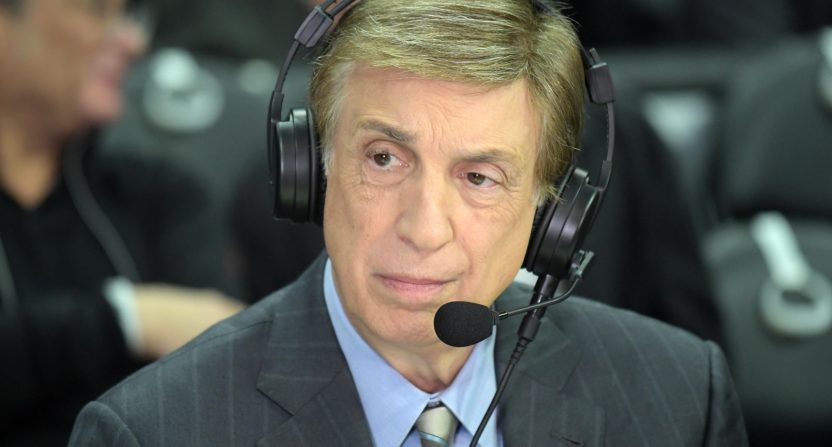 Marv Albert has not been calling the NBA since the beginning of time, it only just seems that way. But as the 77-year old Albert is in the midst of a contract that will take him to the 2020-21 season, one wonders how long if he will continue calling games.

Since the 2002-03 season, Albert has been Turner Sports’ lead announcer on the NBA, but  the New York Post speculates that this may be his last season as the top banana on the package. Citing sources, the Post says Turner is looking to replace Albert with Brian Anderson, the regular play by play broadcaster Milwaukee Brewers on Fox Sports Wisconsin and Turner’s top MLB Postseason voice (and an NCAA Tournament staple in recent years).

“If Albert were no longer Turner’s No. 1 play-by-player, he still would be able to broadcast games in the final two years of his contract, which runs through the 2020-21 season, if he so chose. It is unclear if he would want a Vin Scully-like retirement tour. In fact, Albert has shown no indication that he wants to stop working.”

Albert was originally the Voice of the New York Knicks, then was the lead announcer on the NBA on NBC (except from 1998-2000), where he rode the wave on the NBA’s surge of popularity thanks to Michael Jordan and the Chicago Bulls.

After NBC lost the rights to the NBA, Albert joined TNT for the 2002-03 season. Since joining Turner, Albert has called the NBA All-Star Game while also being one of the lead announcers for the NBA Playoffs, usually ending his season by calling one of the Conference Finals.

During this decade, Albert added the NFL on CBS and the NCAA Tournament to his schedule, but he eventually cut back to focus solely on the NBA. And while he has reduced the amount of games he’s called, Albert was quick to point out to the Post that he has no intention of slowing down:

“My contract is for another three years,” Albert texted The Post. “I feel great. The people at Turner are terrific to work with. I love doing the NBA and will continue to do so. I do appreciate your reaching out.”

For its part, Turner Sports tells the Post that “no decisions have been made at this time.” So if it were up to Albert, he would be calling games well into his 80s before calling it quits.