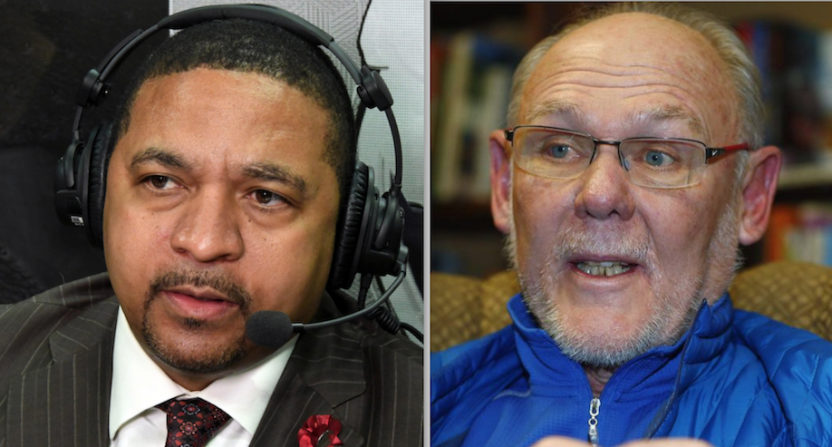 The 2019-20 Portland Trail Blazers aren’t known for their defense so much as explosive scoring (and long-range shooting) from Damian Lillard, accompanied by C.J. McCollum, Jusuf Nurkic, and a rejuvenated Carmelo Anthony.

But for the Blazers to upset the Los Angeles Lakers in the 2020 NBA Playoffs, they’ll have to play just enough defense to win — as they did in Tuesday night’s Game 1 victory. That wasn’t the case in Thursday’s 111-88 Game 2 loss (though a lackluster offense was a much larger factor).

Part of the problem for Portland would appear to be that Anthony is being assigned to defend LeBron James. That looks like a terrible match-up for the Blazers. Yet Anthony has actually checked James respectably. Contrary to his previous reputation as a poor defender, he’s put more of an effort into that part of his game.

On Thursday’s ESPN telecast, analyst Mark Jackson noted that Anthony has always been a better defender than perceived. Jeff Van Gundy disagreed, saying Anthony has made a change in his game and worked to improve his defense. In response, Jackson said the blame for that lack of defensive effort wasn’t Anthony’s alone.

Here are Mark Jackson's comments that set off George Karl, he said there should be a "shared responsibility" for anyone who "allowed" Carmelo Anthony to play bad defense in the past https://t.co/0EjzuP8P5D pic.twitter.com/xo0gLcOjD5

“OK, I’ll tell you this: Then there’s a shared responsibility for whoever allowed that defense to be played,” said Jackson. “For some reason, he has bought in with this culture and he’s committed to it. This is energy and effort.”

Those remarks apparently raised the antenna of George Karl, who coached Anthony at the beginning of his NBA career for seven of his nearly eight seasons with the Denver Nuggets.

If the star forward was “allowed” to play bad defense, as Jackson put it, and developed bad tendencies, Karl was presumably responsible for that. Even though he wasn’t mentioned by name, the longtime NBA coach didn’t like such an implication and went back hard at Jackson.

“Remind me, how many All-Star teams did you coach, Mark?” Karl said. “How many [Defensive Players of the Year]? How many Finals appearances? How many of my teams became dynasties right after I left?”

Yet as the New York Post‘s Greg Joyce points out, Karl criticized Anthony’s defensive effort in his book, Furious George:

“‘He really lit my fuse with his low demand of himself on defense,’ Karl wrote. ‘He had no commitment to the hard, dirty work of stopping the other guy. My ideal — probably every coach’s ideal — is when your best player is also your leader. But since Carmelo only played hard on one side of the ball, he made it plain he couldn’t lead the Nuggets, even though he said he wanted to. Coaching him meant working around his defense and compensating for his attitude.'”

In Karl’s view, Van Gundy had it right. Anthony didn’t put in the work on defense.

The zinger about a team becoming a dynasty after Jackson left might sting the most. The greatest indictment of Jackson’s NBA coaching career (lasting three seasons) is that the Golden State Warriors won three NBA championships and appeared in five consecutive NBA Finals after he was dismissed.

Jackson responded on Twitter, citing his head-to-head record versus Karl.

Wasn’t even thinking of u!
Btw I never lost to u in the playoffs as a Player or as a Coach! God Bless u and urs! https://t.co/MdIPN7Z26H

As a player, Jackson’s Indiana Pacers beat Karl’s Milwaukee Bucks in the 1999 and 2000 NBA Playoffs. And he coached the Warriors to a playoff series victory over the Karl-coached Nuggets in 2013.

Anthony didn’t become a better defender with the New York Knicks, Oklahoma City Thunder, or Houston Rockets. And his improved defense with Portland likely comes from him now being a role player. Anthony’s NBA career appeared to be over, so maybe he realized that his game had to change if he was going to fit on any NBA club. So his attitude had to change.

So is Karl being a bit sensitive? Maybe. But it made for an entertaining Twitter spat for one evening.