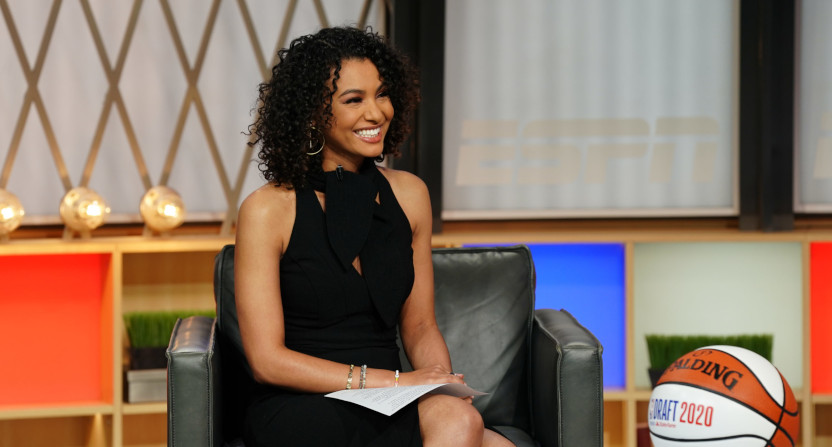 The NBA Finals begin Tuesday night, and normally, ESPN would have put out a release announcing their coverage plans (including for the ABC broadcast) days in advance. They did that on May 26 for a May 30 start in 2019, and on September 28 for a September 30 start in 2020. This year, the release came the afternoon of the event (at 12:12 p.m. Eastern, with the game beginning at 9 p.m. Eastern). It seems quite possible some of that delay may be around Sunday’s NYT reporting on Rachel Nichols’ 2020 comments on Maria Taylor and the behind-the-scenes tensions that’s led to, which has sparked plenty of further discussion (and an on-air apology from Nichols Monday).

As for the release itself, it has Taylor hosting the NBA Countdown pre-game and post-game show for the second straight year. But it has a notable change from the 2020 lineup, with Malika Andrews (seen above) working as the sideline reporter alongside play-by-play voice Mike Breen and analysts Jeff Van Gundy and Mark Jackson. Last year, that role was filled by Nichols following Doris Burke’s move to analyst on the ESPN Radio broadcast (which she’s continuing). Nichols is still involved in ESPN/ABC coverage for this year’s Finals, but only with hosting The Jump on site. Here’s more from the release on Taylor, Andrews, and Nichols:

…Mike Breen, who was honored as a Curt Gowdy Media Award recipient by the Naismith Basketball Hall of Fame this year, returns to call his unprecedented 16th NBA Finals as a play-by-play commentator. He will be joined by analysts Jeff Van Gundy and Mark Jackson. The event marks Van Gundy’s 15th NBA Finals – the most for a television game analyst – and Mark Jackson’s 13th NBA Finals – the most for a Black game analyst on any major sports championship event.

Malika Andrews will join the team to provide sideline reports throughout the series.

…The Jump, ESPN’s weekday NBA show, will hit the road for on-site telecasts Mondays through Fridays during the NBA Finals. Rachel Nichols will host The Jump with a cast of top analysts and reporters, including Richard Jefferson and Kendrick Perkins. Jefferson, a Phoenix native, will provide viewers with a tour of his hometown and discuss what a championship would mean for the city. Other analysts, including Vince Carter and guest analyst Chris Bosh, will join The Jump virtually during the NBA Finals.

Update: And here’s an ESPN statement on the change, via Andrew Marchand of The New York Post:

ESPN said, “We believe this is best decision for all concerned in order to keep the focus on the NBA Finals. Rachel will continue to host The Jump.”

For ESPN’s Western Conference Finals broadcasts this year, Nichols had worked as the sideline reporter alongside Breen, Van Gundy, and Jackson, a role she also held with that team on most of their regular-season broadcasts this year (including Christmas Day). Meanwhile, Andrews had reported for SportsCenter and other ESPN platforms from the Eastern Conference Finals, which aired on TNT. Andrews started working as a sideline reporter for ESPN in the bubble last season, and continued that role on telecasts this season (which included some feature spots contributing to Countdown, as discussed in that NYT piece), but not usually with the Breen/Van Gundy/Jackson ABC team. So this is a notable change, and it will lead to the Finals broadcast having a new sideline reporter.