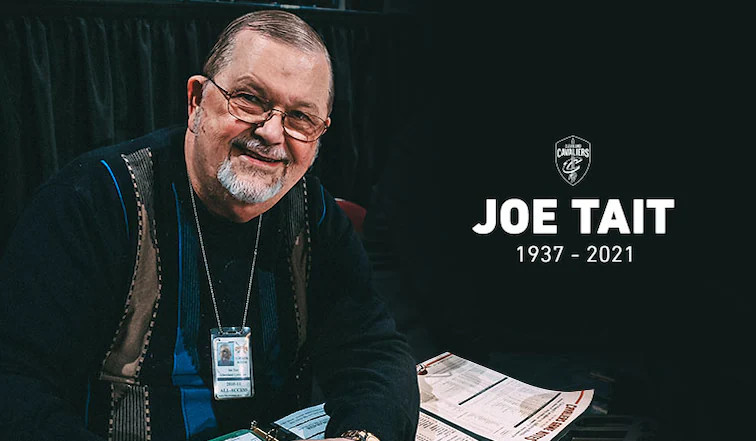 Joe Tait, a longtime Cleveland sports broadcaster and voice of the Cavaliers for more than four decades, died Wednesday. He was 83.

“A friend and mentor to many over the years, Joe Tait wasn’t just a member of the Cavaliers family; he was a part of the Cavs story like no one else and his voice and unique, candid perspective reverberates throughout the team’s history,” the Cavs said in a statement. “He will be dearly missed.”

Tait was with the NBA team from its inception in 1970 until he retired in 2011, calling over 3,000 games. In his final season, the Cavs honored Tait with a commemorative banner that hangs alongside some of the team’s retired jersey numbers in the rafters of Rocket Mortgage FieldHouse.

Los Angeles Lakers’ forward LeBron James, who played for the Cavaliers from 2003-10 and 2014-18, tweeted a tribute to Tait Wednesday:

And many others chimed in with tributes:

“Price into the forecourt, on the right wing. Price over to Ehlo, hands the ball to Nance, wham with the right hand!”

The sounds of my youth. RIP, Joe Tait. A Cleveland treasure.

Never forget sitting in the car with my Dad in a snowy Acme parking lot listening to the Cavs play the Jazz on a late December afternoon- Craig Ehlo hit the game winning 3 & Joe Tait belted out “Yes Virginia there is a Santa Claus… and he comes from Lubbock, Texas.” #RIPJoeTait pic.twitter.com/jvjqu2g6Jj

Yes Virginia, there is a Santa Claus and he was the voice of the Cleveland Cavaliers…Joe Tait! The best radio broadcaster and most loyal to the Cavaliers. The man they call Eggs, will have a Omelet tonight in your honor. You done good Joe, enjoy your eternal rest.

The Cleveland Cavaliers mourn the passing of one of our beloved founding fathers and the original, long-time voice of the franchise – Joe Tait.

RIP to Joe Tait. A man that I emulated in my backyard growing up when shooting hoops, to a man who was so huge in my development in this business. Always honest n sincere to me, and REAL! My heart hurts today as if I lost a family member.

My column on the passing of Joe Tait:https://t.co/1GNyGp447t

So sad to hear the passing of another Cleveland legend Joe Tait. My dad (left) did radio for 30 years and did many shows with Joe throughout the years. He just shared this classic pic. Will never forget listening Joe call Cavs games growing up. pic.twitter.com/D4AwqjvFwn

Terribly saddened by the passing of the legendary Joe Tait. No one in my 40 plus years as a broadcaster have I respected more, or held in higher regard than Joe. Spent 14 years together calling @cavs. The wonderful memories we shared will live forever. Much love, Joe. Miss you

RIP Joe Tait, Cleveland legend and kind, funny soul. You will be missed.

#RIP Joe Tait. One of the greatest. ? for so many great memories. pic.twitter.com/TK1HNt1BTn

Tait will be missed by many, as those tributes show. Our thoughts go out to his family and friends.

[The Associated Press; photo via NBA.com/cavaliers]