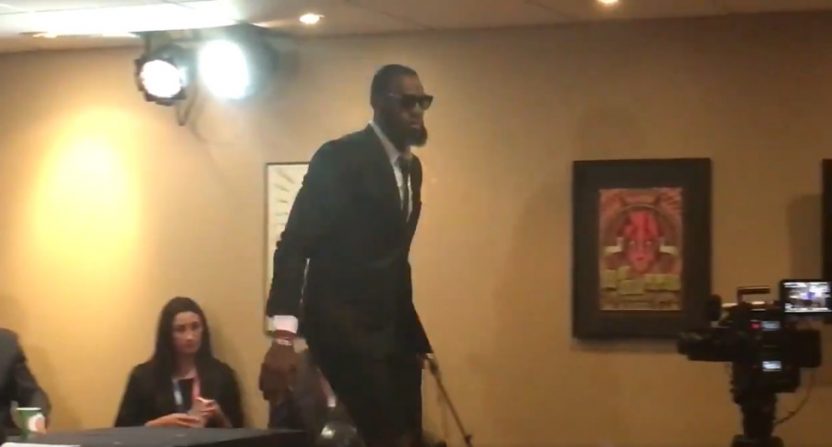 J.R. Smith’s epic gaffe at the end of regulation, where he grabbed an offensive rebound with the game tied, then appeared to try to dribble out the clock instead of going for the win, played a major role in the Cleveland Cavaliers’ 122-114 loss to the Golden State Warriors in Game 1 of the NBA Finals Monday night. It spawned a lot of memes, many based on the photo of teammate LeBron James seemingly yelling at Smith afterwards, and also led to some tense press conference moments in the wake of the final whistle. One of the most tense came when ESPN’s Mark Schwarz, a reporter who’s been with the network since 1990 and who’s often been featured on Outside The Lines and SportsCenter, kept pressing James about if Smith knew the score was tied (as Smith claimed later) or not. James wouldn’t speak to Smith’s state of mind, Schwarz kept asking, and James eventually walked out of the press conference:

LeBron walked out of his press conference when he kept getting asked about JR Smithpic.twitter.com/Dhhx9L4dzN

“What do you mean, what’s my version?” James asks. Schwarz says “Well, did he think that the game was tied, or did he think that you guys had it salted away?” James says “How would I know that?” Schwarz says “Well, did you discuss it at all with him at the end of the play?” James says “No, they asked me if I talked to J.R. at all about it, and I said no already. I knew it was a tie game, we were down one, George Hill went up and got one, we got the offensive rebound, and I thought we were all aware of what was going on. That’s my view. I don’t know what J.R. was thinking, I don’t know the question you’re trying to ask.” Schwarz then says “I was just trying to see if you knew exactly what his state of mind was, did he think you had it won, or was he trying to make a play. Not sure?” James then says “What do you mean, not sure? No, I don’t know his state of mind.” Schwarz says “Do you know if he knew the score?” and James walks away.

Here’s video from another angle of the fuller exchange and of James’ exit, which includes him saying “be better tomorrow” as he walks out. It appears that’s directed at Schwarz, but it could be the media generally:

LeBron walks off the podium after an exchange with a reporter about JR Smith, tells him to “be better tomorrow” pic.twitter.com/Fq8wezSuFT

There are people who are going to see this as James disrespecting the media, but honestly, his actions here seem pretty understandable. This was a highly emotional loss, one where a spectacular 51-point, eight-rebound, eight-assist performance from James just wasn’t enough thanks to some controversial calls and some mistakes by his teammates. And while Schwarz can just keep asking the same question in slightly different ways over and over again if he wants, it’s maybe reasonable for James to be frustrated by that, especially as the question (about Smith’s mindset) is something he doesn’t necessarily know and can’t necessarily speak to. And Schwarz’s questions here really seem to be trying to get James to call out a teammate publicly, and it’s understandable why James wouldn’t want to do that.

And Schwarz was drilling down on this hard in a number of the different post-game press conferences, asking the same questions over and over again to different Cavs’ figures. While he can do that, it’s not necessarily wrong for James to stop taking that question after he gets it time and time again in slightly different formats. Schwarz is a credentialed media member who can ask what he wants, but it’s not wrong for subjects to be annoyed by particular questions, especially when they’re regularly repeated with only slight variations and when they’re something the player in question can’t necessarily speak to. And it’s not really James who leaves this exchange looking bad.