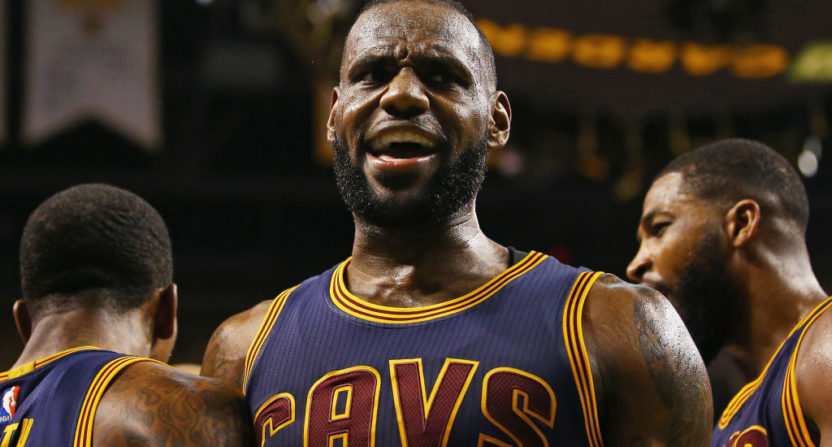 There’s yet another high-profile multi-part sports documentary coming to TV, and this one has LeBron James as an executive producer. Showtime announced Wednesday that James has teamed up with his business manager Maverick Carter and filmmaker Gotham Chopra (who we interviewed last year about his Religion of Sports docuseries on Audience, which involved Michael Strahan and Tom Brady) to create a three-part documentary about “the modern history of the NBA and the league’s impact on global popular culture,” which will premiere in 2018. Here are some quotes from the release:

“We are thrilled to be collaborating with LeBron, Maverick and Gotham on what will be a comprehensive look at one of the most influential sports institutions in the world,” said Stephen Espinoza, Executive Vice President and General Manager, SHOWTIME Sports.  “This series of films will join a growing list of must-see documentaries on SHOWTIME, films that reveal the myriad ways sports and culture intersect and influence each other.”

“We developed the idea for these films because of the incredible, generational impact some of the NBA’s most successful players have had on every aspect of American culture,” said Maverick Carter, CEO of SpringHill Entertainment. “Gotham is the perfect filmmaker to bring these stories to life, and SHOWTIME is the right platform to showcase how they were able to transcend the game and shape the culture in an unprecedented way.”

“Despite the fact that I am a Boston Celtics fan to the bone, collaborating with Maverick and LeBron was an inspired opportunity,” added Chopra (“Kobe Bryant’s Muse”, “Religion of Sports”). “Sports in general and specifically the NBA provide a great backdrop for storytelling. But these films offer us a chance to go beyond that; to weave a broader cultural narrative in our current social climate. With the support of David Nevins and the progressive SHOWTIME team, we have a chance to say something truly resonant. That’s the goal.”

Multi-part documentary series have worked well for ESPN, both with the Oscar-winning OJ: Made In America and the recent Lakers-Celtics 30 for 30, and Showtime has experience there as well with projects like All Access: Quest For The Stanley Cup. And while it’s a drama rather than a pure documentary, they’re also working on a limited series about Muhammad Ali and the Vietnam War. Showtime has pushed more into sports documentaries in general recently, too, giving us documentaries on Bob Knight’s 1976 Indiana team and the Baylor basketball scandal. And Chopra has plenty of relevant experience from Religion of Sports and Kobe Bryant’s Muse.

However, this is an exceptionally broad topic. ESPN gave us three parts and five hours counting commercials on just the Lakers and Celtics, and the largest part there was on the 1980s; how are you going to do “a comprehensive look” at the whole NBA in three parts? It will be really interesting to see what they choose to cover and not cover, and if they’re able to make a cohesive storyline out of the NBA’s modern history (what’s that defined as?) and its impact on popular culture.

It will also be worth watching just how involved James is here, and what his involvement means. He’s certainly an important part of the league’s modern history, but what will having him as an executive producer mean for discussions of that history? We’ll have to wait for 2018 to find out. But this will definitely be a project worth keeping an eye on.