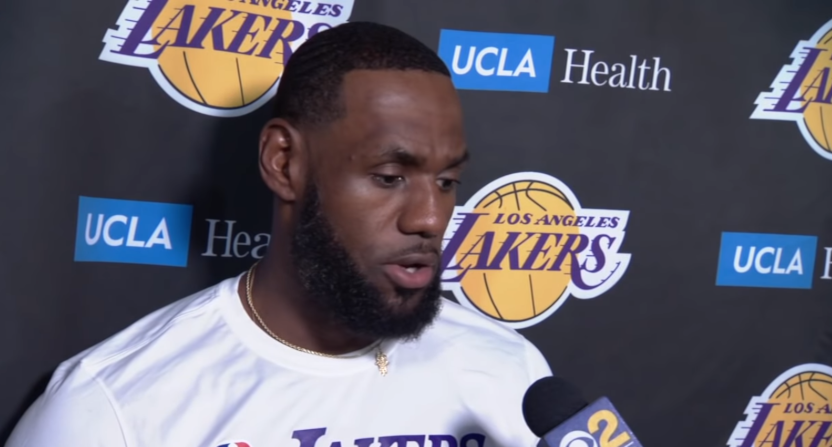 With the Los Angeles Lakers and Brooklyn Nets wrapping up their games in China this weekend, and with the NBA deciding to cancel those teams’ media availabilities for the rest of the trip (after the Chinese government cancelled them for the first game), it seemed like the sports media discussion of the NBA and China might die down a bit. That didn’t happen, though, and the reason why is LeBron James. On Monday night, James spoke to media for the first time since the trip (in Los Angeles, ahead of a Lakers’ preseason game against the Golden State Warriors), and he created a giant new controversy with his remarks on Houston Rockets’ general manager Daryl Morey, who sent the tweet in support of protests in Hong Kong that kicked off this whole dispute.

Here’s the clip of what James said:

A transcription, via ESPN’s Ohm Youngmisuk:

“I don’t want to get into a [verbal] feud with Daryl Morey, but I believe he wasn’t educated on the situation at hand, and he spoke,” James said before the Los Angeles Lakers played the Golden State Warriors in a preseason game at Staples Center. “And so many people could have been harmed not only financially, physically, emotionally, spiritually. So just be careful what we tweet and say and we do, even though, yes, we do have freedom of speech, but there can be a lot of negative that comes with that, too.”

When asked why he thinks Morey wasn’t properly informed about the unrest in Hong Kong before he tweeted support for protesters, James said it is “just my belief.”

“I believe he was either misinformed or not really educated on the situation, and if he was, then so be it,” James said. “I have no idea, but that is just my belief. Because when you say things or do things, if you are doing it and you know the people that can be affected by it and the families and individuals and everyone that can be affected by it, sometimes things can be changed as well. And also social media is not always the proper way to go about things as well, but that’s just my belief.”

Those are quite the comments from James, especially considering that he has been personally outspoken on many social issues, has been criticized for that with lines like Fox News host Laura Ingraham’s “Shut up and dribble,” and then turned that insult into the title of the Showtime documentary he was involved with about the NBA, culture, and politics. And the “wasn’t educated on the situation” brings up memories of what critics like Ingraham have said to try to minimize James’ own comments.

This led to some initial backlash, and to James offering further comments on Twitter that somehow tried to indicate he wasn’t criticizing the substance of Morey’s comment, but only the “consequences and ramifications” of it:

Let me clear up the confusion. I do not believe there was any consideration for the consequences and ramifications of the tweet. I’m not discussing the substance. Others can talk About that.

My team and this league just went through a difficult week. I think people need to understand what a tweet or statement can do to others. And I believe nobody stopped and considered what would happen. Could have waited a week to send it.

This isn’t James’ only action on this front. As per ESPN’s Dave McMenamin on camera Tuesday, James called for NBA commissioner Adam Silver to punish Morey in a meeting last week:

“LeBron James is one of the players who got up and spoke and said, ‘Hey, what are we doing here? Daryl Morey made these statements. You know damn well if a player made the same statements and caused such poor ramifications for the league, there would be some sort of league recourse. There would be repercussions the player has to pay. You know, potentially this tweet could cost the NBA hundreds of millions of dollars. That could come out of the players’ pockets.’ And so that’s the double standard that was being addressed in that meeting.”

Not surprisingly, this has led to a lot of criticism for James, including protesters in Hong Kong burning his jerseys:

Some NBA fans in Hong Kong are burning LeBron James jerseys, after he commented on the Houston Rockets GM's tweet that supported protesters.

James said people should be careful what they tweet because "a lot of negative" can come with free speech. pic.twitter.com/PXHd2mIpvF

James’ comments here have probably led to more backlash than anything else during this controversy, perhaps even more than ESPN showing a Chinese government-approved map. And they’ve led to James getting raked over the coals by many in the media as well.

One of the most vociferous condemnations came from Dan Wolken of USA Today, who penned a “LeBron James undermines values he’s espoused in most disgraceful moment of career” column:

Right on, LeBron. Millions in Hong Kong are fearful that their entire way of life is about to change, and thousands upon thousands of protesters are risking their lives to make a stand for their freedom and their future. Why would Morey think about them when your preseason vacation and your bank account is at stake? How selfish of him.

If only Morey had done what you did Monday, LeBron, and tacitly admit that the only thing that really matters is your ability to sell shoes and market “Space Jam 2” in a country of 1.4 billion, we could have had an intellectually honest discussion about doing business in China and the cost of free speech in a country where only propaganda is tolerated.

The problem, LeBron, is that you’ve helped construct a world in which NBA players have been incentivized to criticize our leaders and our government here at home. And there’s nothing wrong with that, by the way. It’s part of who we are, and there’s a large segment of people who agree with you when you call President Donald Trump “u bum” on Twitter and say that going to the White House as an NBA champion used to be a great honor “until you showed up” as you did on Sept. 23, 2017.

You couldn’t have waited a week to send that tweet, LeBron, because it’s what you believed. And whatever backlash or consequences were going to come from sending that tweet for either you or the NBA, you were willing to deal with it because you presumably believed that expressing your opinion on the matter contributed to a greater good.

But when you go that hard at our own elected officials, LeBron, it is difficult to reconcile that with the idea that China of all countries should be above reproach for anyone who works in the NBA.

Bill Plaschke of The Los Angeles Times also lit James up in a piece titled “For LeBron James, injustice anywhere is a threat to justice everywhere … except in China“:

…And, let’s be real, LeBron James is first and foremost a businessman. That’s not a bad thing. He’s a darn good businessman. He’s a future billionaire mogul who has a powerful social conscience that he often uses to make the world a better place. But at the end of the day, he’s all businessman. It was business, not basketball, that brought him to the Lakers. And it is business that led him to publicly question the education of a man who simply issued a seven-word tweet in support of the fight for human rights.

James also took apparent criticism from fellow NBA player Enes Kanter of the Celtics, who has faced plenty of actual backlash for his comments on Turkey’s government:

-Haven’t seen or talked to my family 5 years
-Jailed my dad
-My siblings can’t find jobs
-Revoked my passport
-International arrest warrant
-My family can’t leave the country
-Got Death Threats everyday
-Got attacked, harassed
-Tried to kidnap me in Indonesia

FREEDOM IS NOT FREE

Having just been in Hong Kong – on the streets & with the protestors – this kind of garbage is hard to take. LeBron, are YOU educated on “the situation”? Why don’t you go to Hong Kong? Why don’t you meet the people there risking their lives for their most basic liberties https://t.co/KvphH9RiAl

And further criticism came from ESPN’s Will Cain, who managed to misspell “emperor” along the way while also saying “he has no concept what he does not know” (missing an “of” there, Will).

Lebron has been surrounded by yes men and an adoring media since adolescence. He is a generational basketball player and an admirably charitable citizen. But he has no concept what he does not know. And no one will challenge him. The emporer (“king”) has no clothes.

However, on Get Up, Jay Williams not only expressed support for James, but indicated that he personally advised players to stay silent:

Yikes: @RealJayWilliams just said on @espn his advice to @NBA players before last week's games in China was to stay silent because, "There's nothing that Lebron James can say that will fundamentally change what a communism country is…doing right now." #StandWithHongKong pic.twitter.com/V6p3OU837v

Overall, James’ actions here seem likely to present further challenges to ESPN’s attempts to “avoid any political discussions about China and Hong Kong.” And they seem likely to further extend not just the ongoing NBA-China discussions about broadcasting games and shows there, but to bring the NBA-China situation back into the sports media spotlight. And that spotlight has returned to this in a way that makes James himself a heavy focus of criticism. His comments have managed to annoy other NBA figures, as well as critics from both ends of the political spectrum, and they’ve given fresh fuel to a controversy that had seemed to be quieting down.

Did Formula One mean to cut away from the scene of driver's kneeling in order to avoid further controversy?

ESPN's NBA reporter sent a message that said "Fuck you" to the Republican senator.

There's live Formula 1, IndyCar and NASCAR plus the MLS Is Back Tournament rolls on in Orlando and NWSL Challenge Cup is in its penultimate day

Charter is set for their fourth increase to the "Broadcast TV Fee" in the last two years.

Did Formula One mean to cut away from the scene of driver's kneeling in order to avoid further controversy?

ESPN's NBA reporter sent a message that said "Fuck you" to the Republican senator.

There's live Formula 1, IndyCar and NASCAR plus the MLS Is Back Tournament rolls on in Orlando and NWSL Challenge Cup is in its penultimate day

Charter is set for their fourth increase to the "Broadcast TV Fee" in the last two years.