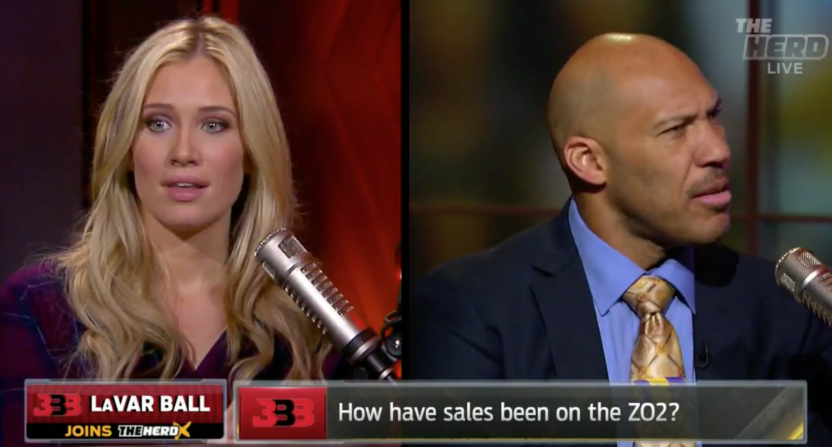 LaVar Ball appeared on Colin Cowherd’s show Wednesday. He revealed himself to be a rather small baller. Feeling his brand under logical attack, he dismissed Kristine Leahy for being a woman, refused to look her in the face and quasi-threatened her. It was dark. It was ugly. It lacked any of his bonhomie and self-awareness. One suspects (or hopes) that will be the last time Ball gets booked for ESPN or FS1.

Ball requires minimal exegesis. He is a vacuous blowhard. We know the type well. We elected one president. His antics, hardly the mark of a promotional genius have already (and will continue to) cost his talented son money. His media rise the past few months was lamentable, and we were all complicit. Me on the “content creation” side and you for consuming it.

If blowhards possess a modicum of charm, we love them, often more than those whose behavior warrants esteem. The biggest journalist/pundit in the sports media? It’s Stephen A. Smith. Maybe Skip Bayless. The most prominent former athlete in the sports media? Charles Barkley.

Calling such figures “polarizing” injects too much intellect. It’s not what they say or the debate that engenders. It’s an intrinsic fascination at the flouting of social norms. They do the things you won’t do. They say the things you won’t say. Their egos are too bulksome and unwieldy to tread the line of propriety for long. You can’t look away. You want to see what happens when they cross it.

LaVar Ball snowballing into a phenomenon should surprise no one. People were talking about him. ESPN and FS1 put him on TV. Those moments, with the aid of a myriad of websites, went viral. ESPN and FS1, thus, put him back on TV. At each step, people watched, clicked, and couldn’t get enough of it. Those media members most aggrieved LaVar Ball continued to be “news” were the aptest to discuss him.

This sort of thing happens every day. It’s both a media problem and a societal one. We’ve come to a consensus no one wants to pay for online media consumption. Outlets are forced to target their audience with algorithms to maximize traffic. Increased financial pressure squeezes out the remnants of a broader purpose or moral compass.

Even if you have a slight, subconscious desire for a little LaVar Ball in your life, metrics will pick up on that. News outlets will shove him in your face until you stop reacting, probably with blaring autoplay video ads.

We saw this with Trump. We saw this with the male romper. The idea of one, with a well-produced video, elicited a reaction. Media outlets caught on and covered it. It was just the idea. It’s not a trend. The actual product does not exist. It’s a Kickstarter that has now raised more than $220,000. There’s now a high probability the male romper will become a trend, at least until those first daring masters of topical irony attempt to use a public restroom in one.

Did media just willingly serve as de facto brand advertising? Did it matter, if people clicked? As many have said before, you get the media for which you pay.

LaVar Ball took his asininity a step too far. That was the only way to kill the cycle. We’ve been spared a “Dancing With The Stars” appearance. There will be no 2020 Democratic Primary run, which we can only three-quarters of the way joke about now. One can only hope the elder Ball disappears back to some netherworld where the only people his braggadocio plagues are those poor folks stuck with him in a pickup game.

Maybe, just maybe there’s still space for Lonzo to have an untrammeled career and to get a real sponsorship deal at some point.