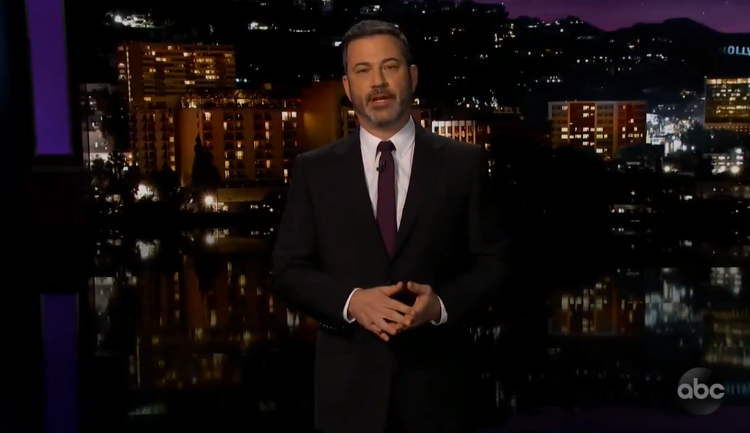 Kobe Bryant, his daughter Gianna, and seven other people died in a helicopter accident on Sunday in California. On Monday, late-night talk shows addressed the tragedy, with Jimmy Kimmel and Jimmy Fallon particularly getting very emotional.

Jimmy Kimmel Live! even used their full hour to serve as a tribute, with no studio audience. Kobe appeared on Kimmel’s show an incredible 15 times, so the two had a very close relationship. Kimmel began Monday’s program by explaining how it would not be a usual show:

“Tonight’s show is going to be different from our usual show. We don’t have a studio audience here tonight, because going forward with a comedy show didn’t feel right considering what happened yesterday. So I’d like to just speak to you directly.”

A few minutes later, Kimmel got choked up before explaining that they would share clips of Bryant’s many past appearances on the show over the hour.

Jimmy Kimmel Live! ended with a montage of Kobe highlights (featuring Foo Fighters’ “My Hero” as the music).

This was a really cool Kobe tribute to end tonight’s Kimmel show pic.twitter.com/GonXaNfJUP

On The Tonight Show Starring Jimmy Fallon, Fallon broke down in tears after sharing a story about the first time he met Bryant.

I will remember you 24/8. pic.twitter.com/9IdJTbFPN2

“Kobe was such a life force, so strong and creative and inspired, that in my head I thought that he was gonna live forever.”

On Conan, Conan O’Brien — with vocal agreement from sidekick Andy Richter — focused on how naturally funny and charming Kobe was as a talk-show guest, before sharing clips of his past appearances.

“Just listening to the coverage, so much is rightly being said about Kobe’s incredible gifts as an athlete and his prowess on the basketball court, but what I wanted to do was just take a moment here at the top of the show to highlight another aspect of Kobe’s talent- he was naturally very funny and charming. He really was. Terrific guest. You know, a superstar does not have to be a great guest- he just was. Whenever he was on our show, he was a joy to talk with, and he always had the audience in the palm of his hand. That’s the guy I’ve been thinking about the past 24 hours, and it’s that memory I would like to share with you tonight.”

James Corden remembered Bryant’s final appearance on The Late Late Show with James Corden, shortly after Bryant retired from the NBA, and how excited Bryant was to finally have free time to focus on being a father.

James shares his thoughts on the untimely passing of Kobe Bryant. pic.twitter.com/3VHEDu1lI0

We’ll end the post with this clip from Jimmy Kimmel Live! in 2018, when Kobe spoke about how Gianna would carry on his legacy.

Watching Kobe Bryant on ‘Jimmy Kimmel Live’ gushing about his daughter, Gianna, crushes me even more

Gotta get off Twitter for awhile … Going to play basketball with my daughters #RIPMAMBA pic.twitter.com/gA3PzTJsJy