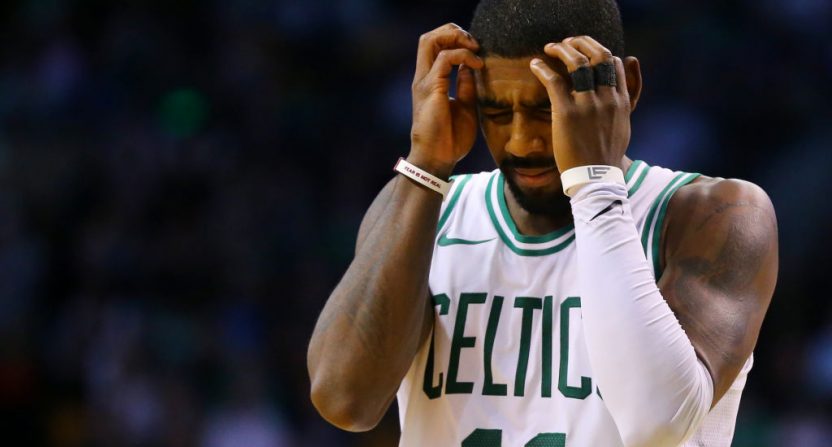 It’s been something of a tumultuous time for Boston Celtics’ star Kyrie Irving. While the Celts are fighting to host a playoff series and meet the high bar set for them before the season, Irving has been dealing with trade rumors, overwhelming expectations, teammate drama, and everything that comes with being an NBA superstar in 2019. And he hasn’t always dealt with it in the best way, lashing out at or talking down to media members. To say nothing of his purported conspiracy theories, the reactions they’ve sprung, and the effect they can have on the world outside of just basketball.

Irving recently spoke with Yahoo! Sports’ Chris Haynes about the way he’s been dealing with everything and how he’s trying to improve his methods.

“The way I’ve handled things, it hasn’t been perfect,” Irving told Yahoo Sports as he rested his feet in a bucket of ice at his locker stall. “I’ve made a lot of mistakes that I take full responsibility for. I apologize. I haven’t done it perfectly. I haven’t said the right things all the time. I don’t want to sit on a place like I’m on a pedestal from anybody. I’m a normal human being that makes mistakes. For me, I think because of how fixated I was on trying to prove other people wrong, I got into a lot of habits that were bad, like reading stuff and reacting emotionally. That’s just not who I am.”

It’s an introspective look into Irving and one that likely comes not a moment too soon. Just last week, Irving, who has his own sneakers, stars in commercials, and even played the lead role in a theatrically released movie, claimed he didn’t want to “be a celebrity” and that he never wanted to be. And this was the day after he was particularly snippy with media members just asking questions about the night’s game.

Irving touched on those comments in a way that was perhaps meant to imply he didn’t care about it but ended up coming off a little bit like he was bragging.

“My [Uncle Drew] character, I never took any acting classes. I didn’t put any extra work into it. It was just something I was able to do and it became this.”

“The off-the-court stuff, that’s more the aspirational side of things where it’s not really so much about the game. That goes back to having a presence, a message that you want to get across to fans, to different industries that you want to become a part of. I don’t really have complaints about that. It’s just when you come into this business now, it’s more entertainment now more than anything else. That’s what bothers me the most. It’s like a freaking reality show at every corner. Everything that someone says is the next [big controversy]. Like I said before … this breaks up locker rooms. Media breaks up locker rooms. It happens all the time, bro. Whether people want to admit or not, it really does.”

Still, Irving had some solid thoughts on the state of social media and how it affects professional athletes on this level.

“Look, I respect the ones that came before me, but they didn’t endure social media, the 24/7 news cycle. [NBA commissioner] Adam Silver was right; it really affects people in different ways. These are just different times. People are dealing with anxiety, depression and other disorders that affect their well-being. Some people can’t handle all of this, and we need to be mindful of that.

And if there’s a takeaway for fans, it’s probably that. And Irving, who has stopped personally posting to his Twitter and Instagram accounts, is trying to take those steps away from what he says he doesn’t want and attempt to save the next round of young NBA players from the drama he was a part of. Of course, social media is a tool, ultimately, and the real change has to come from the person if they want to change the message.