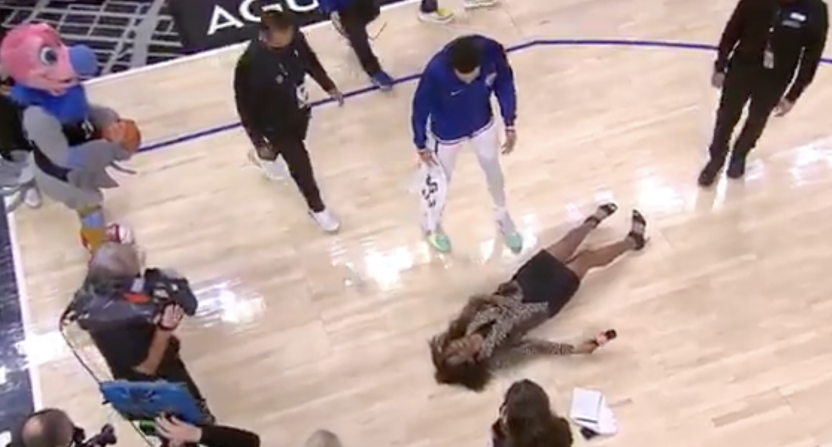 Where were the court moppers when we needed them most?

The Los Angeles Clippers defeated the Atlanta Hawks 106-93 on Sunday thanks in large part to the efforts of Amir Coffey, who led the way with 21 points, tying his career-high. After the game, Coffey was speaking with Clippers sideline reporter Kristina Pink when he was doused with water by two of his teammates.

Cool off the hot Coffey! ? pic.twitter.com/tv76ssXPaI

While all in good fun, that left a puddle of water directly at the feet of Coffey and Pink and, once the interview was completed, Pink took a scary-looking tumble to the court.

Kristina Pink hit the floor hard after interviewing Amir Coffey, unintended consequence of Coffey getting a bath from his teammates (h/t @AustinTobak) pic.twitter.com/b7rRvL1Zzh

Pink hit the floor so fast and so suddenly that it was heard through the microphone, which then caused the studio host to shift the broadcast away from the floor and towards the postgame show. However, we did see that Coffey and a few other people immediately rushed over to make sure Pink was okay. Thankfully, as she would later tweet, she was okay after taking a spill thanks to the water on the court.

For everyone asking, I’m ok ❤️ There was water on the court… Appreciate all the messages.

“For everyone asking, I’m ok,” Pink wrote. “There was water on the court… Appreciate all the messages.”

It was a bummer of a moment to end the week for the longtime sideline reporter, who filled in as Clippers TV game analyst on Saturday, drawing very positive reviews for her coverage, especially from head coach Ty Lue.

Hopefully, Pink is indeed okay from the fall and gets more opportunities to stand out on Clippers broadcasts without being in perilous situations.