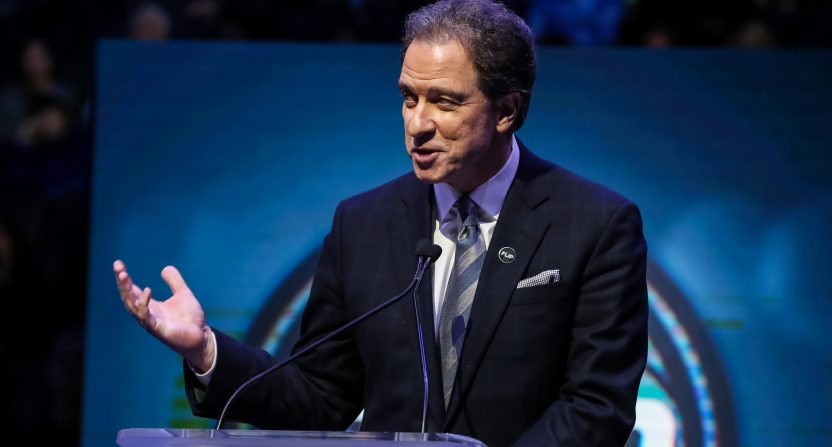 TNT will have a New York City-centric doubleheader Thursday night, with the New York Knicks hosting the Dallas Mavericks in Kristaps Porzingis’ return to Madison Square Garden followed by the Brooklyn Nets visiting the Denver Nuggets. Kevin Harlan, Reggie Miller and Allie LaForce will call the action from MSG, with Marv Albert, Chris Webber, and Kristen Ledlow stationed at the Pepsi Center.

While Porzingis may be the main reason why the game is being nationally televised, the Knicks’ coaching situation and Dallas point guard Luka Doncic’s early season brilliance will also be a major part of the telecast.

“It’s a good night to be here because there are a lot of stories to talk about,” Harlan told Awful Announcing over the phone.

As a quick refresher, New York took the 7-foot-3 Latvian with the third overall pick in the 2015 Draft and he was quickly anointed as the Knicks’ long-awaited savior. But soon after Porzingis was named an All-Star for the very first time during the 2017-2018 season, he tore his ACL and missed the rest of that season and all of last season. As time went by and he and Knicks management had a number of disagreements, New York shipped Porzingis to Dallas last January in a shocking six-player blockbuster.

“It’s a shame it didn’t work out because they had obviously thought great things,” Harlan said of Porzingis’ New York tenure. “But they found that maybe re-signing him was going to be a very difficult chore. And whatever he was sending out through his representatives, his camp, probably moved the Knicks to do what they did.”

Dallas now pairs Porzingis, who’s averaging 18 points and eight rebounds per game this season, with Doncic, who Harlan called the most exciting young player in the game.

“He’s a remarkable young player, putting up numbers in every category that we have not seen from someone this young so early in the season since Oscar Robertson,” Harlan said of Doncic, who’s averaging more than 28 points, 10 rebounds, and nine assists per game. “So he’s historically relevant. And they add Porzingis to that, who was an All-Star the last time he played 20 months ago, and they come in here as one of the real good stories of this early NBA season. While they come in riding high and Porzingis is still trying to find his game, he looks at the other side and sees a New York team where he once played that seems to be in a little bit of turbulence right now.”

After New York was embarrassed at home on Sunday by the Cleveland Cavaliers to fall to 2-8, Knicks president Steve Mills and general manager Scott Perry made an incredibly rare appearance in front of the media— reportedly at owner James Dolan’s urging— to express their unhappiness with the team’s start and essentially put head coach David Fizdale on notice. After a decisive defeat in Chicago on Tuesday in game 11, there’s increasing speculation and chatter that Fizdale could be coaching for his job against Dallas.

“My sense was that it was more that what happens in the second 10-game stint,” Harlan said of Fizdale’s fate. “That’s the way they have publicly said they’re evaluating this team, in 10-game increments.”

And while there will be plenty of emotion inside the arena for Porzingis and interest in how the Fizdale situation turns out, Harlan said that the national audience doesn’t really care that much.

“The Knicks nationally have been so irrelevant that I don’t really even think they draw a ripple,” he said. “Maybe a snicker because people are just amused at the constant chaos that seems to surround the team in trying to get themselves in gear. But nationally, it probably doesn’t go much beyond that. When they had Carmelo Anthony, they were a story. Porzingis, when they had him, he’s a story.”

And while Harlan acknowledges that New York brought in free agents Marcus Morris and Julius Randle and drafted Duke’s R.J. Barrett third overall, the casual fan tuning in may not know much about the Knicks.

“Right now, you’d be hard-pressed for NBA fans to name who is on the team,” he said.

While Inside The NBA will definitely have plenty of fun bashing the Knicks, Harlan said that he, Miller and LaForce also plan to address the coaching situation during the first half of the game.

“I think Reggie Miller, who has been a witness to so much in his NBA career, will give some context to the story. I want to hear what Reggie has to say about it,” Harlan said. “I think Allie will do her due-diligence as always. I think she’s such a terrific reporter and she’ll advance the story. But I think we’ll deal with it, and I think we’ll perhaps revisit it in the second half.”

Casual fans, Harlan said, are focused on bigger NBA storylines early in the season like LeBron James and Anthony Davis in Los Angeles, James Harden and Russell Westbrook in Houston and Doncic in Dallas.

“You’ve gotta be sensitive to what your national audience wants to see, what will appeal to them,” he said. “It’s the same old, same old New York, same issues, same turbulence, same things that continually just regenerate.”

Fans will tune in to see how Porzingis is received by the New York crowd and how he’ll perform under the spotlight, but Harlan said the focus should and will be on Doncic, who’s averaging nearly a triple-double per game early on in the season at age 20.

What won’t be the main thrust of the TNT game presentation Thursday night, according to Harlan, is the latest drama surrounding the New York Knicks.

“To be quite honest, it’s the same old story,” Harlan said. “And nationally, people just don’t care about it.”