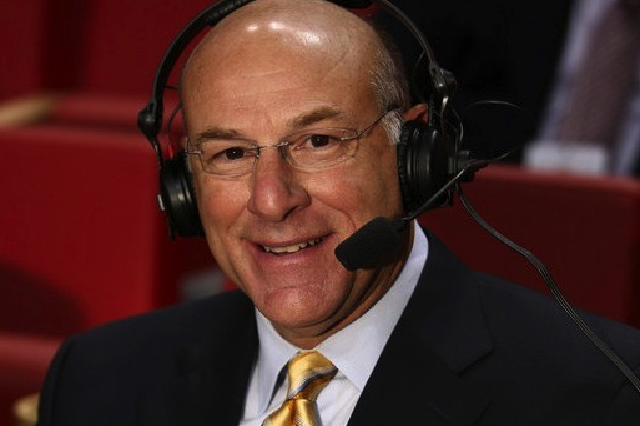 Presuming that the NBA season does restart on July 30 in Orlando, the voice of the Portland Trailblazers is going to be very different. Kevin Calabro, who has been the Blazers’ TV play-by-play announcer for four years, and was the voice of the Seattle Sonics for 21 years before that, is stepping down from the role. The 64-year-0ld said he is leaving the role to focus on his family, which includes his wife Sue and four children.

I’m told by a source this was not part of the Trail Blazers recent layoffs.

Also told no local NBA broadcasters will be in Orlando bubble. Games will be called from home studios in respective cities. https://t.co/qATVzAJPFF

Calabro will be replaced by Jordan Kent for the remainder of the 2019-20 season when it restarts. Kent is currently the TV studio host for Trailblazer broadcasts as well. Games will be called remotely from local studios instead of in Orlando.

After a stint calling minor league hockey, Calabro broke into NBA broadcasts as the play-by-play announcer for the Kansas City Kings, the franchise that would eventually move to Sacramento, in 1983. In 1987, he joined the Seattle SuperSonics broadcast team and called over 1,500 games for the franchise until they left to become the Oklahoma City Thunder. He would then move to become the play-by-play man on ESPN Radio’s NBA broadcasts. Along the way, he also did ESPN radio play-by-play for the NBA Conference Finals for a decade and became a contributor for TNT, Pac-12 Network, and Westwood One Sports.

Asked the great Kevin Calabro about parting ways with Blazers, he says, “We’re healthy and well! Just trying to keep it that way. Stepping out of the rat race for awhile. “ In my mind the best broadcaster in the game!

While Calabro was given the opportunity to follow the Sonics/Thunder franchise to Oklahoma, he decided not to go, endearing himself to Pacific Northwest sports fans. That endearment is part of what made his transition to Portland so easy in 2016. In 2018, the National Sports Media Association named him Oregon Sportscaster of the Year award as well as the 2018 Northwest Region EMMY Award as the “Best Sports Play-by-Play Announcer.”

For some, Calabro took some getting used to in Portland. The Sonics and Blazers had been strong rivals and Calabro’s hiring came on the heels of the firing of Mike Barrett, who was the voice of the Blazers between 2003 and 2016. That created some animosity that, to some, signaled that Calabro was always going to be a great broadcaster but never “our guy.”

Trail Blazers president Chris McGowan was tasked with selling the firing of Mike Barrett and the hire of Kevin Calabro to the public in 2016.

Thing is, it wasn’t his decision. Also, the fan grief that ensued wasn’t Calabro’s fault.

Regardless, Calabro leaves behind a positive legacy in Portland and tributes poured in from many in the Blazers and NBA community, including former broadcasting partner Lamar Hurd. Many others chimed in as well.

But to me he’s always going to be the voice of the Sonics.

Sending my best to KC and his family! https://t.co/mty7MXdZis

Kevin Calabro is one of the best NBA voices of all time. Sucks he won’t be on the Blazers call anymore.

Quick story: the @trailblazers and I auctioned off a 4 ticket package at the AHA Heart Ball. As soon as the bidding started I realized @KevinCalabro was raising his hand. He won. He then donated it to a fan who had dealt with heart issues. I was moved to tears. That’s Kevin. pic.twitter.com/6H5Sp3KcHT

For the time being, there is no such thing as the Seattle Sonics. But it certainly feels like it’s only a matter of time until the NBA returns to Seattle. And if that time comes once Climate Pledge Arena is ready, there’s one person in particular who is perfect for the job and just so happens to be available.