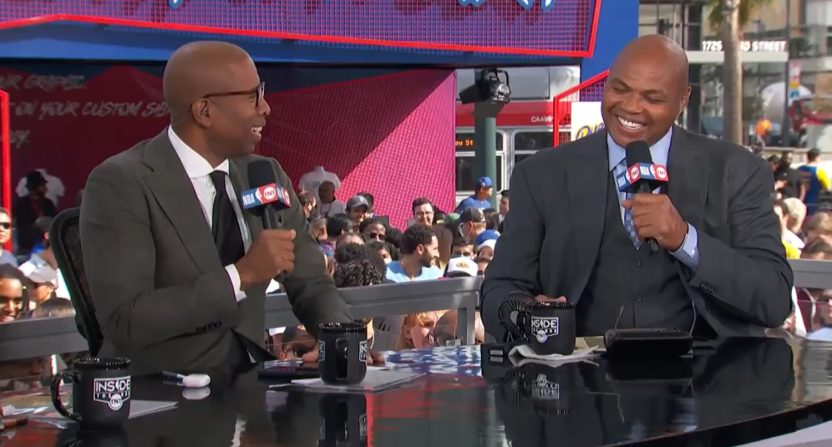 The 2022-23 NBA season tipped off Tuesday night on TNT. And despite a cast of interesting narratives throughout the league, Charles Barkley’s new contract was a dominating topic.

During Inside the NBA’s season debut, Barkley, Ernie Johnson, Kenny Smith and Shaquille O’Neal celebrated news that the entire crew signed long-term contracts with Warner Bros. Discovery Sports, keeping them on TNT for the foreseeable future. While details about the contracts were not announced, Andrew Marchand 0f the New York Post reported Barkley’s new deal is worth upwards of $200 million over 10 years. And as word of Barkley’s newly stuffed bank account got out, his Inside the NBA teammates made sure to keep bringing it up.

During their opening segment, O’Neal garnered a chuckle out of Barkley by referring to him as “Chuckie 200,” which received no pushback from the brash analyst. Shortly after, Johnson noticed Barkley was sweating profusely and faulted his heavy wallet. “That’s a lot to carry around,” Johnson said as Barkley chuckled again.

The basketball Hall-of-Famer cited his own wealth later in the show, when he said the bank now refers to him as “Mr. Barkley.”

“He better not be sitting down when I walk in there. He better meet me at the damn door,” Barkley joked of the bank manager.

But the best mention of Barkley’s new contract occurred when Inside the NBA played the game “Who He Play For?” During the appropriately titled segment, TNT displays the name and picture of a prominent player and Barkley is tasked with guessing what NBA team the play for. As Barkley inexcusably went 0-5 during the game, Kenny Smith hilariously noted “A guy just got paid a lot of money and he doesn’t know who people play for.”

Chuck did as well as expected in a new edition of "Who He Play For?" ? pic.twitter.com/0Z0n8NYqTq

Barkley just signed a massive contract to remain on TNT’s Inside the NBA that will pay him upwards of $200 million in exchange for bad analysis. But no one watches Turner’s popular NBA studio show because of Barkley’s ability to offer insight, they tune in because he’s entertaining. Amazingly, after more than two decades as an analyst, Barkley’s schtick has not diminished. In fact, his schtick has only grown, with Barkley morphing into somewhat of a folk hero who transcends sports with analysis that is often empty, but always amusing.

Barkley has already stated he doesn’t intend to fulfill the entire 10-year contract, anticipating that his desire to retire will kick in before the deal is up. But in the interim, it’s fair to wonder whether Barkley’s reported $200 million contract to be funny (and possibly to also appear on shows like Celebrity IOU) can create a rift between him and the rest of the Inside the NBA team.