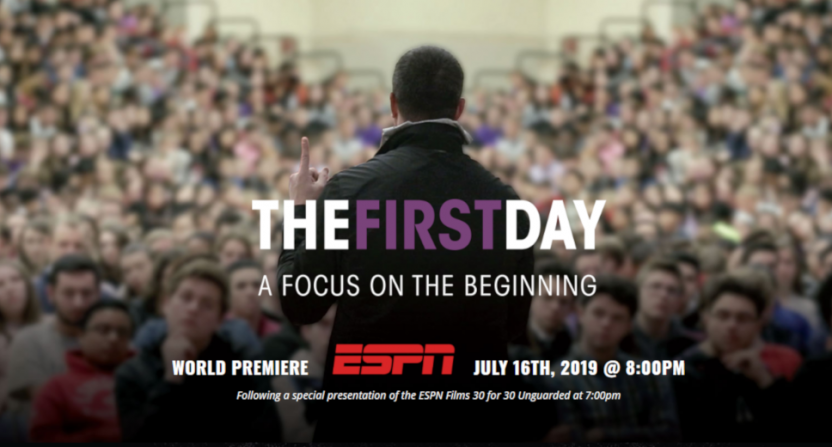 With plenty of sports documentaries, there are some questions about what happens to the subjects afterwards. In the case of Chris Herren, we’re going to get a feature-length follow-up. Herren was a high school basketball star in the early 90s and a hotly-anticipated recruit for Boston College, but he wound up expelled after testing positive for marijuana and cocaine on multiple occasions; he continued to struggle with substance abuse for much of the rest of his career (at Fresno State, in the NBA and overseas), and even overdosed on heroin and crashed into a pole in 2008, but then worked through an intensive rehab program and has been clean since then.

Famed director Jonathan Hock (Of Miracles and Men, Survive and Advance, One And Not Done) told Herren’s story in the 2011 documentary Unguarded (initially in the 13-installment “ESPN Films Presents” follow-up to the original 30 for 30 series, but those films are now considered part of the series), but there’s a notable coda to that. Herren’s since been speaking to kids and parents about substance abuse with a focus on why people start using, and that’s now going to be covered in The First Day, a film ESPN will air July 16 after a re-airing of Unguarded. Here’s more on that from a press release from Herren’s foundation:

Award-winning filmmaker Jonathan Hock has teamed up again with former professional basketball player and wellness advocate Chris Herren to take a deeper look into the struggles facing our youth today, including substance use, other harmful behaviors and mental health problems. The First Day film, presented by Center on Addiction and Cigna, is a new approach to prevention education. It focuses on the reasons why young people turn to substances in the first place, rather than dwelling on later stages of the disease of addiction.

…”The focus oftentimes is about the worst day when it comes to speaking about addiction and not the first day,” said Herren. “Kids and parents need to understand how this begins rather than how it ends. Prevention starts on the first day.”

…“When I started to think about creating a new film on my journey, I knew that I needed to share what I saw in the eyes of the students nationwide,” said Herren. “As I travel the country and share my story in high school gyms and auditoriums, I have a unique vantage point. I can see the struggle and the pain. We need to uncover why our youth are turning to substances. We need to start the conversation and acknowledge that the ‘why’ is the beginning.”

“As a parent of teens myself,” Jonathan Hock added, “I see every day the challenges young people face navigating their lives – both real life and on social media – amid so much stress relating to identity, school, drugs and alcohol. Making a new film with Chris was another, even greater opportunity for me to change lives as a filmmaker. The First Day is for young people, but it is also equally for parents, teachers, community leaders and mentors. Chris has something to say to all of us so we can reach this new generation in need, and I think it’s the most important film I’ve made in my career.”

As Richard Deitsch writes at The Athletic (item #2), Hock came up with this idea after going to watch one of Herren’s presentations, saying “Chris connected with the kids in such a powerful way, and I saw in the kids’ faces a rawness and honesty and vulnerability that haunted me.” And what’s particularly interesting is the approach Hock took to filming this, focusing not so much on shots on Herren, but on shots of the faces listening to him. He said he was inspired by Robert Drew’s “Faces of November,” the 1964 12-minute documentary for CBS News on the funeral of President John F. Kennedy that primarily focused on the faces in the crowd, telling Deitsch “What we discovered in the cutting room was not a portrait of Chris but a portrait of the young people of this country at this very difficult time to be a young person. Those are the people who deserve to hear their story told, who need to know that they are what matter, and it’s their own lives they need to take a hard look at.”

It’s interesting to see ESPN airing this kind of a follow-up, as they haven’t often done that at full documentary length. There have some follow-ups to E:60, Outside The Lines and SC: Featured pieces, but those have usually been shorter than the original piece in question. And the one real 30 for 30 sequel, The U Part 2, covered a lengthy and notable timespan in its own right. This doesn’t appear to carry the 30 for 30 branding or to be a standard documentary (it’s focused just on Herren’s presentation), so it’s not exactly a full sequel, but it’s notable to see ESPN airing it and to see them broadcasting it back-to-back with Unguarded, providing a further look at what happened next for Herren. And Hock’s certainly proven he’s able to tell compelling stories of athletes facing major challenges and coming out the other side, from Unguarded to The Best That Never Was to this April’s The Dominican Dream. Herren’s approach also makes this sound like it’s going to be far from a typical high school presentation on drugs. We’ll see how this turns out when The First Day airs on July 16.