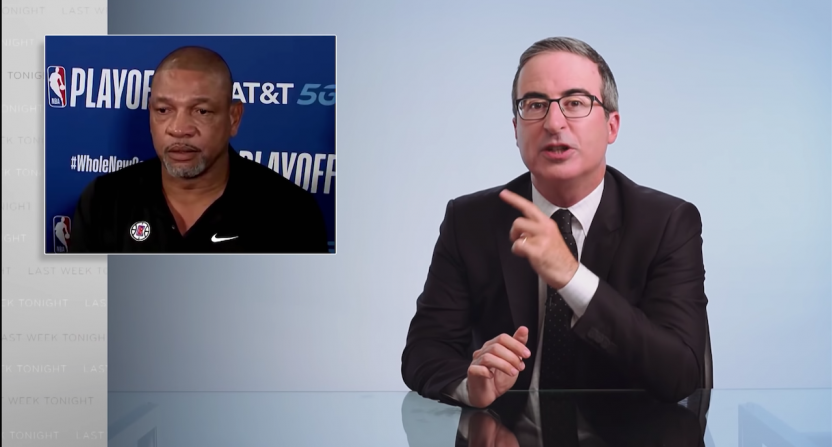 Whenever sports is part of John Oliver’s commentary on HBO’s Last Week Tonight, it either means that he wants to take a deep dive into a topic that reflects a larger problem in society or feels something has to be addressed.

The past week’s player protests by NBA playoff teams might fit into both categories, though Oliver discussed those walkouts in relation to the outrage over the Jacob Blake police shooting in Kenosha, Wisconsin. Using the term “wildcat strike” to define what was initially described as a “boycott,” then a “strike,” Oliver applauded NBA and WNBA players taking the sort of action that was bound to draw attention — which is the point of a protest.

“Eventually, wildcat strikes spread throughout both leagues in an unprecedented and genuinely inspiring show of collective action,” Oliver said. “And they did this without union approval, so they were putting a lot on the line; their income and maybe even their careers.”

For those who followed the past week’s developments in the NBA, what Oliver has to say won’t be new to you. But he’s presumably talking to an audience of casual fans or viewers who don’t follow sports closely. He begins talking about the NBA at the 13:03 mark of this video:

Oliver went on to take a shot at a political figure who publicly dismissed the NBA protests as rich guys taking a day off, suggesting that the person in question “get f**cked.”

“They are not taking a night off from work,” ranted Oliver. “The emotional toll of being Black in America, combined with the pressure to perform at an elite level during a global pandemic is pretty taxing. So by not playing, they’re not exactly taking a spa day.”

Bucks player Sterling Brown had a knee to his neck and was punched by Milwaukee PD for parking incorrectly.

Former Buck John Henson had the cops called on him while shopping for jewelry, just for being black.

This is personal to them.

Furthermore, Oliver pointed out (at the 17:22 mark) that NBA players tried social justice messages to raise awareness of racial injustice, police violence, and systemic racism, while the league put “Black Lives Matter” on the courts in the NBA bubble. But that didn’t work.

“Is it any wonder that basketball players felt they had to escalate their protests by not just wearing a jersey, but by striking?” said Oliver. “And in doing so, putting team owners’ money at jeopardy because real discomfort is the only thing that will bring about real change here.”

Oliver didn’t even mention that players were considering leaving the Orlando bubble and bringing the NBA Playoffs to an end before eventually deciding to finish out the season.

The NBA player strike certainly accomplished the objective of getting attention. Discussion of the walkout drew national headlines and dominated cable news discussion last week while furthering discussion of the Blake shooting and protests it fueled throughout the country.

“This isn’t the last disruptive action like this that we’re going to see going forward, nor should it be,” said Oliver.

Related: The Bucks will make sure you don’t forget that this country is broken