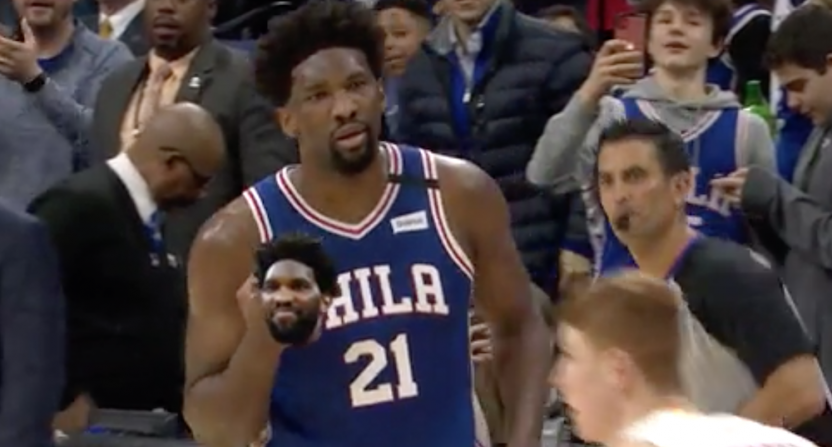 Philadelphia 76ers star Joel Embiid provided some amusing, though not safe for work, moments at the end of his team’s 129-112 win over the Atlanta Hawks Monday night.

Embiid’s career-high 49 points and 14 rebounds should probably receive all of the attention. But since it was captured by TV cameras (and subsequent screen-caps), Embiid giving the middle finger to Atlanta’s Kevin Huerter at the end of the game gets some spotlight.

Oh, and while talking about it in a postgame interview, Embiid slipped with a profanity. All in a night’s work for the young center.

The gesture in question occurred with less than 20 seconds remaining in the ballgame and the Sixers holding a 17-point lead. Embiid rebounded a missed Trae Young three-pointer and dribbled the ball into Philadelphia’s frontcourt. Just past the midcourt line, Huerter ran up from behind and stole the ball from Embiid.

Joel Embiid subtly flips Huerter the bird after Huerter steals the ball while down 17 with 30 seconds left. pic.twitter.com/aqcn5TPckY

Apparently irritated that Huerter didn’t let him dribble out the clock (or go for 50 points), Embiid flashed a middle finger at him. It’s difficult to see from the full-court camera view, but Embiid does give a gesture to Huerter as the two head back down the court.

NBC Sports Philadelphia’s cameras got a closer image of Embiid flipping the bird, though obscured the expression for TV audiences.

Embiid also dropped an f-bomb during a postgame interview with Serena Winters while denying that he said he was the best player in the world after scoring 39 points in last Friday’s win over the Brooklyn Nets.

“Yeah, I believe I am,” Embiid said. “But when I made that statement, I didn’t actually say that I was. I said that, you know, being among the best players in the world, I proved myself and that’s what I said. But yeah, f*** — my bad — I do believe it.”

Embiid followed up by apologizing for giving the middle finger to an opponent on the court, knowing that he was likely caught doing so by TV cameras.

“I also want to say, I’m sorry for what I did at the end of the game,” said Embiid. “Y’all probably saw that on TV. I’m sorry. Thank you.”

Without slipping another profanity out, Embiid elaborated on why he was annoyed when talking to reporters afterward.

“I’m running the clock down and I feel like the game is over. That’s why I’m doing it,” Embiid explained (via Sporting News). “But to me, if the other team is gonna keep playing defense, and they’re gonna keep shooting the ball at the other end, I feel like we should just be like, ‘Well, be better next time,’ and just go out and score.”

Huerter was asked about the play and if he saw Embiid giving him the finger, which he apparently didn’t.

“There was a full shot clock left. I’m going to play,” said Huerter. “There were 23 seconds left in the game. I don’t know what he wants. If he did, I’m not gonna speak on that. It’s not out of his character, I guess.”

Whether with his basketball skills, interactions with fellow players, or interviews with media, Embiid is a multi-faceted entertainment source. Maybe even the best in the world.