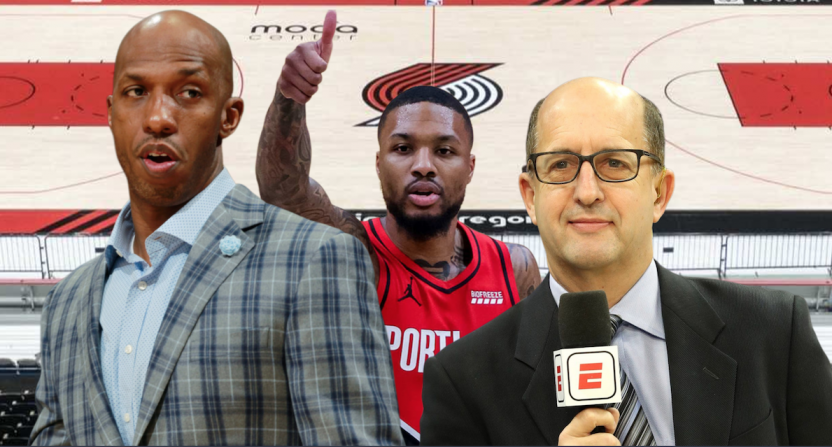 Following another early exit from the NBA Playoffs, the Portland Trail Blazers could be the most intriguing team of the offseason. And it’s possible that their decisions could affect ESPN’s NBA broadcasts as well.

The Blazers were eliminated from the 2021 NBA Playoffs on Thursday, Portland’s second consecutive first-round postseason exit (and fourth in the past five seasons). As expected, head coach Terry Stotts was fired and ESPN analyst Jeff Van Gundy was among the lists of replacement candidates immediately reported by insiders such as Adrian Wojnarowski and Shams Charania.

One coach who won’t be taking the Portland job is Jason Kidd, despite Blazers superstar Damian Lillard telling Yahoo Sports’ Chris Haynes that the Los Angeles Lakers assistant and former NBA point guard was his top choice. Yet according to Wojnarowski, Lillard making his preference public made Kidd uncomfortable — maybe because it would like the star player chose the coach — and he took his name out of the running.

Does that mean Van Gundy should be considered a viable candidate? He’s recently been attached to openings with the New York Knicks and Houston Rockets.

Is JVG trying to do the running man? ? pic.twitter.com/HaT3uYXaAD

Last year, he was one of the finalists for the Rockets opening that eventually went to Stephen Silas. However, Van Gundy reportedly could’ve had the job if he wanted it. But he was concerned over the fit with new Rockets general manager Rafael Stone, who replaced Daryl Morey. (Also, James Harden and Russell Westbrook apparently didn’t want to play for Van Gundy.)

Based on initial reports, however, another recent broadcaster might be higher on the Blazers’ list. Chauncey Billups, who left the Los Angeles Clippers broadcast booth for an assistant coach position with the team, is also among the prospective candidates. Like Kidd, he’s been a successful point guard, which might appeal to Lillard.

Billups was an analyst for ESPN from 2014 to 2019 before moving to the Clippers. The former NBA guard has previously been rumored for head coaching and general manager openings. But Billups had no experience in those positions, which is likely why he agreed to join Tyronn Lue’s staff.

Perhaps the most likely candidate for the Blazers job is Mike D’Antoni, currently an assistant with the Brooklyn Nets.

If Portland wants someone with head-coaching experience, D’Antoni is only one season removed from a four-year stint with the Rockets. He’s also been a head coach for the Phoenix Suns, Los Angeles Lakers, and New York Knicks. D’Antoni would certainly keep the offense humming for Lillard and the Blazers. But defense is where this team needs to improve — and the front office may move the roster in that direction — and that hasn’t been D’Antoni’s specialty.

A preference for defense could make Michigan coach Juwan Howard appealing, but would he leave Ann Arbor with his son Jace on the roster and another, Jett, possibly on the way?

Tough defense has also been a trademark of Van Gundy’s teams with the Knicks and Rockets. If Portland truly wants to go in a different direction from the past nine seasons under Terry Stotts — unless the team wants to go crazy and trade Lillard — this would certainly bring a culture change. Would Blazers GM Neil Olshey fit better with Van Gundy than Stone would’ve in Houston?