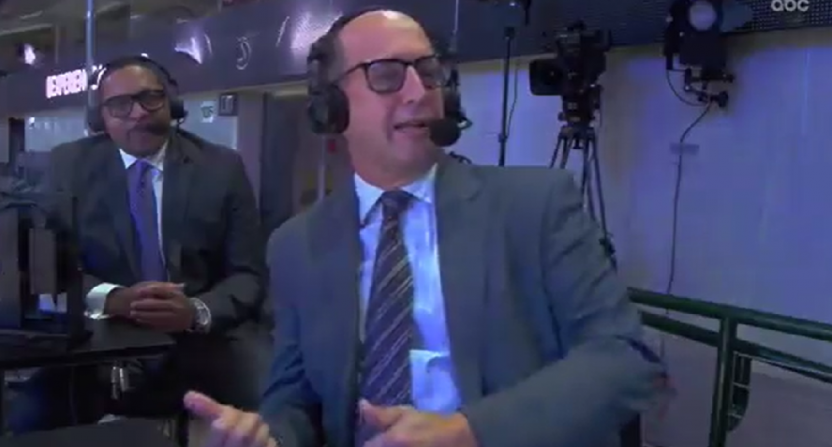 Tonight’s ESPN on ABC NBA broadcast has been a lot of fun, in large part because of Steph Curry absolutely going off to keep the Warriors on the contest against the Mavericks.

Luka Doncic has also been great, but when Steph is hitting shots like this one he’s basically impossible to guard:

Steph from the logo draws a textbook "BANG!" from Mike Breen pic.twitter.com/pD2D5qo0dP

Coming back from that break, though, viewers were treated to footage of Jeff Van Gundy attempting what he confirmed to be the Running Man:

Is JVG trying to do the running man? ? pic.twitter.com/HaT3uYXaAD

When questioned about the dancing, Van Gundy pointed out that there’s a lot of time to kill amidst a pandemic (all too true!) and he’s focused his energy on two practices: dancing and watching cop shows.

That statement led to a pivot into Law & Order: SVU discussion, with Breen and Jackson audibly trepidatious about where the conversation was heading.

Hard to argue with Jeff’s logic there, albeit it’s also hard to take someone’s police procederual analysis seriously coming right off of that performance of the Running Man.

Speaking of cop shows, maybe the broadcast can get to the bottom of whose phone was briefly ringing in the first half:

At first that almost felt like a super-annoying choice for in-arena audio, but upon relisten it really does feel like someone in the booth had a phone call without being on silent.

Get some detectives on the case, if they can be spared from whatever atrocities they’re currently looking into at Hudson University.