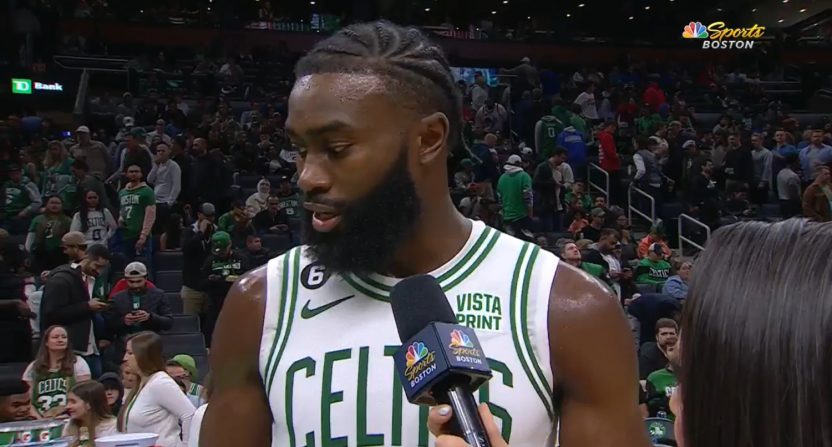 Hot mic swears making their way into sports broadcasts are somewhat routine, but dropping a blatant f-bomb during an interview still generates a different level of excitement for the unsuspecting viewer. And if the f-bomb is followed by a good reaction from the reporter conducting the interview, that just brings the incident to a whole new level.

The Boston Celtics played their second game of the NBA preseason Wednesday night. And while the NBA preseason might be the most boring part of the league calendar, Celtics shooting guard Jaylen Brown spiced it up a bit with 23 points and an interesting interview.

Following the first half, Brown was interviewed by NBC Sports Boston sideline reporter Abby Chin who asked the All-Star about showing little signs of rust so far this preseason.

“Getting into game shape, getting the reads on time, learning to play with my new teammates and knocking down the free throws. F*ck,” Brown said as he appeared to get a little frustrated and threw his towel to the ground.

“Whoa!” Chin replied with surprise after Brown dropped an f-bomb on live television. “Excuse us.”

The audience likely shared Chin’s surprise as the rest of Brown’s answer was PG and topical. Brown knocked down just two of five free throw attempts on the night, which may have contributed to the frustration he displayed. But the f-bomb and towel toss really came out of nowhere, almost as if they were unrelated to the rest of his answer.

The 25-year-old shooting guard is coming off an offseason where his name spent a lot of time being mentioned in trade rumors, heading a potential package that could have brought Kevin Durant to Boston. Ultimately, however, Durant remained with the Brooklyn Nets and Brown is still in Boston. But that doesn’t mean those trade rumors didn’t put a chip on Brown’s shoulder.