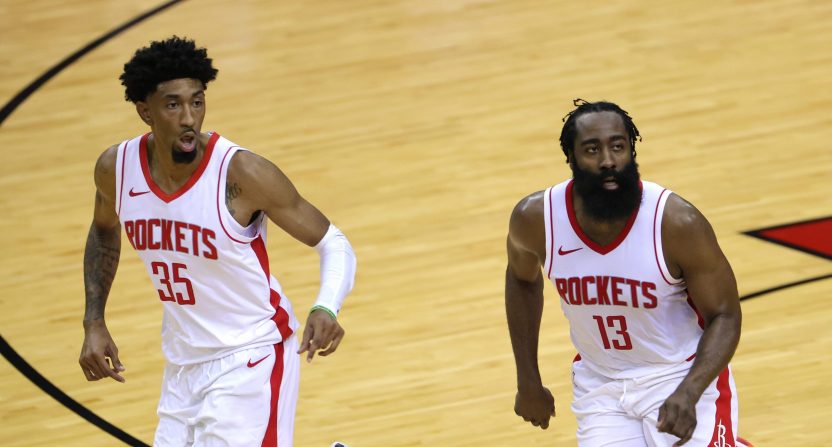 The Houston Rockets are in the midst of a major overhaul, at least in terms of their roster. The NBA franchise traded Trevor Ariza on draft night, recently traded away Russell Westbrook for John Wall, and the writing is on the wall for star James Harden to head out of town sooner than later as well.

Any time there’s a player wrapped up in prolonged trade rumors, it’s going to create some bad vibes with fans left behind as well with those close to the franchise. So it wouldn’t be surprising to find out that certain people associated with the Rockets organization were miffed by Harden’s will-he-or-won’t-he routine in recent days.

On Thursday night, the Rockets took on the San Antonio Spurs in NBA preseason action when free-agent signee Christian Wood had himself a night, tallying 27 points, 10 rebounds, 2 assists, a steal, and a block in 24 minutes of game action. The big-time performance was a sign of the potential that will remain in Houston if and when Harden leaves. And perhaps Rockets play-by-play announcer Bill Worrell was thinking about that when, on a particularly impressive coast-to-coast play by Woods, he asked the question, “Who needs James Harden?”

It should be noted that Harden was also on the court during this play.

Social media certainly heard the question and started wondering if it was meant to be petty or not (but mostly that it sure sounded petty).

This Rockets announcer took it there ? pic.twitter.com/csPJG5TEuT

David Barron of The Houston Chronicle spoke with Worrell to find out any insight on his intention and get a little clarification. Worrell attempts to deflect what seems like an obvious connection to Harden’s rumored trade demands by insisting that it was meant to be more literal than that.

“Matt and I had been saying how much these two guys were going to feed off each other, Harden being the great passer and (Wood) being the great finisher,” Worrell said. “We thought Harden might get back the pick-and-roll game he lost when (Clint) Capela left.

“This was the first time we had seen Wood play, and we were impressed. He got the rebound and looked to pass it to Harden, but Harden was not facing him, so he started upcourt. He was dribbling righthanded and then went to the left hand and went in. Even if he had been a guard, I would have been impressed.”

Given hindsight, Worrell said he would have been better served to say, “He didn’t need Harden on that play.”

So you can take Worrell at his word, or not. We’ll leave that up to you.