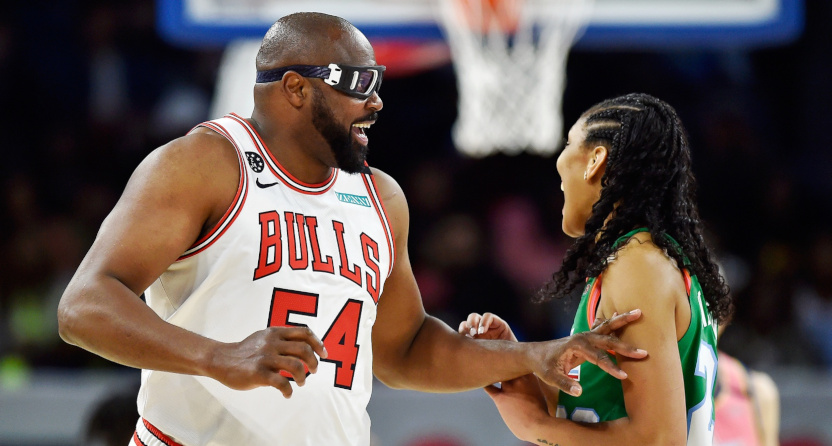 While The Last Dance  drew remarkable viewership and impressive reviews, it’s also faced criticism, particularly over the involvement of the Jordan brand production company (Ken Burns delivered a notable shot on that front) and the ways Michael Jordan and others were portrayed. Now, one of the Chicago Bulls’ players depicted has added to those criticisms, with Horace Grant (who played for the Bulls from 1987-94, and is seen above with A’ja Wilson during the 2020 NBA All-Star Celebrity Game) going off on Jordan and the “so-called documentary” during a radio interview with ESPN 1000 Chicago’s David Kaplan Tuesday. Here’s that full interview:

And here’s a transcription of some key parts, via ESPN’s Nick Friedell:

In a radio interview with Kap and Co. on ESPN 1000 in Chicago on Tuesday, Grant said it “is a downright, outright, completely lie” that he leaked much of the information in Sam Smith’s famous “The Jordan Rules” book, as Jordan alleged during the documentary.

“Lie, lie, lie. … If MJ had a grudge with me, let’s settle this like men,” Grant said during the interview. “Let’s talk about it. Or we can settle it another way. But yet and still, he goes out and puts this lie out that I was the source behind [the book]. Sam and I have always been great friends. We’re still great friends. But the sanctity of that locker room, I would never put anything personal out there. The mere fact that Sam Smith was an investigative reporter. That he had to have two sources, two, to write a book, I guess. Why would MJ just point me out?

…”Charles Barkley, they’ve been friends for over 20, 30 years,” Grant said. “And he said something about Michael’s management with the Charlotte Bobcats or the Charlotte Hornets, and then they haven’t spoken since then. And my point is, he said that I was the snitch, but yet and still after 35 years he brings up his rookie year going into one of his teammates’ rooms and seeing coke, and weed and women. My point is: Why the hell did he want to bring that up? What’s that got to do with anything? I mean, if you want to call somebody a snitch, that’s a damn snitch right there.”

Those are certainly notable criticisms from Grant, and on some levels, he makes good points. For one, the Jordan take on Grant and The Jordan Rules is silly on a few fronts. Most of the information in that book is actually sourced on-the-record, not anonymously. As Bryan Curtis wrote in a 2017 look back at the book at The Ringer, it stands out for that versus how most NBA information comes out now: “Even the great Woj’s version of The LeBron Rules would be necessarily told through the mouths of anonymous sources. Back in 1991, Smith was able to show most of his work.” And Smith himself discussed that in conversation with Jamal Collier of The Chicago Tribune (Smith’s old paper) this month:

At the same time, everything in the book is kind of on the record. There wasn’t like “league sources,” people were quoted by name. This is what they said he did. So the players were great. The players were like, “Somebody stood up to the bully.”

Yes, there is some anonymously-sourced information in The Jordan Rules, but it’s not the majority of the work. And even with that information, it’s pretty clear where a lot of it’s coming from, and it’s not Grant. Then-Bulls coach Phil Jackson has long been painted as a key source for the anonymous content, and that makes a lot of sense, especially considering that the book is relatively favorable to him and that he’s claimed its publication was good for the team. Curtis’ look back at the book also discusses a key sideline exchange that seems clearly leaked by Jackson. So it’s pretty funny to hear Jordan going off at Grant rather than Jackson over this (to say nothing about still being mad about a book almost three decades after its publication), and Grant’s pushback on that front seems more than fair.

As per the discussion of if Jordan has “the last word” on what appeared in The Last Dance, that’s perhaps a little more nuanced. The Last Dance director Jason Hehir responded to Burns’ criticisms last week in an interview with Richard Deitsch of The Athletic, and said that Jordan himself wasn’t directly involved in production, and that even the Jordan brand executives involved didn’t have final cut notes:

“He (Burns) expressed that his world is a PBS world and they have underwriters and if any of those underwriters are even remotely affiliated with the subject, they’re not allowed to be associated with the project. So those rules that are put in place by PBS are very stringent. Obviously, with this project, we weren’t under the same parameters, We are not working in the same parameters. It should be noted that it’s not Michael’s production company. Michael didn’t have a production company. The Jordan brand — meaning Curtis Polk (who manages the financial and business affairs of Jordan and is an executive with the Hornets) and Estee Portnoy (Jordan’s longtime business manager) — gave notes just like ESPN and Netflix and the NBA gave notes. But those were not final cut notes. With a league such as the NBA or MLB or NFL or NHL, if that is inherently not journalistic if they have editorial input, then sports documentaries would cease to exist. Because you have to license the footage through these entities, so they own it. Of course, they get a say in it. We made it very clear early on in this process that we wanted to tell a comprehensive story. No one was interested in this being a puff piece. Most of all, the Jordan brand and the NBA.

“I had my fears going into it. That they would exercise their right to disagree with certain storylines and to pull certain pieces of footage. But there is never one moment where Michael Jordan or his representatives said you cannot talk about this subject, or this is off-limits. Don’t ask this question. There wasn’t one moment that they said take this out because it doesn’t reflect well on Michael. The moments that we were allowed to include, I’m still surprised that they were OK with us using. He certainly had the right to wield that power and he never did. So it’s tricky. I am a storyteller. That’s the business that I am in. We are given access to tell people’s stories and oftentimes these people are very precious with that access. So I take it very seriously that people have given us the trust and the responsibility to tell their story fairly and accurately.”

Thus, from Hehir’s side at least, that’s certainly not Jordan having “the last word.” But Grant also does make a valid point that this was a documentary produced with a lot of cooperation from Jordan, and from people close to Jordan, and from the NBA itself. And while Hehir may be “surprised” that he was able to include some moments that didn’t reflect well on Jordan, the documentary as a whole is not generally seen as too unfavorable to Jordan. In fact, it’s already sparked pushback from neutral parties about the portrayal of Bulls’ general manager Jerry Krause (who died in 2017), and from Krause’s family, who have released excerpts of his unfinished and unpublished memoir through NBC Sports Chicago to try and get his side of the story out there. It’s also notable that The Last Dance did not challenge Jordan’s assertion that Grant was a key anonymous source for The Jordan Rules, something which (as discussed above) seems factually questionable.

So while the specific claim of Jordan having “the last word” is perhaps going too far, this documentary definitely did portray a lot of Jordan’s perspective (even with decisions like having Jordan react to commentary from other people). That doesn’t necessarily invalidate the project entirely, and there are few (if any) documentaries that are truly neutral. But it’s certainly worth thinking about whose perspectives The Last Dance highlights more and what sides of the story receive less attention, or aren’t told at all.

Overall, it’s fascinating to hear Grant push back on The Last Dance in such strong terms. And his comments are valuable on a couple of fronts. For one, they illustrate how one of the non-Jordan players featured in this felt about the final product. For another, they provide some pushback on the Jordan assertion that Grant was a key source for Smith. And for a third, they show how the involvement of Jordan and business reps close to him was seen by another figure involved. This isn’t necessarily “Grant is right and Jordan is wrong,” or “The Last Dance is trash overall because Jordan’s business reps were involved,” but it’s one more point of context to consider when watching this documentary.