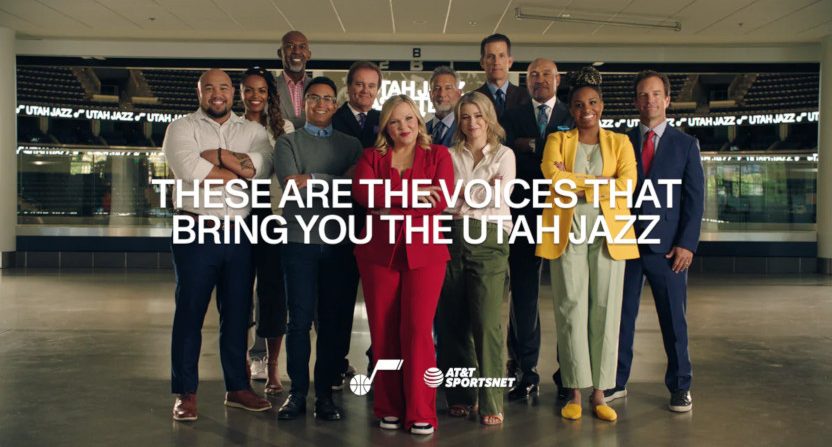 The changes in the NBA team broadcasting ranks continue. The latest move sees Holly Rowe joining the Utah Jazz as an analyst for their coverage on AT&T Sportsnet Rocky Mountain. Rowe has been at ESPN/ABC since 1998 in a variety of roles, and took on the reporter role on their top college football team with Chris Fowler and Kirk Herbstreit this year (replacing Maria Taylor); she’ll continue with at least that assignment with ESPN/ABC for at least this season. (At the time of that move in August, an ESPN release said Rowe would “begin her new duties in August as part of her existing multi-year contract,” but it’s unclear if she’ll remain with ESPN past this college football season, as that’s the only thing she specifically references in comments about this new position with the Jazz.)  But she’ll also have this new role with the Jazz, and that’s a good fit for her.

Rowe grew up in Utah, and attended both BYU and the University of Utah, graduating from the latter school in 1991 with a degree in broadcast journalism. She spent lots of time working with the Jazz in various roles (and working in Utah, including as a broadcaster for BYU women’s volleyball and gymnastics, and with a variety of Salt Lake City stations), and worked with returning Jazz TV voice Craig Bolerjack at ESPN. Here are a few quotes from Rowe in a piece posted on the Jazz site: (which is worth reading in full; it also includes much more from Rowe, and perspective from Bolerjack):

“This is personal and like coming home for me. … This is definitely a full circle moment for me,” Rowe said. “For over 20 years I’ve worked in one capacity or another at different times with the Jazz — pulling cables, stage manager, done jobs in the TV truck, every possible job for them, I’ve done it.”

…“Utah is my home. … My family is here,” Rowe said. “When the Jazz reached out to me, when Bart (Sharp, Chief Marketing Officer) emailed me, he said this is random but asked if I would be interested in the role. I was shocked. I’ve covered basketball for 30 years and now I get to stay involved with a team I grew up with.”

…“I’m very grateful that ESPN is willing to let me work this opportunity, just work around their schedule,” Rowe said. “They gave me the okay and I’ve been able to fit it around my existing responsibilities.”

…“My first ever game on ESPN was with Craig (Bolerjack), so it’s really amazing to have this opportunity again,” Rowe said. “I’m excited to be a part of the team. … To be working with Craig and Thurl (Bailey, analyst for the Jazz), I can’t wait to get started with them.”

Rowe also tweeted about this:

Home is where the heart is.?
Honored to join this team.
Let’s go JAZZ.@utahjazz https://t.co/0zrtJCyDOR

It’s neat to see Rowe land a job in an area of the country that has meant and continues to mean a lot to her. And it’s interesting that at least for this season, she’ll continue with her role on ESPN’s top college football team as well. Rowe’s hire also adds to the wave of talented female sportscasters we’re seeing tabbed for major roles on NBA team broadcasts, including Lisa Byington and Kate Scott (in play-by-play roles with the Milwaukee Bucks and Philadelphia 76ers respectively). It will be cool to see what she does as an analyst with the Jazz.