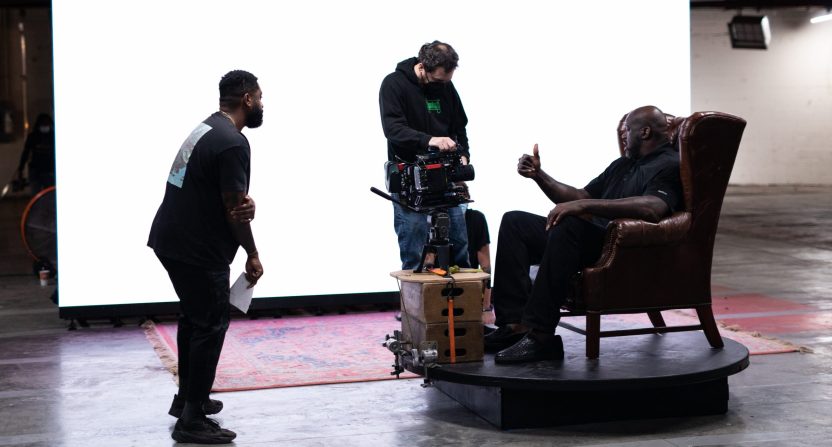 Shaquille O’Neal has been part of Turner Sports’ (now Warner Bros. Discovery Sports) Inside The NBA cast since 2011. With that cast all signing recent extensions, he’s set to continue in that role for some time to come. Now, he’ll also be the subject of a four-part documentary series premiering on HBO (part of WBD) in November.

This HBO Sports Documentaries-presented SHAQ series on O’Neal, from director Robert Alexander and Peter Berg’s Film 45, will debut with a one-hour installment on  Wednesday, Nov. 23 at 9 p.m. ET/PT. Further episodes will follow on the next three Wednesdays, and it will also be available to stream on HBO Max. An exclusive clip will debut on Thursday’s Inside The NBA on TNT. Here’s more on what to expect from a release:

Featuring a series of revealing interviews with O’Neal, SHAQ tells the story of a basketball legend unlike any other, whose larger-than-life personality transcended the sport and transformed him into a cultural icon. The documentary series chronicles Shaq’s ascent to superstardom, as a dominant force who won four NBA championships, league MVP honors, and changed the game. It also encompasses his life off the court, from his upbringing in a military family to his deepest personal relationships and prosperous broadcasting and business careers.

And here’s a quote from O’Neal from that release:

“We kept this documentary real from the start, and I do feel like it is the most honest look into my life and career up until this point. This process allowed me to reflect publicly in a way I haven’t before, and I’m so proud of the work everyone has done to put it all together.”

The series’ first episode is “From Shaquille to Shaq,” on O’Neal’s childhood, path to the NBA, and early NBA career with the Orlando Magic. The second episode, “The Rise,” will focus on his early time with the Los Angeles Lakers. Third episode “The Fall” will cover the Lakers’ three-peat, but then his exit from that team, and episode four “From Shaq to Shaquille” will look at his post-Lakers’ time, including his 2006 championship with the Heat and his eventual exit from playing to a business and broadcasting career.

It sounds like this is mostly going to focus on O’Neal’s playing career with a bit on his post-career business life. And that makes some sense, as his broadcasting career already got a fair bit of attention in previous Inside The NBA documentary series The Inside Story. But there may still be some interesting broadcasting tidbits to come out of this, especially in that final episode.