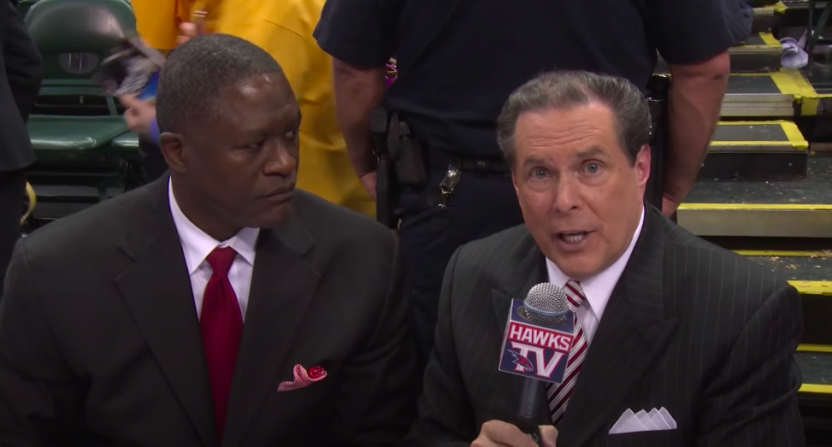 Following a few years of retooling and rebuilding, the Golden State Warriors are back on top of the NBA. And that means Steph Curry is doing some very Steph Curry things while they’re there.

The Warriors moved to 9-1 on Monday night following a 127-113 win over the Atlanta Hawks and Curry was, not surprisingly, the catalyst for the victory. Steph scored an NBA season-high 50 points, shooting 14-for-28 from the field, 9-for-19 from 3-point range, and 13-for-13 from the free-throw line. He also garnered 10 assists and seven rebounds in 35 minutes of action.

Curry’s certainly had even more impressive games but that doesn’t mean the Warriors faithful can’t appreciate the effort, especially given the way this season has justified the lean years since their run to five consecutive NBA Finals. They gave Curry a standing ovation when he hit the 50-point mark and celebrated the return to form for Golden State.

One person not overly impressed by Curry’s efforts was Atlanta Hawks play-by-play announcer Bob Rathbun, who pondered aloud what, exactly, is the big deal, anyway?

Hawks Play by Play guy in his feelings about Steph getting 50 pic.twitter.com/t1IdYBfNwb

“I mean, okay, he’s got 50. Is it really that big a deal?” asked Rathbun following the big bucket.

“Obviously,” said announcing partner Dominique Wilkins, who knows what it feels like to have a game like this.

“I mean you won championships, you’ve been an MVP, you’re going to the Hall of Fame, what’s the big deal about getting 48 or 50? I don’t get that.”

Wilkins then tries to add some perspective into the mix, saying, “As a player, I could see it.”

“Yes, you’re up by 20 before that shot,” Wilkins responded. “I mean it makes no difference. But I’ve seen that happen so many times.”

On paper, you can see what Rathbun is saying. But in reality, it’s pretty silly to think that a home crowd isn’t going to celebrate their guy getting 50 points regardless of the circumstances. Did Chicago Bulls fans ever get tired of seeing Michael Jordan put up crazy numbers just because he won championships? Of course not. Great performances are great performances and fans will always want to show appreciation for what’s right in front of them.

Ultimately, Rathbun’s just offering up a bunch of sour grapes because the team he works for is getting their butt kicked.