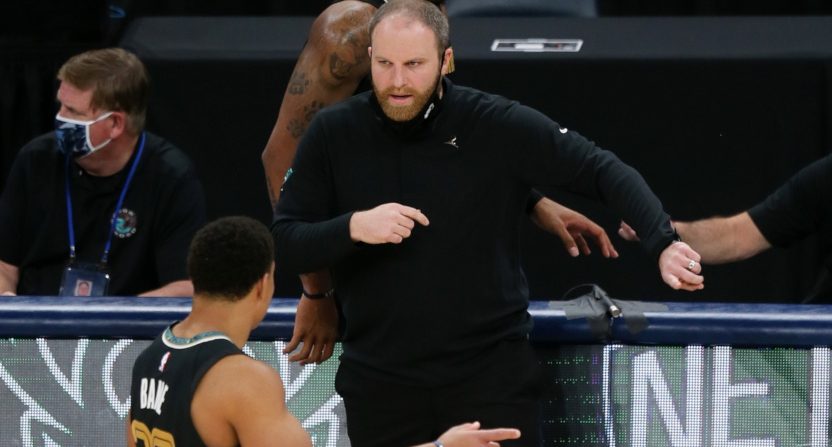 The NBA’s 2020-21 season so far hasn’t gone according to plan. The league began play on Dec. 22, and less than a month later, they’ve had to postpone 16 games thanks to teams not having enough players due to COVID-19 positive tests and/or contact tracing, with 15 of those postponements coming after Jan. 10. The latest there is the Memphis Grizzlies-Portland Trail Blazers game that was set for Wednesday night, but called off thanks to Memphis (coach Taylor Jenkins and guard Desmond Bane are seen above in Monday’s game against Phoenix) not having enough players available. Here’s more on that from Tim Reynolds of The Associated Press:

The decision about the Portland-Memphis game came on the same day that the league, in a memo sent to teams and obtained by The Associated Press, reiterated some of the new stiffer protocols that were agreed to last week.

Starting with Wednesday’s games, the NBA told teams to have their security officials “stationed near the half-court line during pre-game warmups and post-game to provide reminders to players and staff and encourage compliance” with the rules regarding interaction.

The NBA, last week, said players must maintain six feet of distance as much as possible during pre-game warmups and post-game meetings — a rule that has not been followed in many circumstances, even with the additional urging from the league about its importance.

Players, the NBA reminded Wednesday, must limit their interactions to elbow bumps and fist bumps. Hugs and handshakes are not permitted, and when players are exchanging pleasantries after games they remain “strongly encouraged to wear facemasks during any such interactions,” the league said.

What’s also notable here is how all these postponements (and there could be more to come; for example, Memphis currently is scheduled to play in Portland Friday as well, but a decision on that game hasn’t been made yet) could impact the league’s plans for second-half scheduling. As Marc Stein of The New York Times noted, 21 of the NBA’s 30 clubs have had a game postponed so far:

The nine teams that haven't:

*Nets, Knicks, Raptors and Bucks in the East

*Spurs, Nuggets, Lakers, Clippers and Kings in the West

The NBA has announced that 11 players out of 502 leaguewide tested for COVID-19 since Jan. 13 recorded confirmed positive tests … down from 16 the previous week pic.twitter.com/gYw5wbgTbF

The current plan is to make up postponed games in the second half of the season, which is set to begin March 11 and run through May 16, and does not yet have a released schedule. But the more games that go down, the tougher it gets to fit them in there. And there will certainly be some discussions ahead about how makeup scheduling affects individual teams’ rest ahead of the postseason as well. We’ll see how this goes for the NBA, but it certainly hasn’t been as smooth of a start as they’d hoped for.