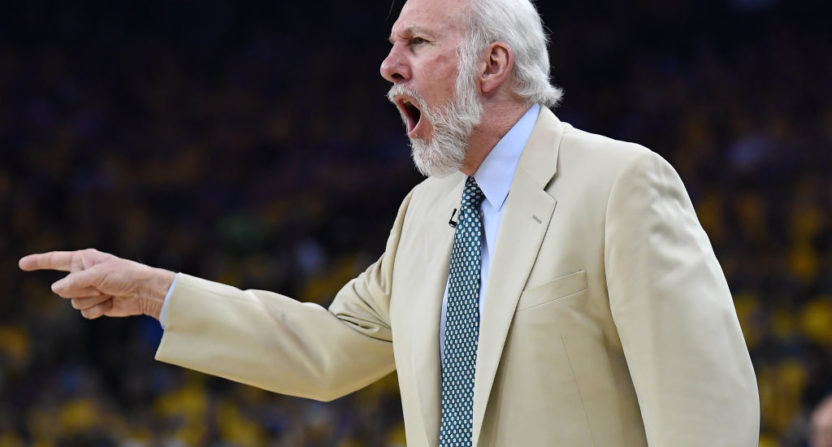 Gregg Popovich is typically famous for his lack of verbosity, but prior to Game 1 of the Western Conference Finals, the Spurs coach didn’t hold back when given an opportunity to talk about the current American political landscape.

Well, he did hold back a little: he didn’t mention the President by name. But that was the only nod to restraint from Pop. The question that prompted the rant centered around whether events in the world ever serve as a distraction from coaching. Here’s the response, as compiled by The Mercury News:

“Absolutely,” Popovich said. “It’s interesting that you would ask that, because usually things happen in the world and you go to work and you’ve got your family and you’ve got your friends and you do what you do, but to this day, I feel like there’s a cloud, a pall over the whole country in a paranoid, surreal sort of way.

“It has nothing to do with the Democrats losing the election,” he continued. “It’s got to do with the way one individual conducts himself. And that’s embarrassing, it’s dangerous to our institutions and what we all stand for and what we expect the country to be. But for this individual, he’s in a game show, and everything that happens begins and ends with him, not our people and our country. Every time he talks about those things, that’s just a ruse. That’s just disingenuous, cynical and fake.”

An extended silence fell over the press conference room after Popovich’s diatribe, but he broke the tension.

As to that last point, it was nice of Popovich to pretend that he hoped the game was a close one, but the Spurs came out firing, en route to a massive first half; they lead 62-42 at halftime. LaMarcus Aldridge has 17, and a returning Kawhi Leonard has 18; they look very good, and aside from a brief run fueled by a Steph Curry steal and 3, it hasn’t really been close at all.

Pop was furious it was even cut to 14 at one point, if you want to know how serious he was about hoping to avoid a blowout in either direction. Still, the Warriors are the Warriors; no team is better built to stage a massive comeback quickly, and the series definitely wouldn’t be over even if San Antonio held on for the blowout.

But what a statement regardless for the Spurs. Almost as impressive as the statement Popovich made before the game.