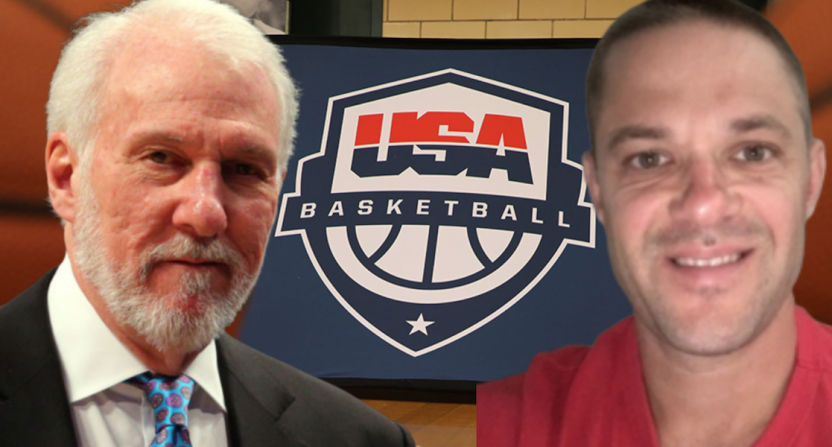 USA Basketball appears to be struggling amid preparations for the Tokyo Olympics. Monday night, Team USA lost its second straight exhibition game, falling to Australia, 91-83. That followed a 90-87 defeat to Nigeria on Saturday.

With a roster of NBA stars (and Olympic gold medalists) including Kevin Durant, Draymond Green, and Kevin Love, along with Damian Lillard, Jayson Tatum, Bradley Beal, and Bam Adebayo, Team USA’s performance in its first two exhibitions has been surprising. Why the squad has been disappointing so far seemed like a natural question to pose to head coach Gregg Popovich.

The Athletic’s Joe Vardon (identified by NBC Sports Washington’s Chase Hughes) did just that following the loss to Australia, actually asking Lillard about watching past U.S. Olympic basketball teams dominate the tournament while this year’s edition has struggled. But before Lillard could answer, Popovich took issue with the line of questioning.

“You asked the same sort of question last time,” said Popovich, “where you assume things that aren’t true when you just mentioned blowing these teams out, that’s never happened.”

Vardon tried to interject with numbers that backed up his question, but Popovich objected to being interrupted.

“Are you gonna let me finish my statement or not?” said Popovich. “So you’ll be quiet now while I talk. And then I’ll listen to you.”

Popovich talking down to a reporter never looks good, causing awkwardness and tension. He has been notoriously prickly throughout his career with reporters (though more so with in-game interviews) so his testy approach with Vardon isn’t a surprise. And it’s understandable that the coach would want to defend his players and maintain their confidence, especially in regards to games that don’t officially count.

But Team USA has lost four of its past five games in international competition, going back to the 2019 FIBA World Cup team that finished seventh in that tournament. Popovich also coached that squad, so perhaps he’s a bit sensitive about how his teams have recently performed in international play with him in charge.

Popovich didn’t say so outright because he was responding to a question about USA Basketball typically blowing out the competition. But many international opponents have NBA players too and surely want to beat their more acclaimed colleagues. Australia’s Patty Mills, who plays for Popovich on the San Antonio Spurs, scored 22 points, accompanied by Joe Ingles notching 17 and Matisse Thybulle adding 12.

Yet the United States has won gold medals in the past three Summer Olympics (coached by Mike Krzyzewski) and has already qualified for the Tokyo Games, so the team’s standing going into the tournament isn’t affected by these past two losses. Team USA will also be better after the NBA Finals are finished, with Devin Booker, Jrue Holiday, and Khris Middleton joining the roster.) And if Team USA wins gold again in Tokyo, losing to Nigeria and Australia will be footnotes in that story.