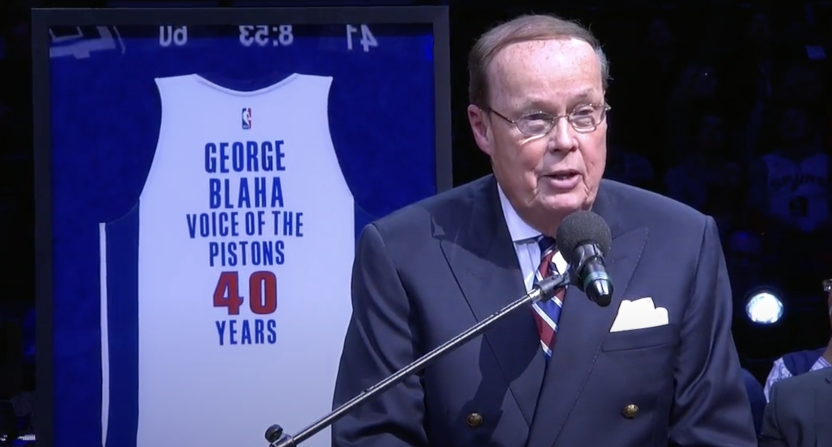 The Detroit Pistons announced on Sunday that longtime play-by-play announcer George Blaha will miss the rest of the NBA season due to a heart bypass procedure that is currently scheduled for March 15.

“George is part of our family and he and his wife, Mary, have our full support every step of the way,” said Pistons owner Tom Gores in a statement. “George is in the best of care and in great spirits. We join his many fans, friends, and colleagues in wishing him a full and speedy recovery.”

Blaha was been the voice of the Pistons on both radio and television since the 1976-1977 NBA season and currently calls games for Bally Sports Detroit. He also continues to call games on the radio when Detroit is nationally televised. He’s called over 3,200 regular-season games and over 260 playoff games, including all five NBA Finals appearances and three NBA Championships by the franchise.

In 2017, the Pistons commemorated Blaha’s 40th year with the organization with a halftime ceremony.

“I am disappointed to miss the remainder of the season, but my health is the number one priority right now and I have a great team of doctors guiding my short-term and long-term health,” said Blaha in a team statement.  “I’m grateful that they caught my issue early and they expect a full recovery.  I look forward to getting back to full speed with rest and rehabilitation during the offseason and returning next year for my 47th season calling games for the Pistons.”

According to the team, doctors identified the issue during a routine check-up earlier this week and they expect Blaha to make a full recovery.

Blaha is also the radio voice of the Michigan State football team, though it’s unclear at the moment if the surgery and recovery will impact that role when the 2022 college football season begins in September.

The 76-year-old was inducted into the Michigan Sports Hall of Fame in 2008. He’s been awarded the Ty Tyson Award for broadcasting excellence by the Detroit Sports Media Association and twice named Michigan Sports Broadcaster of the Year from the National Sportscasters and Sports Writers Association (2003, 2007).