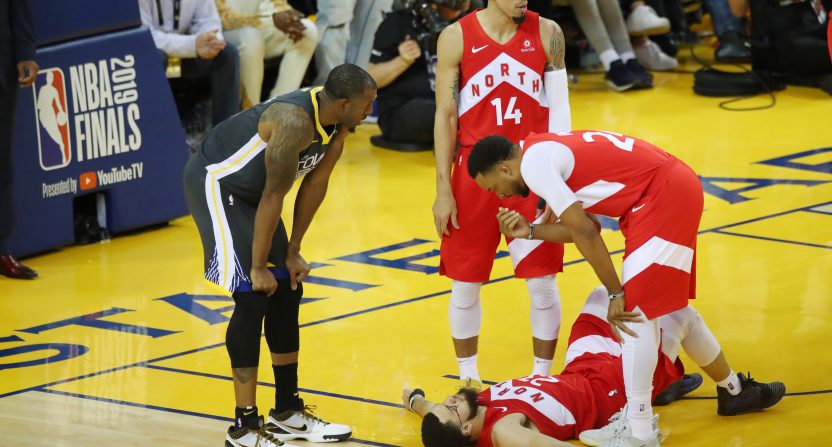 With the ratings already struggling thanks to a variety of factors (chiefly, the lack of an American home market), Friday’s Game 4 was always going to be a tough ratings win for ABC. It wasn’t an elimination game, Kevin Durant was still out, Toronto (and the millions of Canadians watching on the whole) don’t matter, and it was a Friday night in the summer.The overnight ratings confirmed that theory, as Toronto’s win pulled a 9.8, the lowest for an NBA Finals game in ten years.Via Sports Media Watch:

If you’re more of a visual person:https://twitter.com/paulsen_smw/status/1137422243133345792Worse for ABC/ESPN, the Raptors really look capable of closing out the Warriors in five games in Toronto, which few people would have bet on before the series, even knowing Kevin Durant would be out this long. A Finals missing one of the biggest stars in the sport, being won early by a team with a rabid fanbase that doesn’t really count for American TV numbers is not great at all! It’s not really a reflection of the league’s health or popularity (again, Canadian fans), but it’s not the end to the season that executives would have preferred. (For neutral fans sick of the Warriors, though, that’s another story.)Now, though, there’s the chance that people might tune in to see if the Warriors can pull their way back out of a 3-1 hole, a deficit they’re acutely aware is far from insurmountable. And if they do somehow force a Game 7, it would be hard to call it anything other than a great series.[Sports Media Watch]