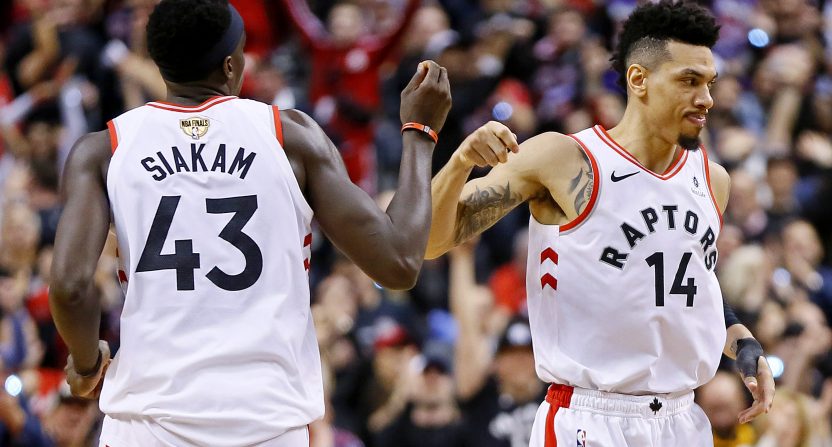 The Raptors took down the Warriors last night in Toronto to take a 1-0 NBA Finals lead, a welcome result for many people hoping for an end to Golden State’s dominant run, or at the very least a competitive series.

The “competitive series” camp probably includes many executives at ABC/ESPN, who for the first time are looking at an NBA Finals featuring an international team. Toronto is one of the biggest television markets in North America, but those viewers don’t do much good for American networks which don’t have Canadian broadcast rights. That’s important context for the overnight ratings, which would otherwise look bad not only for ABC, but also for the NBA’s health as a whole.

As Sports Media Watch notes, that’s the lowest rating for a Game 1 since 2009, and the lowest for any Finals game since 2013.

Typically, ratings are seen as a referendum on the overall popularity of a sport, as well as being a vital network metric. Obviously the former isn’t going to be as apparent this year; while there might be fewer fans in the United States watching, there are millions in Toronto who are definitely tuning in. The home market boost is key for any big series, and it’s important to make that adjustment when discussing ratings as a bellwether for league popularity.

In another interesting note, this was the lowest-rated Game 1 in the Bay Area during Golden State’s run of five straight Finals appearances.

SBJ's @JoshACarpenter dug out this comparison: local rating in the San Francisco-San Jose-Oakland TV market for Warriors Game 1s in the NBA Finals:

It’s less important to make that adjustment when discussing American television networks and how they might be reacting; it’s definitely a less than ideal scenario for them, but the numbers are still the numbers. There is one positive, though: Toronto won! As even the most ardent Raptors supporter would probably agree, a sweep is unlikely, so a series that goes at least five games (with the potential for more) would still end up being a much better scenario for ABC than a Warriors sweep would have been.