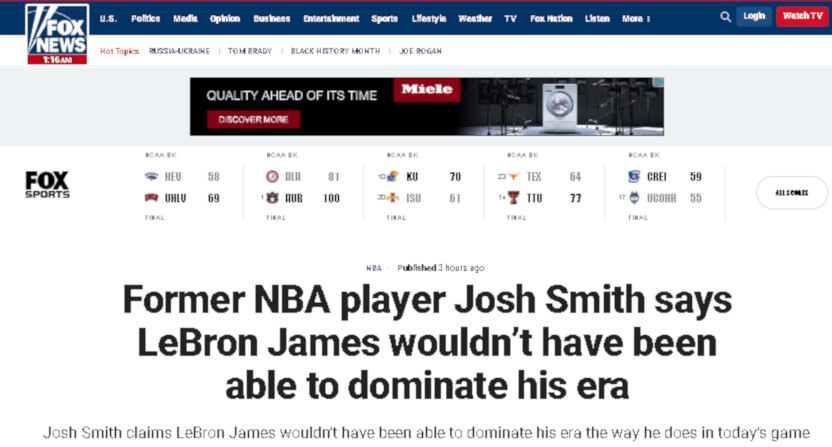 In this current era, where it appears like every media outlet wants to put fancy graphics of athlete quotes on their social media feeds (sometimes without proper attribution, which sometimes gets called out by athletes), it’s perhaps not surprising that some of the quotes that show up there might be of dubious provenance. That’s the case with a quote supposedly from former NBA player Josh Smith that was passed around Twitter Tuesday, coming from @BallsackSports.

That account had previously come to wide attention after Philadelphia 76ers GM Daryl Morey revealed that he kept tabs on @BallsackSports, leading to Philadelphia talk show host John Kincade buying the “ballsacksports.com” domain. (That did not give him ownership of the @BallsackSports Twitter account, which has as few connections to legitimacy as it has ever had.) But despite all that, a @BallsackSports Twitter post Tuesday purporting to contain quotes from Smith led to a Gary Sheffield Jr. writeup at Outkick (although, it doesn’t appear in the regular post catalog there), which then was syndicated at Outkick owner Fox News with a headline of “Former NBA player Josh Smith says LeBron James wouldn’t have been able to dominate his era.” Here is the original Twitter post:

As many of the responses there noted, it’s absurd to have Smith (in the NBA from 2004-2017) commenting on the NBA career of James (who’s played there from 2003 to the present) as from a different time. And that adds to the case for this being a fake quote. There’s certainly nothing we’ve seen from @BallsackSports to suggest they actually pulled off an interview with Smith. But that did not stop Sheffield from writing this up as if it was exceptionally real, and it did not stop FoxNews.com from picking it up. Some highlights from that piece:

I’ve covered some asinine quotes in my two years at Outkick, however this statement from former NBA player Josh Smith blew me away. The power forward claims LeBron James wouldn’t have been able to dominate his era the way he does in today’s game.

“It’s a different game back then,” Smith said. “Much more physical. I don’t think he has the jumpshot or skills to really consistently dominate defenses then as he does today. There’s so much spacing in today’s game. We had 2-3 guys on a star player any given night. Nothing was easy.”

Now I know some folks reading this are thinking ‘Yeah, LeBron doesn’t have the physical toughness to play “old school” basketball, which places you on Josh Smith’s side. And I’m here to share some crippling news for those on that train:

It’s called jealousy. Want me to prove it? That early 2000s NBA Smith alludes to that “didn’t have as much space as today’s game” is largely because of players, like Josh Smith, lacking skill. The reason we see three-point shooting and “spacing” like we do in the present is because NBA GMs demand it to accommodate their star talent. Spacing, objectively speaking, helps star players avoid double and triple teams to more easily impact the game. That’s strategy, not a “soft league.”

And let’s not forget Josh Smith just said “back then”, that implies he played in an era prior to LeBron James. That’d be false. Smith was drafted in 2004 — otherwise known as the year AFTER LeBron James. Perhaps he’s just upset James worked at his game and continues to dominate in year 18 while Smith plays in Japan or whatever the hell he does with his time these days.

Plenty of Twitter accounts have tried to deceive in the past, and many of them have been successful. And this looks like the latest entry in that lineup. It’s notable that after Fox News published that story, the @BallsackSports Twitter account posted several tweets making fun of that story and saying it wasn’t real:

To be fair, SI is in your bio and I got them too? https://t.co/qHgoyOei4X pic.twitter.com/fb5VEnewWa

Again, former NBA player Josh Smith does not appear to have actually said this. It’s just in a Twitter graphic from @BallsackSports. And that was enough for an Outkick article, and then for Fox News syndication of it. That does not seem ideal. And it may be interesting to see if the real Smith weighs in on this, and what he says.