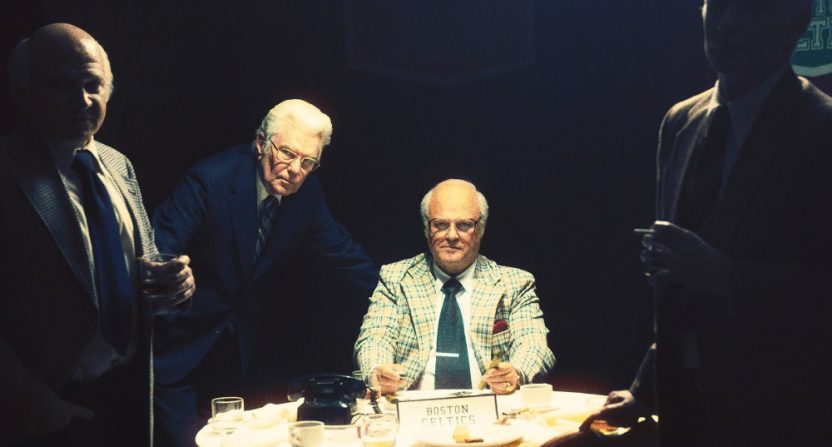 If there were ever an actor born to portray Red Auerbach, it would be Michael Chiklis. In the upcoming HBO series Winning Time, the Boston-area native plays the legendary Boston Celtics coach and general manager.

He wasn’t expecting this role, but he was prepared for it. Chiklis grew up in Lowell, Massachusetts, 34 miles from Boston. His father told him all about the Celtics and the architect of their greatness: Auerbach, who won nine NBA championships as a coach and seven more as an executive. When Chiklis went to Boston University in the 1980s, he had a front-row seat to the heyday of the Celtics-Los Angeles Lakers rivalry.

Winning Time details the rise of the Magic Johnson-led Lakers, who faced the Celtics for the NBA championship three times in the ’80s. Chiklis is best known for his Emmy-award winning role as Vic Mackey in The Shield. Now he will be introduced to a new generation as Auerbach.

“This has been nothing but a thrill and a joy,” the 58-year-old said of the role.

I wish my father was around to see this. He loved the @celtics and thought Red was a genius. What a treat, both as an actor and a guy from the Boston area to play him. https://t.co/uyq4HrXFbw #WinningTime @winningtimehbo @Lakers

It all began with a trip to Boston. Chiklis had never met Adam McKay before. But when the director asked him to make a cameo in Don’t Look Up, Chiklis flew to New England, where the Netflix production was being filmed.

Since it was a small part, Chiklis was only on-set for one day of shooting.  When it was over, McKay revealed a surprise.

“He said, ‘you should go talk to your agent because I just offered you the role of Red Auerbach in the Lakers series I’m doing for HBO.’” Chiklis said. “I looked at him and said, ‘don’t fuck with me.’ He said, ‘I would never fuck with you.’ Sure enough, he made this offer.”

Chiklis added: “I don’t know if he had planned this all along or if while he was watching me on the monitor, he realized ‘Oh, this is my Red Auerbach.’ You’d have to ask him. I don’t know. Either way I was just really thrilled for another opportunity to work with him. Especially for something I felt so connected to as a sports fan and a Bostonian.”

Chiklis has portrayed legends before. He played John Belushi in the 1989 film Wired and Curly Howard in the 2000 television movie The Three Stooges. This was different. A little more pressure. Chiklis wasn’t kidding when he said: “I want to be able to go home so I had to get this right.”

Long before Bill Belichick, Auerbach was the prominent sports executive figure in Boston. Sure, like Belichick, he benefited from great players. He coached Bill Russell and drafted Larry Bird. But there was also a mystique around his success that intimidated and perplexed his rivals. Auerbach would famously celebrate victories by lighting up a cigar.

Often before the game was officially over.

Chiklis was familiar with Auerbach. Still, he knew he had to do research to deliver a nuanced character. He did the work, reading books and newspaper clippings, and studying archival footage. He also learned valuable lessons from his experiences with Wired and The Three Stooges.

“If you come at these portrayals from a place of authenticity, deferential respect, honor and admiration, and then you throw yourself at it, then you’re pretty safe,” he said. “I’m not coming from a place of doing harm, being salacious or being hurtful. It’s really about doing an honest portrayal of this person.”

Chiklis described Auerbach as a “progressive person” who understood how to connect with people.

“One of the reasons I think he was so successful was that he had an incredible rapport with his players,” he said. “They loved him, respected him, and admired him. He gave them agency. Made them feel like a part of the team and that they had a say in it. They weren’t just plebes that played for him.”

Sports fans undoubtedly will be curious to see Chiklis’ interpretation of Auerbach. Winning Time is one of the most highly anticipated HBO sports dramas in recent memory. Chiklis is part of a star-studded cast that includes John C. Reilly, Adrien Brody, Jason Clarke, Jason Segel and Sally Field.

When asked whose performance stood out to him, he pointed to John C. Reilly who plays Lakers owner Jerry Buss. Reilly’s most popular roles are in comedies such as Talladega Nights, Step Brothers and Wreck-It Ralph.

“John C. Reilly is a revelation,” Chiklis said. “He’s a guy that is sort of underrated. Not by actors but in general. He’s equal parts dramatic actor as he is comedic actor. He’s able to slip seamless between genres and fuse them. I think he’s a brilliant talent.”