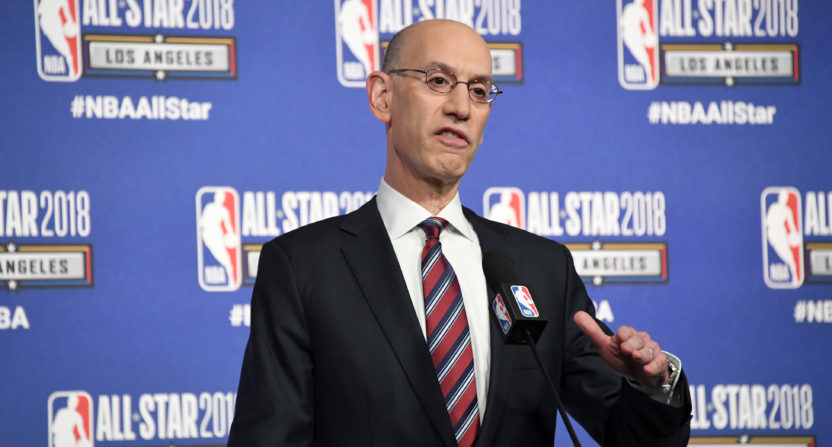 A key question for broadcasters heading into the NBA playoffs is “How good will the ratings be?” Regular-season ratings have been quite strong this season, both locally and nationally, but there’s some doubt if that will continue into the postseason, with several big markets missing out entirely and questions about how far other strongly-rated teams will go. Injuries to stars like Kyrie Irving, Steph Curry, Kawhi Leonard, and Joel Embiid could also be a factor on a few fronts.

The East playoff field is pretty much set, and while there’s still a little uncertainty in the West, we have a good idea who’s going to be in and out. So let’s take a look at market size and injuries and how they compare to past years.

First, there’s overall market size. Unless the Clippers (currently in 10th in the West, two games back of the Pelicans for eighth) can sneak into the playoffs, the three biggest U.S. TV markets (New York, Los Angeles, Chicago) won’t have a team in the postseason.

Since the Bulls’ formation in 1966, either they, the Lakers, or the Clippers have been in the postseason every single year. (In fact, 2015-16 is the only year where both the Bulls and Lakers missed, but the Clippers made it.) Also, the Lakers were in the playoffs every year from moving to Los Angeles for the 1960-61 season through 1966, so there has never been a year before this with L.A. and Chicago teams where all have missed the postseason. And that’s to say nothing of the New York teams.

Now, the Knicks haven’t made the playoffs since 2013 and the Nets haven’t been there since 2015, so it’s been a few years recently without a New York team. But the Bulls have been a reasonably regular playoff presence (they’ve appeared in eight of the last nine postseasons, only missing in 2015-16). And while the Lakers haven’t made the postseason since 2012-13, the Clippers haven’t missed it since 2010-11.

While market size alone isn’t everything (especially considering that not all of New York is watching the Nets and not all of LA is watching the Clippers), the absence of the top three markets would seem a bit worrying for broadcasters.

Below that, from a market standpoint, it is significant that fourth-ranked Philadelphia will be in the playoffs for the first time since 2011-12, and sixth-ranked Washington, seventh-ranked Houston, eighth-ranked San Francisco-Oakland-San Jose, and 10th-ranked Boston will be there too. But fifth-ranked Dallas won’t (the Mavs last made it in 2015-16), and neither will ninth-ranked Atlanta (the Hawks were in the postseason last year). And below 10th, it’s a pretty substantial drop, with the next involved markets being Minneapolis-St. Paul (15th), Miami (16th), Denver if they make it (17th), and Cleveland (20th).

There are also some not-so-great markets from a U.S. national TV perspective involved. That’s most notable with Toronto (which would come in between Chicago and Philadelphia from a market population standpoint, but produces no local ratings for U.S. broadcasters thanks to games being broadcast on Canadian channels and the existence of simsub regulations, a big reason why the Raptors don’t have more appearances on U.S. national broadcasts during the season), and the likely-to-be-first-seeded Raptors making a deep run could be real bad news for U.S. TV networks. (But great news for the Canadian ratings, obviously.)

Now, it should be noted that a bigger-market team doesn’t always outdraw a smaller-market one. Teams like the Cavs, Spurs, and Thunder drew some of the largest percentages of local fans watching their games this year, so that could perhaps help their markets (19th, 31st, and 41st nationally) punch above their weight.

All of those teams have some national drawing power thanks to their stars, something that’s perhaps especially true for the Cavs with LeBron James but is true to an extent with the Spurs and Thunder too. But there are other teams here like the Raptors and Pelicans that might be even more concerning for broadcasters.

And the injuries add up on a couple of fronts. First, a lot of the NBA’s popularity is about its stars and about their matchups, and it’s not hard to envision, say, less neutral fans caring about a Celtics’ series without Kyrie Irving. But beyond that, it’s notable that the injuries to Irving (who will miss the playoffs), Embiid and Curry (who still have questions about their playoff readiness) in particular are affecting teams from top-10 markets, teams that would theoretically be some of the best ratings draws.

Moreover, the Warriors in particular are regularly a top national draw, so if they don’t make it back to the Finals, that could be another area where ratings are potentially lost.

Could the ratings work out just fine? Sure. Maybe some of the smaller-market teams will produce great numbers, maybe we’ll see some compelling matchups that go seven games, and maybe there will still be a Golden State-Cleveland Finals bringing in tons of viewers, or an alternative that does well itself. But heading into the postseason, there are certainly some reasons for broadcasters to be concerned. We’ll see how it plays out.