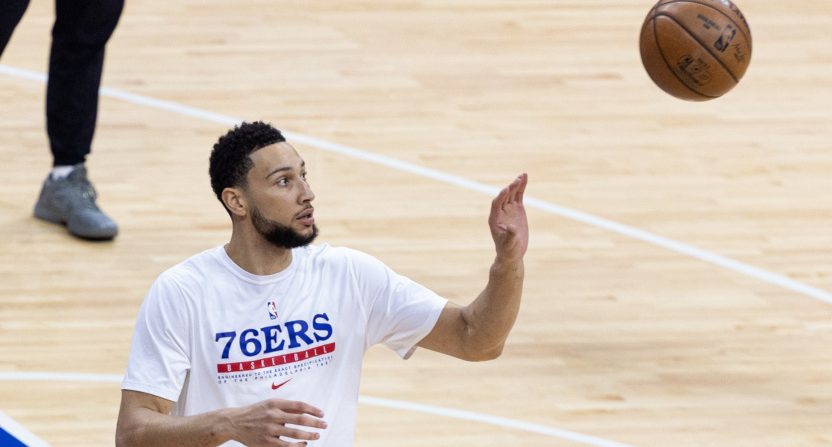 In any form of news that incorporates information from other people or outlets, it’s important to be extremely careful with sourcing. That’s led to condemnation for outlets like ESPN for actions like not including links to a podcast when quoting it. But there’s a bigger issue still when it comes to attributing information that the original source didn’t actually report. And that’s what Pennsylvania columnist Tom Moore (of The Bucks County Courier-Times and The Intelligencer (from Doylestown, PA)) took issue with FanSided for Friday:

.@FanSided @BraulioEPerez Your story claiming I wrote that Ben Simmons would be fined $308,000 per day that he doesn’t report to Sixers camp is inaccurate. I did not give a number. Please correct this. Thanks.

Here’s the FanSided story in question, which was published Thursday, and which very definitely attributed a $308,000/day figure to Moore:

Moving forward, the team is planning to have Simmons suit up for the squad in 2021-22 too. With that said, Simmons remains unhappy with his current situation. Knowing this, per Tom Moore, Philadelphia will be ready to fine Simmons for each day he doesn’t report to training camp.

#NBA source: The #Sixers 'are expecting (Ben Simmons) to play (in 2020-21). The expectation is they will. It's bumpy right now (& the team expects it) to get better.' The #76ers don't plan on making a deal that would drop them back in standings & not getting viable offers. pic.twitter.com/QUMmzkKbKF

Indeed, Moore is reporting that the 76ers will be ready to fine Simmons $308,000 for each day he’s not at camp this fall. With things set to start later this month in Camden, it’s completely up in the air if Simmons will show up.

But the story somehow felt very confident in that number for Simmons (seen above warming up ahead of a playoff game against the Atlanta Hawks in June), even including it in its URL: https://fansided.com/2021/09/16/76ers-plan-fine-ben-simmons-308k-per-day-camp. And it felt very confident in attributing that number to Moore, with a “Moore is reporting.” It’s unclear how this happened, but it’s certainly not a good look for FanSided or Perez. And it’s unfortunate that Moore had to publicly blast them on Twitter for attributing something to him that it doesn’t appear he actually reported.

(Update: FanSided later removed that number from their piece.)