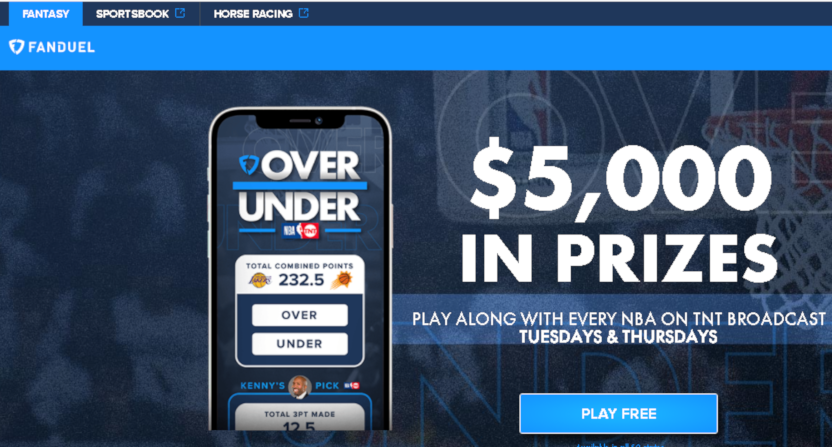 FanDuel Group has made some interesting marketing moves recently, signing deals with media companies from Turner to Entercom to The Ringer and with individual personalities from Charles Barkley to Pat McAfee to Rob “World Wide Wob” Perez. The latest figure they’ve added is one of Barkley’s long-time compatriots on Turner’s Inside The NBA, Kenny Smith.

FanDuel has signed a multi-year content partnership with Smith that will see him appear in ads and TNT promotions for the company, provide unique content for FanDuel’s social media channels, and be involved in a new free-to-play game that FanDuel is launching exclusively for Turner. That game, dubbed Over/Under and available here, will be part of TNT’s NBA broadcasts each Tuesdays and Thursdays, beginning tonight with the Boston Celtics-Brooklyn Nets clash; it will see eight to 12 over/under questions each night, with fans able to test their knowledge alongside Smith and with $5,000 in prizes available each night.

Mike Raffensperger, FanDuel Group’s chief marketing officer, spoke to AA Wednesday about this new deal with Smith, and about FanDuel Group (which also includes Betfair, DRAFT, and TVG)’s wider approach to signing individual media figures. Raffensperger said that Smith’s combination of knowledge and humor made him an excellent fit for an individual FanDuel deal, one that will let FanDuel do more with him than they had just under the previous Turner deal.

“First of all, Kenny is just a great, awesome person, and I think FanDuel is really happy to be aligning ourselves with him in more of an official endorser and spokesperson role. We have the TNT partnership and he’s marquee talent within that show and engagement with FanDuel is a part of that, but there are things we want to do outside of that in extending that relationship.”

Raffensperger said Smith will play a key role in the new Over/Under game.

“He’ll be helping us create questions, and there will be his questions of the night. And as we go through time, there will be other ways we can get him more deeply involved, actually using him as talent to help voice some of our promotions around the game. There are some really exciting things we have in store from a direct relationship with Kenny; there’s social media we want to do with him, there’s content we want to develop with him.”

He said this new game is important as a way to emphasize FanDuel’s free-to-play offerings, which (unlike some of their betting offerings) are available across all U.S. states, and which can fit in well as a second-screen experience for those watching game broadcasts.

“We feel really strongly about giving people more ways to win on FanDuel, and that stretches across our sports betting product and our fantasy product. No matter what state you live in, all 50 states, we wanted a really approachable, really fun way to deepen your engagement with the TNT broadcast and do that through FanDuel. And one thing FanDuel does really well is make great games and make good second-screen experiences.”

“Whether you’re on Twitter or playing a fantasy product or this new free-to-play game, it’s a second-screen experience you can use on your phone while watching the game. And TNT partnered really closely with us on how we can make the game simple, approachable, and easy to play for as many people as possible, and then actually working to integrate it into the broadcast through Kenny and Charles. We think it’s something really unique in the marketplace that no one else has done in quite that same way, this combination of talent, integrated gameplay, and integrated broadcasting experiences.”

Raffensperger said this expanded deal with Smith grew out of the Turner deal, which has been a good fit for both sides.

“I’m really appreciative of our Turner and TNT partners who understand that FanDuel is a little bit different then some other advertisers. Having a relationship with some of their marquee talent makes sense for us. Charles Barkley was someone we announced earlier, and now Kenny’s coming alongside his colleague, and we’re really excited about that.”

And he said that this move with Smith made sense as a way to strike a deeper partnership than just hiring someone for an ad.

“He’s a famous, well-liked celebrity. We love having an association with someone like that. We think he’s excited to partner with us, make these games, play alongside the fans at home. It’s a way of having a more experiential marketing apparatus. …There’s something really unique about a relationship that someone like Kenny has with fans all over the country, and to give him an opportunity and his fans an opportunity to engage through a platform like FanDuel, I think that’s really special.”

The Over/Under game can be found here.