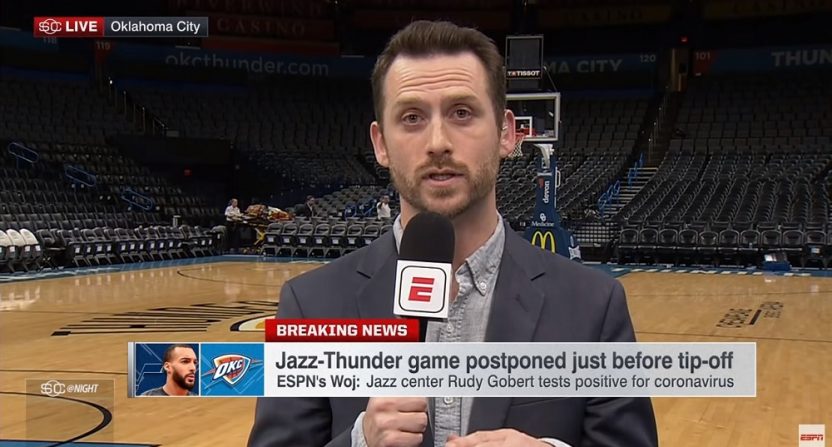 Though it may seem like a month ago, it’s been just one week since Utah Jazz center Rudy Gobert tested positive for the coronavirus, the NBA season was suspended, and the sports world suddenly came to a stop.

Millions were watching the events unfold that evening, either on TV or social media, and realizing in real time that everything was about to change in ways we’d never really seen before. ESPN NBA reporter Royce Young was at the center of all that, reporting from inside Oklahoma City’s Chesapeake Energy Arena and doing live hits on SportsCenter. Young spoke to Awful Announcing on the phone to recount a chaotic, unprecedented evening that sports fans will remember forever.

At the time, the NBA was trying to keep things as normal as possible. Media were barred from the locker room and had to keep a safe distance from players and coaches in interview rooms for podium-style press conferences. The league was seriously considering barring fans from games the next day, but that night a large crowd was expected.

“We were going into it that it might be the last one, at least with fans,” Young told AA.

Young was set to do a live segment for the 6 p.m. Eastern (5 p.m. central), SportsCenter with Stephen A. Smith to describe what this new coronavirus atmosphere was like at an NBA arena. What he observed was how fans were still interacting with each other like normal, not really concerned with spreading the virus.

“One image that sticks out to me, is that the pregame hype-up crew has this extendable basketball goal that somebody was wearing on their back and they would throw that soft ball to fans,” Young said. “And each fan was touching the ball and shooting it. Now you’re hyper-conscious of all these things.”

Ironically, he said, Young was watching Jazz guard Donovan Mitchell, who also later tested positive for coronavirus, go through his pregame warmup routine from afar and saw all the ballboys touching the basketball. He thought about writing a story on how the NBA could possibly disinfect the basketballs with every player touching it, including ones who bite their nails on the bench or take their mouth guards in and out.

“At that time, the context was the media and the fans were kind of the infected ones. We were the ones that might be carrying it and we had to protect the players,” Young said. “Obviously, it kind of turned out to be the inverse.”

With the 7 p.m. local start time approaching, Gobert was still questionable to play because of what Utah called an illness. It was a big regular season game, with the two teams fighting for the fourth seed in the Western Conference and home court in the first round of the playoffs. That’s why Young had the pregame SportsCenter hit in the first place.

Young has the ability to use an in-house ESPN TVU app on his phone, where he can connect to a satellite and do a solo TV hit where you’re your own writer, producer, and sound man. He was comfortable with that arrangement, but was relieved when ESPN said a crew led by producer Pat Abrahams was coming over from nearby Norman, where it was shooting the University of Oklahoma football team’s pro day. It allowed Young to focus on what would transpire that night.

As the game was about to begin, Young saw Thunder head doctor Donnie Strack run onto the floor and realized something was really, really off. This certainly had something to do with the coronavirus, he thought. And in covering OKC on a daily basis, Young was positioned to be one of the only people who really knew who Strack was.

He possessed an additional advantage by being at one of the few NBA venues that still gives media courtside seats. That allowed him to not only definitively see Strack, but also hear what people were saying. Young heard Strack talk to Ben Taylor, one of the game officials, who then in turn spoke to the arena’s public address announcer.

“I hear Ben Taylor say the league is asking us to suspend the start of the game,” Young said.

The players then waved to the fans and walked off the court, with nobody really knowing what was going on. Rumors swirled, however, that it may be related to Gobert. Abrahams then called Young and told him ESPN wants him on the air ASAP.

“We tried to set up right outside the Jazz locker room, but they wouldn’t let us go back there for obvious reasons,” Young said with a laugh.

Young and Abrahams went to the loading dock near the court where the team buses enter and exit the arena, naively thinking that they could have a live shot of the players leaving. As it turned out, no player would leave the premises until many hours later.

“Rudy Gobert had been tested for the coronavirus and was still questionable for the game,” Young said, noting how absurd this seems a week later. “He was still gonna possibly play!”

Young said his first SportsCenter hit from the loading dock was at about 8 p.m. central time, about 15 minutes after the Thunder-Jazz game had been postponed. He put his earpiece in to listen to ESPN programming before he’d get introduced to come on the air and heard something unfamiliar.

“I was hearing Doris Burke talking. I keep hearing a game,” Young said, wondering what was going on. “I’m not hearing SportsCenter.”

That’s because ESPN was going to a split screen and showing SportsCenter while Ryan Ruocco, Doris Burke and, Tom Rinaldi called the regularly scheduled game between the Denver Nuggets and Dallas Mavericks.

Young relayed what he knew: that it was likely related to an illness with one of the Jazz players. At just before 8:30 central, the world found out that not only had Gobert tested positive for coronavirus, but that the NBA season had been indefinitely suspended. Young was calling and texting the ESPN folks from the loading dock, learning that both teams were essentially quarantined in their locker rooms.

“You’re sitting there and realizing this is not just a moment in NBA history, but history period,” Young said. “And realizing we’re gonna be here all night.”

Information was coming quickly from so many different sources and angles, but Young’s main priority was being 100 percent sure of something before he relayed it to a national audience wondering what the hell was going on.

Oklahoma health officials arrived on the scene at about 10:30, which was when Young knew something really real was going down. Arena security closed a black curtain in front of a section of hallway as health officials huddled in one of the tunnels to formulate a plan. Suddenly, nurses in scrubs were in and around the locker room area. That was around the time Young did a SportsCenter appearance with John Anderson.

Young was trying to balance keeping up with the news and information while it happened for SportsCenter while also writing, in short increments, a story for ESPN.com from ground zero of the new sports landscape.

“Our news desk was so gracious and patient with me that night,” he said. “I know they were probably champing to ‘give us your story, give us your info.’ But the problem was so much was evolving throughout the night. So if I had sent in a story immediately, or very quickly, we would’ve missed out on a lot of details. They understood that really well.”

Young said Scott Van Pelt did really well teeing him up on SportsCenter the rest of the night, letting him riff off the information he had at that moment.

“He was just like ‘tell me what you saw,'” Young said. “It was a mix of being super confused about what was going on, while also trying to kind of relay back what I did know.”

In that moment, there were plenty of things that no one— including league and team officials— knew the answers to, Young said. For the NBA and the sports world at large, this was kind of an unprecedented scenario.

While the Thunder left the arena a couple of hours earlier, Utah’s team buses didn’t depart until about 1:15 a.m local time. Young then had to write, get edits on and shoot a video essay for the Thursday morning SportsCenter. He finally made the 15 minute drive home at about 3:20 a.m. to take a nap, since his never-ending night wasn’t over. Young had to be back at Chesapeake Energy at 5:30 for appearances on SportsCenter and Get Up!

Looking back on it a week later, Young will always remember the bizarre nature of that night and its global impact.

“This is a human story. This is a worldwide story,” he said. “I can’t imagine anything will ever even touch that for the rest of my career. Hopefully doesn’t.”

While there are many things Young wished he could’ve done better that night, he said he’s flattered and appreciative of all the praise and support he received that night, that it energized him at the time. He felt it was his responsibility to see what he saw and relay what he heard to an audience of millions who were slowly realizing that this was the last night of sports they’d have for months.

“I thought a lot about it the next 24, 48 hours, thinking that was a huge deal,” Young said. “People are probably going to remember that I was there. And I hope I met the moment.”