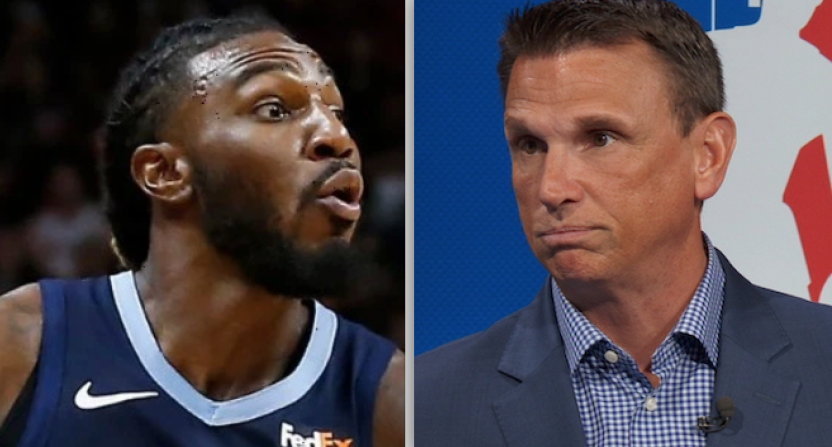 The NBA is trying to return to some sense of normalcy days after the shocking death of Kobe Bryant. But emotions are still raw and players continue to work through their respective grieving processes. Maybe that contributed in part to some unfortunate ugliness at the end of Wednesday’s Grizzlies-Knicks game at Madison Square Garden.

With less than a minute left in the game and Memphis holding an 18-point lead, Grizzlies forward Jae Crowder stole a listless pass attempt by the Knicks then dribbled to the corner to take a three-pointer. Knicks guard Elfrid Payton shoved Crowder in the chest as he shot, sending him to the floor. As Crowder tried to retaliate, Julius Randle, Marcus Morris, and Damyean Dotson jumped in to defend Payton and a fight nearly broke out on the court.

Here’s a clip of the mini-melee:

The Knicks and Grizzlies got into it ? pic.twitter.com/ysQO5S7aWC

As chaos threatened a civil end to the ballgame, Knicks fans at Madison Square Garden took the opportunity to shout their frustrations at James Dolan, chanting “Sell the team!” as the team owner left his seat. (Dolan being Dolan, he pointed out a nearby teenage fan who was chanting and directed security to take care of him, according to the New York Post‘s Marc Berman.)

ESPN NBA analyst Tim Legler weighed in with his opinion of the fracas, criticizing Crowder for taking an unnecessary three-point shot when the game was already decided and the clock just needed to run out.

My take on the hostilities tonight bw @nyknicks and @memgrizz. What the hell was @CJC9BOSS thinking? Seriously. And if someone says “play til the final buzzer” then I know they have never played ? at any level. 18 point lead? :50 left? Stealing the inbounds? Shooting a 3? ??

Knocking Crowder for continuing to play until time ran out is a curious take and later, Legler said that Crowder would’ve reacted the same way Payton did had the situations been reversed. But there’s a point to be made about sportsmanship and not rubbing an imminent loss in the opponent’s face. But maybe there’s also something to be said for having some fun and Crowder taking an opportunity for some easy points (he had 18 for the game) while also maybe nudging his three-point shooting percentage (which is 30 percent on the season) up a bit.

As could be expected, Crowder didn’t care for Legler’s remarks and clapped back at him on Twitter.

AYE TIM WITH ALL DUE RESPECT I ONLY PLAY ONE WAY AND THATS HARD TIL THE BUZZER SOUNDS. IM SORRY IF IT DISGUSTS YOU. I KNOW KNICKS ARE YOUR TEAM BUT U SHOULD TELL THEM TO PLAY HARDER AND LESS TALKING.! ??‍♂️ https://t.co/fIRXKBGJmK

But let me ask you, knowing how much you care about the game, what would you have done if you were on the court and the situations reversed?? Cmon man you know you would have gotten heated

Amid a thread of tweets continuing his thoughts on Crowder’s conduct, Legler pushed back on the assertion that he’s a Knicks fan.

People making me laugh as if I care about @nyknicks. Zero allegiance. Never played there. Don’t talk about them on the air EVER ? it wouldn’t matter who the team or player is… the other team is going to respond.

Curiously, he also said he believes that there’s no such thing as running up the score in pro and college basketball. Yet Crowder didn’t respect the NBA’s “end-of-game culture” by acting as if the game was still in doubt. That’s an intriguing stance, though it can certainly be argued that Crowder’s play was unnecessarily aggressive when the Knicks were in surrender mode for an outcome already decided.

One development that could have further repercussions following the near-brawl is the Knicks’ Marcus Morris commenting that Crowder displays “female tendencies on the court.”

"He's got a lot of female tendencies on the court, flopping and throwing his head back…he's soft, very woman-like"

The NBA may have something to say about Morris’s hostile, distasteful remarks. But he did eventually apologize for what he said and perhaps deserves some benefit of the doubt for being angry and upset after circumstances nearly became violent.

I apologize for using the term “female tendencies” I have the upmost respect for women and everything they mean to us. It was a Heat of the moment response and I never intended for any Women to feel as though in anyway I’m disrespecting them. Again I apologize with my comments.

Maybe the Knicks players needed to cool off with a cold shower the same way Grizzlies players were forced to after the game.

Ja Morant says there’s no hot water and only 3 drops of water coming out of the Knicks visitor showers.

The Grizzlies are actively trying to get both hot water and water pressure to take showers right now.